Home » Sultan Erdoğan is moving away from the West 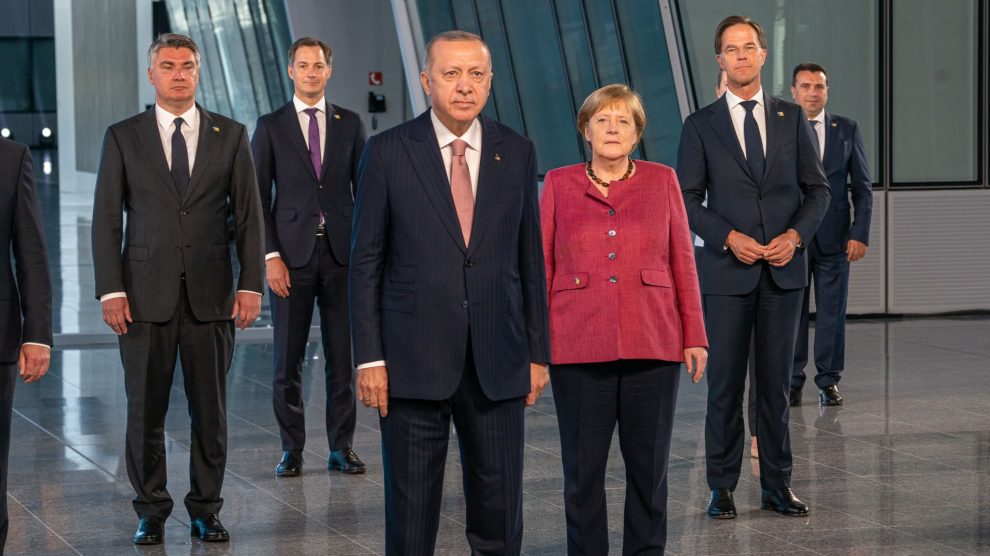 How will he explain the expulsion of Western diplomats at the Rome G20? An analysis by Ambassador Marco Marsilli, scientific advisor at the ICSA Foundation, former permanent representative to the Council of Europe and director of global issues and G8 / G20 processes at the Foreign Ministry

With an unprecedented decision, both for the number of foreign diplomats involved and the motivation behind it, Turkish President Recep Tayyip Erdoğan declared persona non grata ten Ambassadors residing in Ankara. It’s the first step towards expulsion from the country, to be carried out in a very short time.

The “new Sultan”’s axe struck the Heads of Mission of the United States, Canada, France, Germany, Finland, Denmark, Holland, Sweden, Norway and New Zealand. They were “guilty” of signing an appeal for the liberation of anti-regime philanthropist Osman Kavala.

The latter has been detained for over 4 years, without trial, in a maximum-security prison, as authorities considered him an active supporter of Iman Fetullah Gulen. His release was requested by a sentence of the European Court of Human Rights – which obviously remains unexecuted – pronounced in 2019 and confirmed in March 2020.

Currently, an unspecified but nevertheless very high number of political prisoners (in the tens of thousands) is languishing in the Turkish prisons, representing almost all social classes and professions. Many of them are suspected of having been involved in the failed “coup d’etat” of the summer of 2016.

Osman Kavala is is one of them. He is close to the Hungarian-American tycoon Georges Soros, whose organisation – the Open Society Foundations – was banned from the country three years ago. He opposed Erdoğan in 2013, too, when he led the popular protest on the “Gezi case” (which revolved around a public park subject to real estate speculation), which was brutally repressed by police forces.

As a professional entrepreneur, Mr Kavala was never involved in political or party issues and, by general admission, is devoid of ambitions in this regard. His profile does not seem to live up to the draconian measures adopted by Turkey, which are inevitably poised to create yet another deep rift between the Anatolian authorities and the West.

However, this evaluation obviously does not take into account one interpretation of reality: that of the Turkish autocrat, which is increasingly unilateral and arbitrary, pushing him to impose his will (identified, obviously, with national interest) and ruthlessly eliminate any obstacle standing in his way.

It’s highly probable that domestic factors are not extraneous to Mr Erdoğan’s attitude; traditionally, the external enemy serves to divert attention from contingent problems, which in this case is a decidedly worrying economic situation.

The logical consequence is the fact that, at this particular moment, almost no sector is protected from critical issues (regardless of their importance) along the main lines of Ankara’s foreign policy.

With regard to the United States (a similar discourse applies to NATO), their relations with Turkey appear heavily conditioned by Ankara’s exclusion from the F-35 fighters military cooperation programme, which in turn is due to Turkey’s previous (and provocative) purchase of the S-400 missile defence system from Russia. Contributing to the sheer coldness is also Washington’s refusal to extradite Iman Gulen, seen as the “mastermind” of the failed coup.

As far as the European Union is concerned, accession negotiations have stalled for years (the designation of Turkey as a candidate country dates back to 1999). Two events from the current year my have halted the process irreversibly: the pronouncement with which the European Parliament denounces “Ankara’s increasingly marked departure from the values ​​and standards of the EU” and a more recent report by Brussels which, among other objections, expresses (with full justification) serious doubts about the independence of the Turkish judiciary. It is no coincidence that the President of the European Parliament, David Sassoli, was among the first to react to Mr Erdoğan’s new challenge speaking of “authoritarian drift.”

Meanwhile, the Council of Europe is faced with the umpteenth and contemptuous fin de non-recevoir coming from a country which is always reluctant to implement its obligations, but is still a full member state. The body could declare that its patience has exhausted and verify the possibility of carrying out the disciplinary procedures enshrined by its statutes.

Turkey grants hospitality to nearly 4 million refugees, most of them Syrians, mostly thanks to generous funding from the EU. It also provided military support to the UN-backed Government of Tripoli, without which General Haftar‘s troops would have ended up controlling the entirety of Libya. While holding some positive value, these two factors cannot counterbalance relations between Turkey and the West, which are strongly compromised and close to historical lows.

This situation will be tested in a few days, on October 30-31. President Erdoğan is expected in Rome to participate in the G20 Summit along with the other Heads of State and Government. A successful multilateral exercise: the Italian G20 Presidency has been well received so far, particularly because of the attention it reserved for the Afghan dossier.

If the “new Sultan” cannot escape from embarrassing explanations about the recent, dramatic devaluation of the Turkish lira, the consequences of the new diplomatic “stress test” he boldly imposed on an already precarious background are uncertain.

For his part, Italian Prime Minister Mario Draghi – who will direct the final and most important event of the Italian-led G20 with his usual competence – will find confirmation for the definition he himself applied to Erdoğan in the aftermath of the humiliation inflicted on the President of the EU Commission, Ursula von der Leyen, during her official visit to Turkey last April.

“A dictator” is how Mr Draghi described Mr Erdoğan back then, attracting wide-ranging criticisms for the “undiplomatic,” “excessively “outspoken” language. Six months later that unworthy episode, the facts are proving him entirely right.

What Putin (really) thinks about women. A story by Fiona Hill
Gentiloni explains the EU’s China shift and Transatlantic pivot