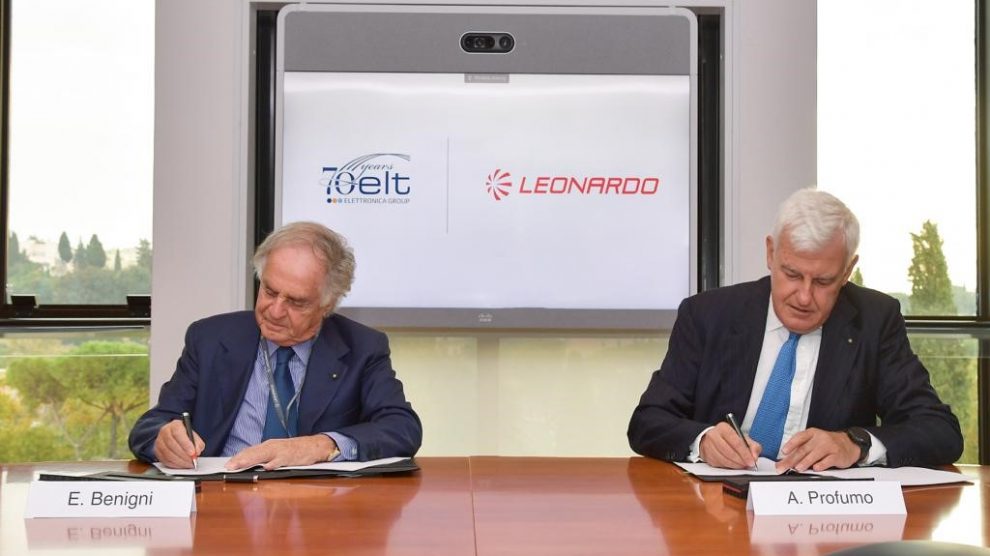 Strategic cooperation to support the growth of sovereign technologies. This is the core content of the agreement signed on Wednesday by Alessandro Profumo, CEO of Leonardo, and Enzo Benigni, President and CEO of Elettronica (31.33% of which is owned by the former company). The focus is on a common strategy to enhance the offer on the national, European and international markets, at a time of great turmoil on all three fronts.

“The agreement will enable a significant improvement to be achieved in the industrial and proactive synergy between the two main players in the domestic Defence & Security sector to provide clients with the best possible solutions,” explained Mr Profumo in a statement.

As for Mr Benigni, he remarked how the deal “confirms the role of Elettronica as national champion of Electronic Defence systems. Moreover, it clearly shows that the wealth of knowledge and the qualified skills of national industry, as main asset of the Italian technological sovereignty, can and shall proceed jointly in order to address the global challenges and support the national efforts towards strategic autonomy.”

For Leonardo, added Mr Profumo, “the signing of the partnership is aimed at consolidating and strengthening Leonardo’s core business, in line with the goals of the long-term strategic plan for sustainable growth Be Tomorrow 2030.”

The plan was presented before the pandemic and is based on three pillars: internal transformation, the drive for innovation (with “Master the new”), and the core business’s strengthening. The latter, for instance, includes the acquisition (announced back in April) of 30% of GEM Elettronica. And indeed, naval and avionics – both fixed and rotary wing – have been identified among the areas of strategic interest.

This perimeter is where a set of “golden rules” has been agreed to share market needs in a scenario-based fashion, in order to jointly address the calls coming from NATO and the EU, as well as national programs. The agreement covers “naval systems, helicopters, manned and unmanned aerial platforms;” Leonardo and Elettronica will thus propose integrated solutions (“Electronics systems and Leonardo platforms/systems”) which exist in the company’s portfolio, or their technological developments, to better meet the customer’s needs.

A special “permanent steering committee” has been set up to govern the agreement to ensure the full achievement of the partnership’s goals. The joint statement explains it’s “composed of the respective top management teams and has the duty of defining the strategic guidelines for the development of the evolutive plans and roadmaps of the collaboration agreement.”

The agreement between the two companies is part of a path that aims to strengthen Italy’s defence capabilities in light of the international context, amidst the several challenges on the horizon and the processes of reflection within NATO and the EU. The latter’s perimeter has been endowed with the EDF fund (endowed with €7.9 billion between now and 2027), which has already launched the first calls for bids; at the industrial level it0s a matter of defining which programs to focus on, which expertises to share at an EU-wide level and which ones to keep within the national perimeter.

The debate was relaunched in August with Italy’s ministerial directive for industrial defence policy, signed by Defence Minister Lorenzo Guerini. Thirty pages, seven lines of development, eight of action and one goal: an integrated “Defence system” at the country’s service, capable of supporting the modernisation of the Armed Forces and preserving the industry’s excellence.

It all starts from the analysis of the international context, which has been complicated by the pandemic and is dominated by discussions on new technologies. The ability to keep up will depend on “Italy’s ability to preserve its strategic autonomy and its role in the international community of technologically advanced countries,” the document reads. The directive calls for a more structured relationship with industry and the world of research.