Home » Charting an international way out of the Tunisian crisis 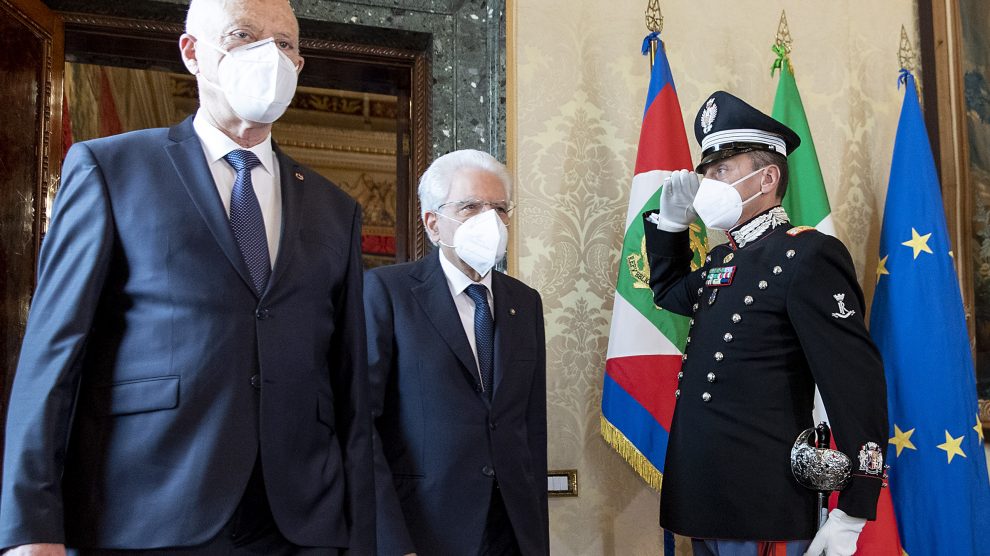 President Saied’s power grab left the country’s political future hanging. Now it’s up to Europe to do the right thing. Dentice (CeSI) and Megerisi (ECFR) read the ins and outs of the ongoing crisis, while Fassino (Foreign Affairs Committee at the Italian Parliament) explores Italy’s role to play

Rome is carefully watching the events in Tunisia unfold. Between Sunday and Monday President Kaies Saied seized on popular protests to take the unprecedented steps of declaring a state of emergency, suspending the nation’s Parliament for 30 days, stripping the MPs of their immunity and sacking Prime Minister Hichem Mechichi. And despite business going on nearly as usual in Tunis, the country’s political future now hangs in the balance.

The head of State assured that these measures are only temporary and cited political impasse and the government’s poor handling of the pandemic as reasons for his actions. Critics in and outside the country are calling his actions a thinly-veiled coup and suspect that the move was intended to cement his grip on power.

The military, who at first defended Parliament, seems to have sided with the president, whose political identity relates to a conservative, Sunni Islam-inspired brand of politics. Police officers ended up storming the local headquarters of Al Jazeera, a Qatari news network deemed close to Ennahda, a political Islamist party inspired to the Muslim Brotherhood.

According to Giuseppe Dentice, head of the MENA Dest at the Centre for International Studies (an Italy-based think tank), there are several paths lying ahead. Some lead to an Egyptian-style authoritarian regime (headed by a president-strongman) or tweaks to the decade-old Tunisian Constitution that would grant the president far-reaching powers. But even if the parties were to resume dialogue after this 30-days break, said Mr Dentice to Decode39, the precedent itself risks undermining the country’s political development.

Meanwhile, pressure has been building up across the geopolitical West to avert any authoritarian backsliding in the only country to come out of the 2011 Arab Spring a democracy. Italy, the EU and the USA have called on Mr Saied – if somewhat softly – to respect the rule of law and ensure the continuity of the democratic process. But among observers is a lingering suspicion that the West could revert to a passive wait-and-see approach.

“Europeans cannot afford to sit and watch from the side-lines as they have done in other moments of tumult in the region,” writes Tarek Megerisi, MENA Senior Policy Fellow at the European Council on Foreign Relations. “A European vacuum will also inevitably lead to other regional powers trying to exploit the situation in Europe’s backyard, as has been most painfully played out in Libya.”

Even before all of this, the expert had pointed out that “ the country is facing an economic crisis born of political failure.” The most recent events are happening atop a decade-long period of stalled democratic reforms and a post-revolution economic progress that never even started, while the EU’s and its member states’ Tunisia policies are in dire need of an overhaul. Both Mr Dentice and Mr Megerisi believe that European inaction contributed to the instability of Tunisia’s infant democracy.

In lending a helping hand, the EU States must “avoid trying to negotiate a comprehensive package” and “opt instead for targeted assistance that can quickly have an impact,” wrote Mr Megerisi. The key, argues the expert, would be to engage via bilateral partnerships and the Union itself to “apply targeted assistance to promote economic diversification,” ultimately “restart[ing] the democratisation process.”

The experts’ stance is broadly shared by Piero Fassino, President of the Foreign Affairs Committee within the Italian Parliament, who stated that the body was “following with great apprehension and concern what is happening in Tunisia.” Rightly so, as not only is the country at risk of an authoritarian drift, it’s also a strategic partner right within Italy’s geopolitical orbit in the Mediterranean.

Investments, cooperation and security matters (including migration and countering Islamic extremism) are all strings that add to the two countries’ geographical proximity. Thus, Italy is well positioned to exert a mediating role, as it does with Libya, where the key parties – as Mr Dentice pointed out – are keen on coming to Rome to dialogue.

“Italy is the country that was most dedicated to assisting Tunisia in recent years, both to help it with the economic crisis and to try to manage the migration issue together,” said Mr Fassino to Decode39. “Evidently, in these hours we are attentive and committed to fielding everything that can help overcome the crisis, promote stabilization and aid the return to constitutional normalcy”.

The Italian MP laid out a three-pronged approach – respect of the Constitution, restoration of Parliament and an all-encompassing national dialogue – by which the country could see itself out of the current crisis. It’s certainly up to the Tunisians to decide the country’s destiny, he continued, but the international community must still provide concrete support in the form of dialogue, economic aid and the rapid delivery of anti-Covid vaccines. As for the EU, he concluded, the time has come to follow up on the Commission’s proposal of a New Mediterranean Agenda.

Emanuele Rossi contributed to this article.