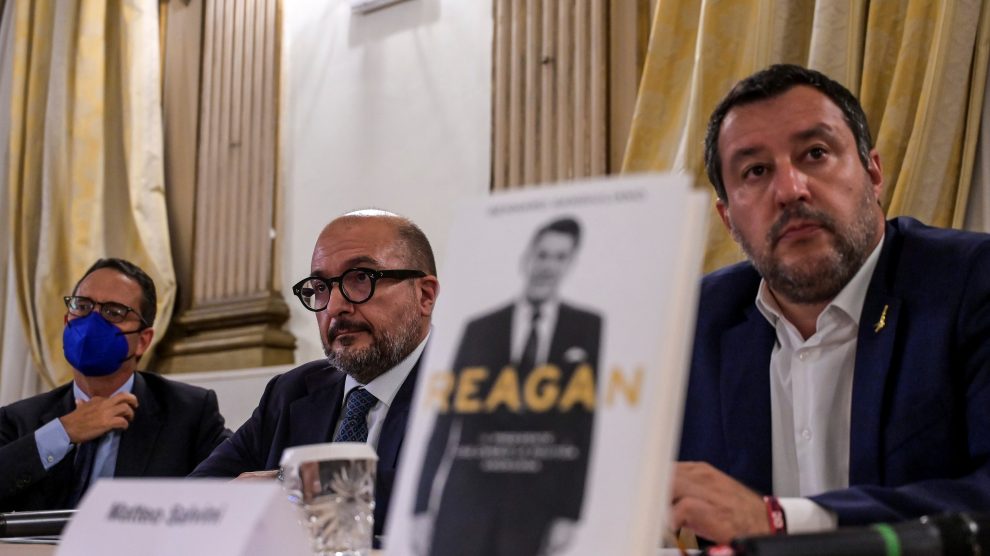 Once a hypernationalist leader and MAGA hat-wearing Trump supporter, the star of the Italian right is embracing Reagan’s liberalism and Biden’s international leadership. As the world around him changes, Mr Salvini aims at becoming the new moderate and conservative reference point in Rome

Something happened to Matteo Salvini, leader of the right-wing League and veritable icon among European populist conservatives, on the way to Mario Draghi‘s government. Once among Donald Trump’s staunchest supporters in Rome, yesterday he admitted that “there are some things in which Joe Biden is better than Trump.”

“The spokespeople for freedom need not retreat within their borders,” said Mr Salvini; “Biden’s return to international leadership is better than the Trump administration’s escape [from it].”

Mr Salvini was speaking at an event to present Reagan. The President that changed American politics, a biography of the 40th US President written by TG2 director Gennaro Sangiuliano. And judging from his remarks, the right-wing leader now seems to be looking up to the famed liberalist.

That’s a far cry from the aggressive brand of nationalism that Mr Salvini, who has publicly worn the MAGA hat and a “Trump 2020” face mask in the past, shared with the former Republican president. However, his shift is in line with the moderate conversion he’s been undergoing to make himself and his party fit for Mr Draghi’s pro-Europe, Antlanticist and reformist government.

The League leader, who’s known for his historical closeness to Russia (which has somewhat cooled off as of late), made clear he looks up to the US, “a reference point for all liberalists and democrats” (intended as supporters of democracy, editor’s note). Yesterday, however, he indicated Mr Reagan as the new model for his party and the wider Italian right, which according to opinion polling encompasses roughly half of voters.

“The State must be as less invasive as possible in private life,” said Mr Salvini, who hopes to be the next prime minister, to a crowd of politicians and journalists. “The flat tax will be the first reform we will offer to our country.” He also advocated for the government, which he belongs to, to step back from imposing excessive Covid-related restrictions, including on the unvaccinated.

The pivot away from hypernationalism and towards a Reagan-flavored conservative brand of politics reflects the profound changes in Italian public perception, brought about by the pandemic and a newfound European solidarity (not to mention the hundreds of billions in aid coming Rome’s way).

In Mr Draghi’s Italy, Mr Salvini is hoping to mold his image into something more moderate, reliable and stately. His attempt to burnish new Atlanticist credentials is also geared at making him a more palatable leader among Italy’s Western allies. Hence, ideologically opening up to Mr Biden’s Democrats – and doing away with the most abrasive, Trumpean traits of hypernationalism – may ultimately pay off after the next general elections, in 2023.