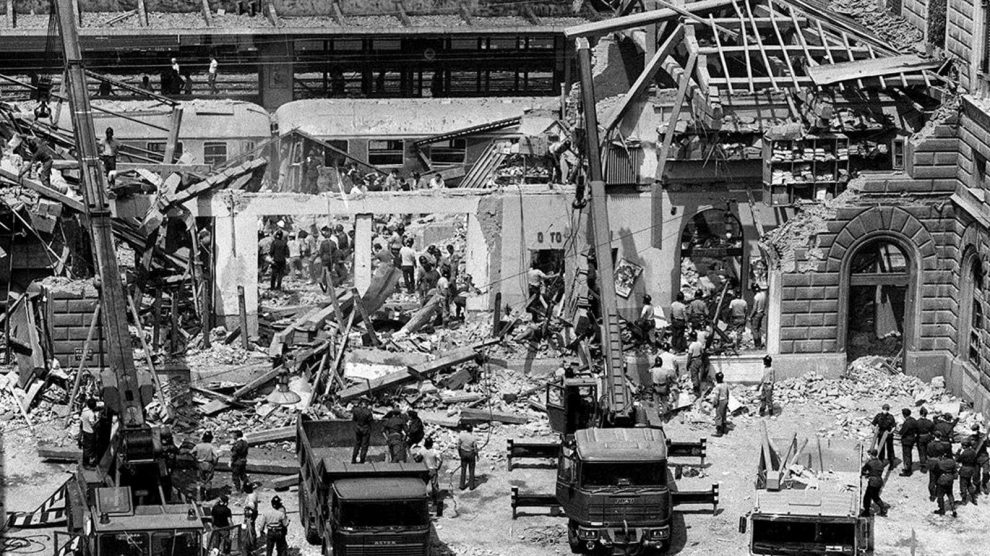 Is there a nexus between a CIA/NATO backed operation, a secretive masonic lodge and a neo-fascist terrorist attack? Or is there more to it? The 1980 Bologna massacre is still an unresolved, subterfuge-ridden issue at the heart of Italy's own Cold War

More than 40 years later, the 1980 massacre in Bologna still lingers on as an unresolved issue, an open wound festering with suspicions relating to one of the darkest periods of postwar Italy. The bomb that took 85 lives detonated during the so-called “Years of Lead”, when bouts of far-left and far-right terrorism were daily occurrences as even senior officials exploited extremisms to impact the country’s political future.

Several members of a neo-fascist group were sentenced and jailed in relation to the bombing, although they always denied any involvement. Still, grey areas and substantial gaps remain around the massacre’s connection to wider national and international operations, the involvement of secret services, shadowy masonic lodges and the overall “strategy of tension” that gripped the nation in those years.

On August 2, exactly 41 years since the massacre, the office of Prime Minister Mario Draghi announced his decision to declassify a trove of documents inherent to the P2 masonic lodge and Operation Gladio. According to several historians and commentators, these documents could shed a new light on the bombing. “The initiative may prove useful to the reconstruction of the dramatic events that have characterised the recent history of our country,” read the communiqué.

An ongoing trial in Bologna is still exploring whether Licio Gelli, wartime fascist and leader of P2, had ultimately ordered the bombing. And some researchers believe in a nexus between P2, whose affiliates included hundreds of high-profile citizens and state officials, and Operation Gladio, a part of the broader Stay Behind operation backed by the CIA and NATO and linked to the intelligence agencies of several Western European countries.

The latter was officially a contingency measure, consisting in disturbing actions to prevent Italy swerving too far left and under Russia’s influence, but there are those who believe that neo-fascist extremists were employed and armed thanks to Gladio. Nonetheless, hardly anything of use will emerge from the declassified paper (that is, if they ever get across the fabled Italian bureaucracy and become publicly available in the state’s archive); data identifying “institutional operators” will not be released, and other NATO countries are not bound to Mr Draghi’s declassification directive.

Mario Caligiuri, president of the Italian Intelligence Society, made a point of reminding that previous judicial rulings stated that P2 was not, in fact, a subversive organisation, and that Gladio was a legitimate operation under Italy’s international accords. The expert acknowledged that a “more serene evaluation” of the workings of the secret services can derive from studying those papers, while also highlighting that those papers must be compared with their foreign counterparts to reveal the full picture.

Meanwhile, there are those who wish an alternative version of events to be fully investigated. MP Federico Mollicone, from the right-wing Brothers of Italy party, is battling to institute a parliamentary committee of inquiry to examine the so-called lodo Moro, i.e. a pact that five times PM Aldo Moro (who died at the hands of far-left extremists) supposedly struck with the Palestine Liberation Organization (PLO) to allow extremist and weaponry to travel through Italy in exchange for protection from terror attacks. This would add a further dimension to the typical East/West, left-v-right Cold War narrative behind the Years of Lead. The Bologna massacre, for instance, would be ascribable to an unidentified suspect and an accidental detonation.

The debate is far from over. Some forty years ago, these events provoked systemic changes: the revelation of the existence of P2 caused the collapse of Arnaldo Forlani’s government and the emergence of the first non-Christian-democratic executive, led by Giovanni Spadolini (1981). The explosive members list that emerged, as judges have ascertained, was (and still is) incomplete.

Licio Gelli, head of P2, was sentenced in 1995 for “subversive association” and his role in misleading the investigations into the Bologna massacre. He died in 2015. In 2020, he was identified by the city’s public prosecutors as one of the four main instigators of the terrorist attack. And yet, there still seems to be some empty spaces between the dots. Here’s to hoping that the declassified document trove may help assuage the quest of those, such as the victim’s families, who are still seeking the whole truth.

Detention camps, migrants and protests: Lukashenko in the limelight
Libya, the (economic) road through Rome