Home » Glance to France: the (electoral) perils of courting the anti-vaxxers 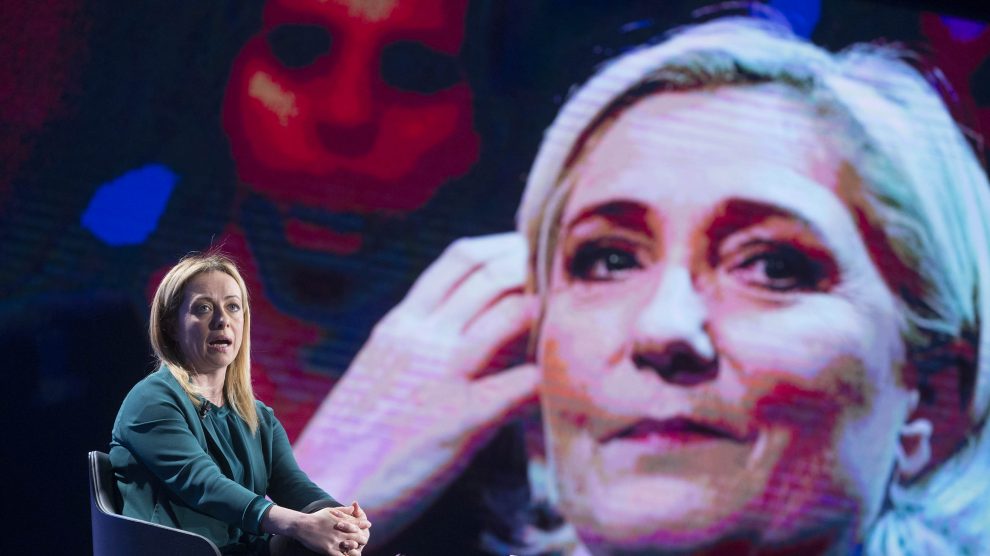 Today Giorgia Meloni, leader of Brothers of Italy, is the Italian right’s rising star. She is reaping the benefits of her party being the only opposition force, and her contrarian stance resonates with disillusioned voters; so much so that she has risen from single digits to over 20% in polls, levitating near the very top of the charts and endangering the years-long primacy of her ally and rival, Matteo Salvini.

In the past weeks Ms Meloni has been among the most vocal critics of the adoption of the European digital certificate to restrict certain at-risk activities and places to the immunised only. She railed against what she called an “Orwellian”, discriminatory measure, despite having been jabbed and having voiced support for the measure back in March. Her current strategy, however, might backfire.

In France, the vaccination controversy has cut through the nationalist right like butter. Marine Le Pen, the leader of the National Front that just emerged from a disappointing electoral round, has elected to keep away from the anti-Covid pass protests and even further from the anti-vax-packed squares.

This is the latest episode of the dédiabolisation (“de-demonisation”) process of a Lepenian right in search of legitimacy. Four years ago it failed to conquer the presidential palace, the Elysée. Today, less than a year until the next presidential elections – despite the June regional elections setback, where she was overshadowed by the Gaullist right – Marine wants to try again.

The first step of her strategy is to recover ground towards the center while ignoring the populist and antivax protests that have been besieging President Emmanuel Macron for the past two months. Protesters are now engaged in an unprecedented understanding with the gilet jaunes, who are back in great shape.

Riding the protesting wave is Ms Le Pen’s former right-hand man, Florian Philippot, who fled the party in 2017 and is now the undisputed helmsman of the no-pass movement, calling for the “boycott of venues” who will require the certificate and threatening to surround siege the Elysée.

Ms Le Pen’s reasoning is simple: to side with the protests means locking steps with the consensus of that 10-15% who do not want any kind of restriction. But in an electoral system centered on the run-off ballots round, this would entail suffering the umpteenth defeat at the hands of the “Republican” majority, who instead welcomed the Macronian take on the green certificate.

It is too early to say whether Ms Le Pen’s moderate strategy will help her to overcome the debilitated outgoing president, whose polling for next year looks rather anemic. Of course, the experiment is worthy of attention for the Italian right, which is aiming for the same goal.

If even Mr Salvini swallowed the green certificate, albeit with more than one episodes of stomach ache within his party, Ms Meloni finds herself having to play two games at the same time. On the one hand, what is appropriate for the only opposition party, that is, to go against the government and ride out dissent. On the other hand is the longest game, the one that is already looking at the 2023 general elections and needs a larger team.

“Le Pen and Meloni share a similar fear. Both want to lead the protest, but without damaging their most important constituency: the party of authority – armed forces, police forces, anyone who oversees public order,” argues professor Jean Pierre Darnis, scientific advisor at the Italian Institute of International Affairs (IAI) and teacher at the University of Nice. “Meloni, however, is more inclined to ride the protest wave because she is the only opposition leader.”

After all, the green pass is no less than “an act of order, of authority. Macron’s choice was well received by a part of the French right as well as the left. Philippot can afford to praise the popular revolution, peppering in neo-fascist references when he speaks of an anti-elitist revolution, because he has little to lose. Numbers in hand, he remains a very marginal figure in French politics.”

Ms Le Pen, like Ms Meloni, has a lot to lose. Even more than Macron, whom according to polls is not too far off, the leader of the National Front fears the “classic” centre-right led by Xavier Bertrand, former minister under Presidents Chirac and Sarkozy. Here the comparison with Italy becomes harder because, unlike the colorful camp of the French right, there is no openly moderate and centrist Italian party that’s capable of garnering so much support.

Nevertheless, the stakes remain very high. Because there is no clear reference point for Italian moderate voters, the centre is tempting to Brothers of Italy, a party that’s demanding the leadership of the center-right.

Hence, courting the no-pass protests and the most extreme faction of the anti-vax squares is twice as risky. All the more so because, just like in France, these are crowded and cross-party squares, where the extremes meet like tributaries of a single river, so that you have the extremist right and the anti-system left meshed together.

“The coagulation of these two opposite forces within the same protest is now a de facto reality in France,” says Mr Darnis; “whoever tried to convert it into an advantage in the elections would be disappointed. If someone else is mulling whether to follow that path up to Italy’s 2021 mayoral and 2023 general elections, they cannot say that they had not been warned.”

Kabul has fallen. What’s next for Afghanistan?
As Italy rebounds, will Draghi stay or go?