Home » As Italy rebounds, will Draghi stay or go? 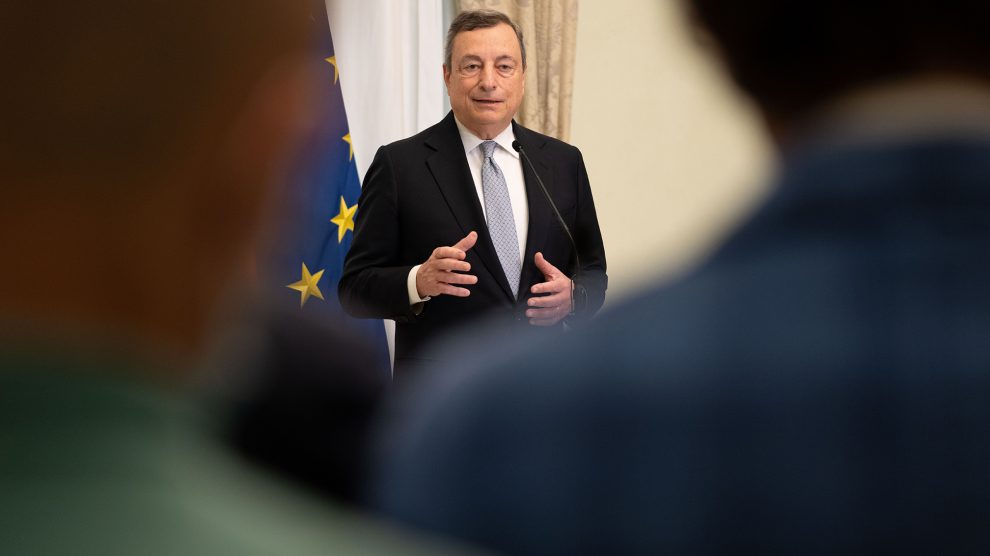 The PM is overseeing a historical rebirth process, but party politics and the next presidential election could soon see him off... Or could they?

Italy is having its moment in the sun. Music and sport results aside, the country’s strong economic rebound (+6% projected for 2021, well above the European average) is being widely credited to the current Prime Minister and former European Central Bank chief, Mario Draghi, who was recently showered with praise by the likes of the Financial Times and Bloomberg.

Mr Draghi was sworn in in February with two tasks: getting vaccines in people’s arms (which he did, with over 60% immunised Italians within six months) and readying Italy to receive over €200 billions out of the European NGEU funds by presenting Brussels with a viable recovery plan and pushing forward a tight schedule of structural reforms. That, too, is well underway.

Mr Draghi’s success (and his support level in Italy, solidly above 70%) is also reflecting on the country’s international standing, as commentators dare to believe that he can lift “Europe’s sick man” out of its longstanding political and economical limbo. “As France and Germany head into uncertain political times, Italy looks like a pole of stability within the EU” tweeted the FT’s chief foreign affairs commentator, Gideon Rachman.

Today, the lingering question is how long Mr Draghi intends to keep the country’s reins to oversee the (long overdue) overhauling process he’s kickstarted. Italy just entered the “white semester”, the final six months of President Sergio Mattarella’s term during which Parliament cannot be dissolved. After that, the future of Mr Draghi’s wide governing coalition is clouded in uncertainty, though several paths are emerging from the mist.

The current and widely popular Head of State already signalled he’s not interested in a second term (although he could not have said otherwise, as it is the Parliament’s role to name and vote a successor), and many have already identified Mr Draghi as a perfect candidate. Naturally, the parties pushing for the current PM’s “promotion” are also those who believe they can benefit from going back to the polls before this legislature officially ends in spring 2023.

So, if Mr Draghi does get the top job, some members of the current coalition would probably push for snap elections. Until now, party leaders have been sidestepping the issue and generally avoiding to provide definite answers as to the post-white semester era. Nobody can really foresee the amount of popular support they’d be able to command because of the shifting power scales characterising this politically volatile moment. And every party has its own agenda to push forward. There is, however, enough data to attempt a speculation.

Let’s start from the right. Giorgia Meloni’s Brothers of Italy is the only party out of the governing coalition (though it partners up with Matteo Salvini’s League and Silvio Berlusconi’s Forza Italia in an alliance that virtually encompasses all of Italy’s right-wing forces). Ms Meloni would certainly gain from an election due to her skyrocketing popularity which propelled her from dingle digits to similar polling numbers to those of Mr Salvini, i.e. roughly 20% of prospective voters.

The League’s leader – who also heads the centre-right’s coalition by virtue of those very numbers – is certainly wary of losing its sceptre to the up-and-coming ally. There has been speculation regarding his party’s absorption of Forza Italia, a dwindling force that’s largely based on its leader and is unlikely to remain politically relevant in case of elections. Besides, Mr Berlusconi – who dreams of reuniting the entire right to form a US Republican-style party – would most likely give in in exchange for his allies making him the next President.

Thus, Mr Salvini is probably happy to bide his time and reap the benefits of his party’s pivot to moderation, which came about when he decided to enter Mr Draghi’s government and which is also often contradicted by his fear of his harder electors flocking to Brothers of Italy. His final aim is to remain the rightwing coalition’s most popular leader, and thus (perhaps) the next PM. Still, his electorally-driven U-turns make it hard to flesh out a straightforward strategy for his League.

Moving on towards the left – and overlooking the constellation of small parties populating the centre -, Enrico Letta’s Democratic Party, which polling-wise hovers just below the League, has its own list of names for the highest office. Some would be perfectly content to let Mr Mattarella’s mandate decay and attempt to elect someone else, while Mr Draghi sticks to his current seat.

On to the more unstable variable of their erratic allies, the Five Star Movement, which dropped below 15% (and lost plenty of MPs) after heights of above 30% in the last elections. Former PM Giuseppe Conte was recently confirmed as the party’s new leader and he’s reforming it, though he does not have it easy with the hardliners and nostalgics (who would happily see Mr Draghi’s government tumble). Their drop in popularity – and the reform they themselves passed last year, which will significantly cut the overall number of MPs in the next Parliament formation – also means that many would rather keep their jobs until 2023.

As it turns out, today’s status quo might be what appeals to most. It’s also the most likely scenario according to Fabio Martini, an expert political journalist from La Stampa, who believes that “those [MPs] who [will] vote by secret ballot for the Head of State very strongly want the legislature not to be interrupted, and therefore will do everything to ensure that [Mr Mattarella and Mr Draghi] remain where they are.”

From what transpires, it’s obvious Mr Draghi would rather remain PM until 2023 to keep his operation running smoothly (though he’d also quite obviously be content with becoming Italy’s President as his “second choice”). Mr Martini also maintains that Mr Mattarella can be convinced to retain his post for the sake of the country’s stability. He indicated Mr Draghi becoming President as the second most likely scenario. A third hypothesis is “absolutely the lesser, but undeniably possible – it will depend on the parties and their little yet legitimate calculations.”

Glance to France: the (electoral) perils of courting the anti-vaxxers
Iraq carves out pivotal role in new Middle Eastern trio