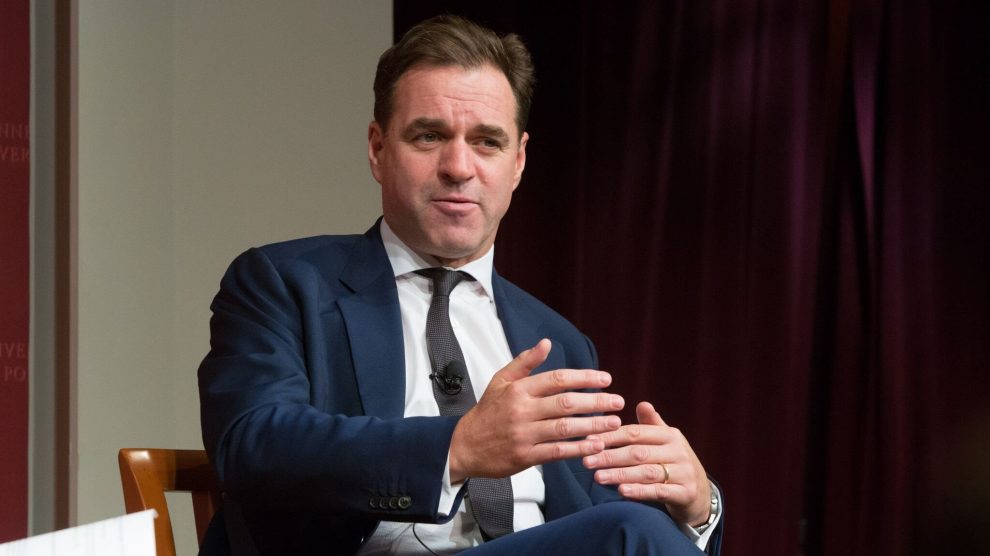 “We are in a Second Cold War. And Afghanistan has little to do with it.” When we ask Niall Ferguson if the withdrawal will put an end to American hegemony, he replies, half-jokingly, that “Kabul is Joe Biden‘s last problem.”

A Stanford University historian and Senior Fellow at the Hoover Institution, as well as leading figure of British conservative thought, Mr Ferguson is travelling through Europe to present his latest book, Doom. The politics of catastrophe (by Allen Lane).

Will the United States get up again?

Yes, they have extensive military capabilities. We have seen them abandon Vietnam and rise to their feet in the Cold War with Russia.

A temporary blow. Afghanistan is not a crucial battleground in what I call the Second Cold War between the US and China. What is happening in Taiwan matters much more. Anyone who believes that the abandonment of Afghanistan clears the way for the Chinese aims on that island is sorely mistaken.

Is the US’ progressive withdrawal from Central Asia a way to increase its forces in the Pacific region?

I don’t see a direct correlation. In the last year the US engagement in Afghanistan was very limited, [former US President Donald] Trump had already brought the amount of forces on the ground to a minimum. Nor were we burning up as many resources as ten years ago.

So the farewell to Kabul says nothing about the next moves in Taiwan, Japan or Korea?

These are very different operations. Taiwan needs air and naval protection, the mission in Afghanistan had morphed into training and operational support for the Afghan army.

How does Europe come out of it?

I find it unfair, but all in all unsurprising, that European politicians are piling criticism on the US for their mistakes in handling the withdrawal. It was a NATO mission. And they are at least as responsible as the Americans for its failure.

Is all criticism unfair?

It’s fair to hold that [US President Joe] Biden turned the withdrawal from Kabul into a disaster. But this war had been going on for twenty years. Some allies, such as the French, had already withdrawn their troops. Nor has anyone from Europe come forward with a viable alternative, except to point the finger at Washington with a healthy dose of hypocrisy.

Now there are talks of European defence again.

[At the international economic conference] in Cernobbio I even heard French minister Bruno Le Maire speak of a “military superpower” and “strategic autonomy” in Europe. I barely held back the laughter.

There isn’t the slightest chance that the EU will find the necessary resources to create a strategy that’s autonomous from the United States. This alleged European army already shares many traits with the formidable Afghan army: it would collapse at the first aggression, perhaps at the hands of Russia. European governments talk a lot but spend little on defence. The idea of ​​breaking free from NATO to spite [Mr] Biden is simply a joke.

Let’s go back to Afghanistan. Who will fill the void?

Not necessarily a foreign power. For a long period of its history, Afghanistan has been in the hands of the Afghans, with all of their limitations. The Taliban will fill the void. They won’t be able to control the country alone, they will ask for a helping hand.

They are very tempted by Chinese money, and indeed promise excellent relationships. Beijing can offer only one thing: the Silk Road. It will send a delegation to tell them “here’s the money. Will you give us your natural resources now?” That’s working well in Africa.

Will their relationship be based solely on business?

If I were [Chinese President] Xi Jinping, the last thing I’d want would be to bog down China in Afghanistan by deploying men on the ground. They will give support to the authorities in Kabul, regardless of the Taliban’s stance on human rights. I doubt that China would be shocked by Sharia law, closed schools or women under house arrest.

Circling back to Biden, does the chaos in Kabul jeopardise its presidency?

We need to frame this phase with a wide-angle lens. Despite some instances of cheerleading journalism that insists on comparing [Mr] Biden to [previous US Presidents] Roosevelt or Johnson, this presidency has a long list of internal problems. Starting with the slim Democratic majority in the Senate. If anything, it looks like the Carter administration.

What do they have in common?

[Former President] Carter made foreign policy mistakes, from the fall of Saigon to supporting the Iranian revolution and the Soviet invasion of Afghanistan, but fell out of the Americans’ favour because of inflation. Anaemic growth, skyrocketing prices, the Delta variant, the migrant crisis at the Southern border: Biden’s problems don’t reside only in Kabul.

I’m not sure if [Mr] Trump is about to return, nor if he wants to. He has money and great popularity within the Republican base, but he also has new internal contenders. The same goes for [Mr] Biden and the unpopular [Vice President] Kamala Harris, whom the Democrats will try to replace.

We’re nearing the twentieth anniversary of 9/11. How did American foreign policy change that morning?

Drastically. If I look back twenty years, I realise that I had aced two predictions. The first: that the US would have overreacted in responding to the terrorist attacks. Unlike the Italians and Germans, they weren’t ready for an internal terrorist threat. Nor were they ready to realise that their new imperialistic, post-Cold War moment had very fragile foundations.

Would you have imagined twenty years in Kabul?

No, I wouldn’t have imagined more than ten. But I think it’s an exaggeration to describe twenty years in Afghanistan as the defining event of this century. Twenty years ago, among the general indifference, two far more important things happened.

The rise of China, which has proved a way more serious trouble than Islamic terrorism. And the commercial revolution of the internet, which gave the US rule over the digital market. These two events shaped the world as we know it much more than Al-Qaeda.