Home » The impact of the Baghdad Conference on the wider Mediterranean 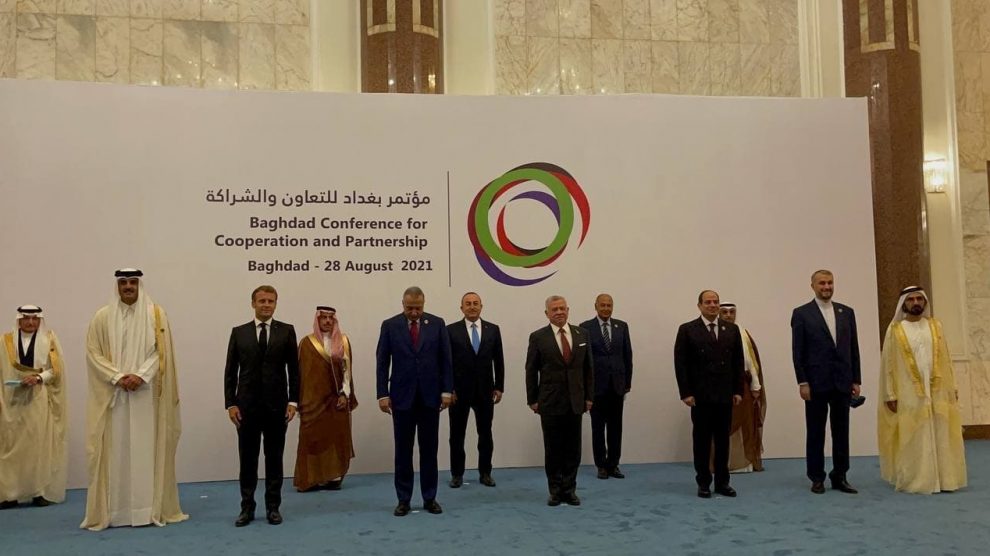 The summit in Baghdad tells the story of a balance-seeking wider Mediterranean. A primary interest for the EU, Italy and France

Iraq continues to vie for the role of contact point between the several Middle Eastern heterogeneities. Prime Minister Mustafa al Khadimi and President Barhem Saleh are bent on giving that role to the country and reaping the diplomatic dividends of the international conference they organized in Baghdad.

The meeting consisted in days of meetings and dialogue between the region’s various realities. The Gulf with its diversity, President Ebrahim Raisi’s old/new Islamic Republic, Turkey. Countries and dossiers that play primary roles in the wider Mediterranean, all of strategic interest for Italy.

In the first months of 2022 Rome will become a key player in Iraq by taking command of the NATO mission in the country. The effort will focus on protecting the security framework, moving amid the area’s (precarious) balances and striving to reach beyond security to the political, social, economic and geopolitical context.

Sheikh Mohammed bin Rashid al-Maktoum, Vice President of the United Arab Emirates and Governor of Dubai, said he met with Iranian Foreign Minister Hossein Amirabdollahian on Saturday, on the sidelines of the summit.

In recent years the Emirates and Iran have been carrying out rather informal contacts, amid the regional clash that resulted in sabotages along the Strait of Hormuz (where Italy participates in the “Emasoh” security mission this year) and in hybrid wars for power of attorney in some parts of the area.

Something could come of this pragmatic management of stability, which became necessary because of the pandemic’s harmful impacts as well as the knock-on effect produced by Joe Biden’s arrival in the White House.

The Democrat is demonstrating how the Mediterranean-Gulf-Horn of Africa region, according to Washington, must be subjected to a general balancing, managed by the invested actors. This is where Mr Khadimi is trying to build a mediating role, between the complex Sunni and Shiite worlds centered on Iran and its regional projections.

Iraq can boast experience, interest and involvement in these matters. The country is suspended between Shiite, Sunni Arabs and Kurds, as well as influences from Iran, Gulf countries and the United States.

Mr Khadimi intends to exploit this condition as an advantage in the intra-regional flow of – or at least, attempts at – dialogue. This in turn impacts the wider Middle Eastern area, as demonstrated by the evolution of crises such as those in Libya or Ethiopia, or even the Taliban rule of Afghanistan.

Mr Khadimi’s effort towards regional cooperation and partnership – which Baghdad also understands as a direct interest, because it would gain from such stability – is sponsored by external actors such as the United States and France.

French President Emmanuel Macron, the only Western head of state among the leaders at the summit, assured diplomatic support to Iraq. He finds the Iraqi initiative to be a further aid to his objective of modelling France into an alternative power to the Sino-American dualism within the wider Mediterranean.

Today, Paris is playing a dialoguing role in the attempts to rebuild the nuclear agreement with Iran. But during the years the latter was being built, France was the most skeptical among the members of the “5+1” negotiating system, as it had to act as guarantor of Emirati and Saudi interests. Now, however, it is looking to balance the dossier to bring Riyadh and Tehran to dialogue.

There’s momentum. The Iranian Amirabdollahian had met with the head of Saudi diplomacy, Faisal bin Farhan, before meeting with the UAE’s VP. The latter, a unique event, was attended remotely by the King of Jordan, Abdallah II, the Emir of Qatar Tamīm bin Ḥamad Āl Thānī, the Egyptian General/President Abdel Fattah al Sisi, the heads of the Emirati and Kuwaiti governments and the foreign ministers of Saudi Arabia, Iran and Turkey.