Home » Is Italy risking its own Capitol Hill moment? 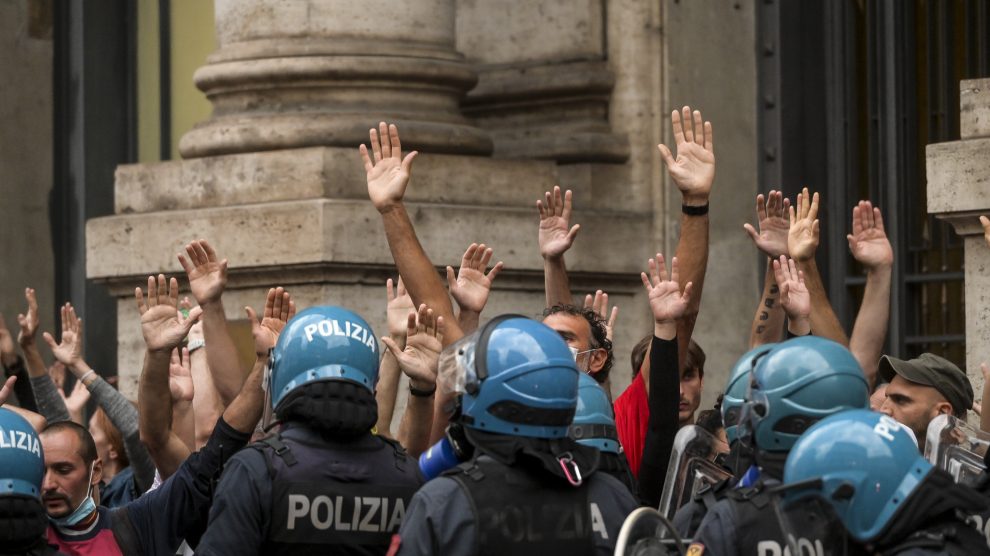 Tension mounting around the country’s world-leading sanitary measures has already proven fertile ground for right-wing extremism to flourish, and European hard-right forces could be lending a hand. With the G20 final summit looming, police step up their efforts

Italy is sailing in uncharted, and potentially turbulent, waters. The country is about to adopt the world’s strictest Covid-related mandate, adding heat to a boiling pot of public anger and resentment towards the institutions. And this is proving a fertile ground for right-wing extremism along with eversive acts.

Starting Friday, October 15, all workers will be required to present the so-called green pass, which proves either one’s vaccination, recovery in the past six months, or a negative Covid-19 test from the past 48 hours. Those who fail to comply risk suspension without pay, but cannot be fired.

As of Thursday, more than 80% of over-12 Italians are fully vaccinated and 85% have received one shot. Nonetheless, the slimming minority that rejects the vaccine feels rather strongly about the limitations that come with these new rules. Sit-ins and protests are expected to occur across the country and in all cities as soon as the measures come into force and in the weeks after.

Some fear that last Saturday’s protest in Rome might have been a trailer of what’s to come. What began as yet another anti-green pass peaceful manifestation turned violent when some were repelled with tear gas and water cannons before they could reach Prime Minister Mario Draghi’s office, then went on to storm the headquarters of Italy’s biggest labour union, CGIL.

Police were caught off-guard by those protestors who breached the agreed-upon course. 38 members of the police were injured and twelve protestors were arrested later in the night, including neo-fascist and extreme right-wing leaders – namely Roberto Fiore, Giuliano Castellino, Luigi Aronica – as eversive actors exploited the anti-green pass sentiment to incite violence.

When she convened with the heads of police and secret services on Wednesday, Interior Minister Luciana Lamorgese had to acknowledge that the situation had been underestimated. Long criticised by the opposition for her handling of public safety, she has yet again come under intense fire and will testify before Parliament’s security watchdog, COPASIR.

Still, there’s more to it – on Thursday members of COPASIR audited Mario Parente, head of Italy’s internal secret services, who believe protesters were originally aiming at the PM’s office and ended up storming CGIL’s HQ only because they weren’t able to make it.

There’s more: officials are fleshing out the suspect that Saturday’s right-wing violence was the expression of a wider, pan-European coordinated effort to piggyback on vaccine scepticism (and/or aversion to the green pass and the like) to advance their own goals.

Two weeks prior, members of several hard-right parties convened in Belgrade for a conference. Mr Fiore was there in his capacity as President of the “Alliance for Peace and Freedom” which reunites Europe’s extreme-right forces, hailing from France, Germany, Greece, Italy and Spain, as well as Serbia and Russia.

One key outcome is stated on the Alliance’s website: “The need to give life throughout Europe to a movement of opposition against the diktats of the sanitary tyranny that in Italy and France try to destroy the dignity and health of peoples.”

On Tuesday Mr Draghi confirmed that the government and the judiciary were evaluating disbanding Forza Nuova (FN), the neo-fascist extraparliamentary party led by Mr Fiore. FN’s website has been confiscated, but the movement and its leaders remain unapologetic – even from jail – and the risk of foreign coordination, and the exploitation of public anger, remains.

Opposing the green pass in the name of freedom “is just a pretext to take to the streets, civil liberties are not involved. And the medium to long-term effects of the crisis are yet to come,” warned Arije Antinori, professor of Criminology and Sociology of Deviance at the Sapienza University in Rome.

Mr Antinori also pointed out that Russian social network VKontakte is an “ideal terrain where to bounce this kind of [anti-green pass] dissent.” Meanwhile, the various regional versions of Kremlin-sponsored outlets – such as Sputnik Italia – are all too happy to fan the flames of public malcontent with carefully tailored news stories.

Meanwhile, Ms Lamorgese released safety guidelines to secure the country in the upcoming “demanding period.” The new measures include reinforcing pre-emptive actions and tightening the surveillance of “sensible objectives,” as well as banning non-static protests and keeping them distant from sensible places.

Additionally, at least 500 more soldiers will be deployed to reinforce the military’s patrolling initiatives, especially in big cities. The government has its eyes set on when the G20 final summit will be underway in Rome, on October 30 and 31, and seems bent on preventing public disorder. Still, issues are likely to arise more organically from the very fabric of society.

2.5 million workers are not vaccinated, including 300,000 public workers and 60.000 law enforcement and security forces. Tensions are running especially high in some critical sectors where vaccination scepticism is rife. Il Sole 24 Ore estimated that roughly 50% of private care practitioners, 40% of seaport workers and 30% of lorry drivers have not been jabbed.

Workers in the major commercial port of Trieste have already announced they’ll be striking “until the green pass [mandate] is removed,” said their spokesperson to Repubblica. He added that “almost all ports will stop [operations],” although that will hardly be the case, judging from multiple reports.

The Italian government is holding the line, going as far as resisting intra-majority calls to offer free Covid tests to those who do not wish to get vaccinated. Nonetheless, it knows that this world-leading effort might have unintended consequences. The coming days will offer a clearer picture of the effect of these new measures.