Home » Caught between home and the G20: Biden’s European trip 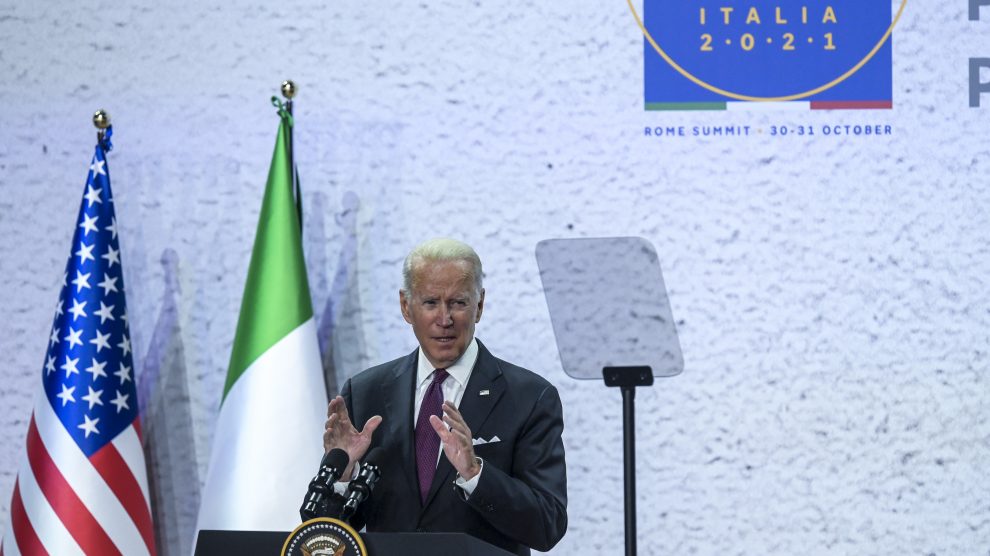 The new US foreign policy is built on an unfinished economic transformation at home, but it promoted progress on Transatlantic ties and climate. An all-encompassing, post-G20 analysis by Brian Katulis, Senior Fellow at the Center for American Progress

The global spotlight shifts from Rome to Glasgow this week following the latest G20 summit held in Italy’s capital, with climate change becoming the top global focus during the next few weeks at the international conference in Scotland.

US President Joe Biden had a busy three days in Rome, where his administration took some steps to give more form to its emerging foreign policy, one that has faced setbacks this summer and early fall with a bungled military withdrawal from Afghanistan and mismanaged announcement of a new security pact with Australia and Great Britain, a move that Mr Biden described as “clumsy” in a meeting with French President Emmanuel Macron.

While the first leg of Mr Biden’s second foreign trip as president focused on some traditional national security concerns including Iran and Turkey – and also underscored some of the chronic international challenges of the Covid-19 crisis -, the main headlines from the Rome portion of the trip featured the centrality of economics in his foreign policy agenda.

Bridging home and the world

The Biden administration is trying to deliver on a promise to transform the US’ global economic approach and integrate it with its ambitious efforts to shift its economic model at home. But one key challenge Mr Biden faces in advancing this new foreign policy approach, which has a markedly different style of economic statecraft, is found at home.

Mr Biden showed up in Europe empty-handed and without the final approval from Congress for key items in his domestic reform agenda to increase public investments in infrastructure and the social safety net. This goes to show just how complicated is the shift his team is trying to make, i.e. changing US foreign policy in a way that aligns with his vision for a new domestic economic model.

The divisions at home derive from both the Republican Party and some splits within his own Democratic Party. The American president didn’t let them impact his global economic agenda, but the long-term viability of these international steps depends on the US producing some results on the domestic front, especially on climate investment commitments.

One important move on this global economic front was a deal to roll back tariffs on European steel and aluminum, an important step to reduce transatlantic trade tensions that had escalated during the Trump administration. Mr Biden’s team touted the move as a step that will help reduce costs at a time of concerns about inflation and logjams in global supply chains.

The move is also important for what it signals about Mr Biden’s geopolitical approach on economic issues and how it stands in contrast to how former US President Donald Trump approached these issues with European partners.

During his four years in office, Mr Trump’s “economic nationalist” approach sought to achieve leverage with unpredictable and at times erratic moves on the economic front with close partners in Europe, but this ended up reducing strategic trust and causing more doubts to seep into transatlantic relations.

Mr Biden’s template has sought to rebuild cooperation with trading partners in Europe and Asia on a range of economic fronts with a stronger emphasis on those democratic countries who may share some concerns about China’s assertive economic model.

As the global economy continues to recover from the Covid-19 crisis, the Biden administration has sought to build a stronger degree of cooperation between countries in the three main engines of the global economy – America, Europe, and Asia – and do so in a way that recognizes that other countries will likely hedge their economic relations between the US and China.

What Mr Biden is trying to do with his global economic approach may have been best captured in this Center for American Progress report from earlier this year, A More Perfect Union:

“Moving forward, the United States needs to redefine economic statecraft in ways that facilitate national development at home and strengthen ties with fellow liberal democratic allies abroad. The core goal of U.S. economic statecraft should be to build a shared industrial and innovation ecosystem that spans both the Atlantic and Pacific oceans, incorporating America’s most important allies in Europe and the Asia-Pacific. This economic concert of power would bind America and its closest partners together in a shared project to compete effectively with China, promote the collective prosperity of its member nations, and show that democracy can deliver on its economic promises…”

Climate, the global tax and the home front

In addition to the steel and aluminum tariffs deal, which Mr Biden and his European partners say will help address climate change by creating disadvantages to “dirty steel” production of the sort that comes out of China, the first leg of his Europe trip also saw the G20 announce an agreement for a global corporate minimum tax of 15% in an effort to level the international playing field and prevent multinational corporations from rerouting their profits towards lower tax jurisdictions.

The devil is in the details in implementation – many of the countries, including the States, need to get other parts of their governments to approve measures to make this a reality. But the deal represents a proactive attempt by the Biden administration to work with the world’s other major economies to reset the balance that had shifted in favor of the global private sector for decades (during the waves of globalization and privatization of the 1980s into the early 2000s) and garner more resources for public investments and government spending needed to address urgent challenges, including the Covid-19 pandemic and climate change.

As the global spotlight shifts to the COP26 summit, expectations for major steps forward in the struggle to address climate change are low. Divisions between countries about who will bear the financial burden for the transformation needed, political gridlock within countries on various climate measures, recent run-ups in energy prices, and the global supply chain challenges have all complicated the prospects for success at this particular summit.

However, that’s why steps that could lead to better economic and climate policy coordination between the US and Europe as witnessed in the agreement to end the simmering transatlantic trade war are important. They could help shift the overall international environment in ways that help the US and its close partners to reshape the global economic system in ways that are mutually beneficial and also support a transition a green economy.

US Trade Representative Katherine Tai explained that the US and Europe not only took a step back from the tariff wars on steel and aluminum, but they also agreed to suspend World Trade Organization disputes against each other related to 232 actions.

Furthermore, she explained how US-EU discussions are significant for fighting climate change, stating that “President Biden has been clear that we must find new ways to tackle the growing crisis and create jobs. As part of the resolution, the US and the EU have agreed to negotiate the first-ever carbon-based arrangement on steel and aluminum trade, and create greater incentives for reducing carbon intensity across modes of production of steel and aluminum produced by American and European companies.”

Ms Tai underscored the importance of this deal, arguing, “that is why we will create a global arrangement to encourage like-minded economies that share our collective commitment to market-based principles and addressing the carbon intensity of these industries.” So, no matter what happens in the next few weeks in Glasgow, the Biden administration is looking for practical ways to produce progress in cooperation with close partners in Europe and around the world.

Ultimately, however, the Biden administration’s ambitious agenda to transform the global economic statecraft component of US foreign policy heavily depends on what it can get done on the domestic front. Here in America, the political landscape is fraught with dysfunction and division, with Mr Biden’s proposals to invest in infrastructure and rebuilding the country’s social safety net in a way that helps America’s workers and companies still hanging in the balance.

Countries around the world, including in Europe, have become quite accustomed to seeing the political pendulum swinging from Republicans to Democrats and back again at a dizzying pace.  All of these political shifts inside the States come with major implications for its foreign policy and how it approaches global economic issues, as we are all witnessing in the shift from Mr Trump to Mr Biden.

The sharp divides between the two parties and within both camps have raised new questions about the US’ strategic steadiness and reliability in recent years – with deep concerns about the fragility of America’s political system. The next time the political pendulum swings, will it remain attached?