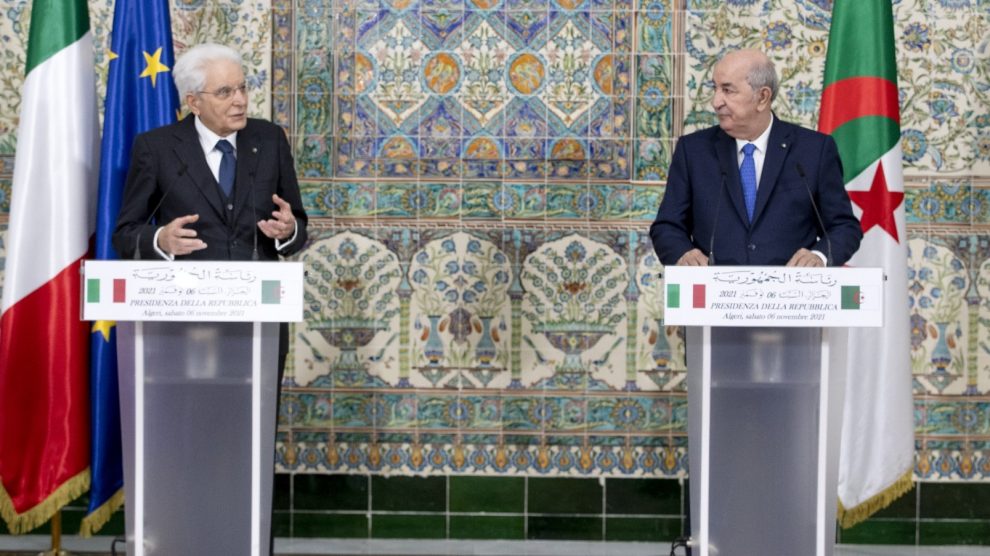 The Italian President and Foreign Minister were welcomed by the Algerian heads of State and discussed relations, migration routes, business and energy. Alongside them was Eni’s CEO, Claudio Descalzi

Sergio Mattarella’s official visit to Algeria ended on Sunday. The Italian President attended a series of important political meetings, including with President Abdelmajid Tebboune, Prime Minister Aymen Benabderrahmane, the Presidents of the upper and lower houses of Parliament Salah Goudjil and Ibrahim Boughali.

However, this trip was chiefly about economic matters. In fact, the presidential visit served to lay the foundations for an upcoming Business Forum, which will be held in early 2022, in conjunction with an intergovernmental summit that will see the presence of Prime Minister Mario Draghi and several Italian ministers.

Italy is Algeria’s third largest trading partner (first customer and third supplier). Algeria is Italy’s first trading partner in the MENA area. In 2020 the value of the Italy-Algeria trade equaled €5.83 billions. Both countries intend to keep boosting it; the Algerian side underscored its wish to launch a collaboration plan for the development of small and medium-sized enterprises, as well as the strengthEning of cultural, scientific and technological cooperation.

However, natural gas – the price of which has climbed dramatically over the past months across the globe – remained the trip’s central theme. Methane accounts for almost all of Italian imports, whereas Algeria mainly imports machinery, refined petroleum products, chemicals and steel products.

Mr Descalzi’s presence was not coincidental. Eni enjoys a very close and longstanding relationship (since 1981) with Sonatrach, the local energy company and partner in the TransMed pipeline that brings Algerian gas to Italy via Tunisia. That pipeline is named after Enrico Mattei, the iconic Italian industrialist, to whom on Sunday Algerian authorities inaugurated a garden in the residential district of the Hydra town hall, not far from the Italian embassy.

In Algeria, Mr Mattei is widely associated with an exceptional role of support, friendship and closeness during the years of the national liberation war (1954-1962). His name also evokes the scores of Algerian students, future executives and managers of the oil and energy industry, who have been trained on his initiative in Eni schools outside Milan.

In the same spirit, Mr Descalzi is maintaining and expanding the privileged relationship with Sonatrach and Algeria. Earlier this year the two companies signed a series of deals to expand their collaboration in the upstream, R&D and decarbonisation sectors, with a special focus on renewables, biofuels and hydrogen. This entails personnel training through cooperation between Eni Corporate University and the Algerian Institut of Petrol.

Immigration and rule of law

On the political level, Mr Mattarella was the first European head of state to travel to Algiers after the inauguration of President Tebboune, who was former prime minister under former President Abdelaziz Bouteflika. This underscores the importance of the most recent visit, as it happened eighteen years after the last visit of an Italian President of the Republic, Carlo Azeglio Ciampi, in January 2003.

Immigration was one of the dominant themes of the meeting Between Presidents Mattarella and Tebboun, in the El Mouradia presidential palace. “It is our belief that the future of Africa and Europe must be common and that collaboration with the states of North Africa, starting with Algeria, is fundamental,” explained the Italian Head of State.

Later , when interviewed by the local newspaper El Moudjahid, President Mattarella added that “the fight against [human] traffickers requires the commitment of everyone on the same front. Without a common will to manage this tragedy, humanitarian reasons and the rule of law will disappear. Young African generations have the right to participate in the growth of their own territory.”

To another Algerian newspaper, Liberté, Mr Mattarella touched upon the Libyan theme, a source of concern for Italy and the EU countries as well as the other actors that overlook the Mediterranean basin. The country is at the center of the migrant trafficking routes, with knock-on effects reverberating into neighbouring Algeria.

Then he added that “Italy is certainly in favour of establishing a strengthened partnership between the EU and the countries of the Southern shore [of the Mediterranean] to better respond to the challenges of our time, focusing on the promotion of rule of law, support for inclusive and sustainable economic development, the green and digital transitions, as well as the progress of cooperation in the fields of security, conflict resolution and migration.”

China: Italy must keep its guard up, says Law
A space for Italy in the MENA area. The Fico-Chollet meeting in Washington