Home » A space for Italy in the MENA area. The Fico-Chollet meeting in Washington 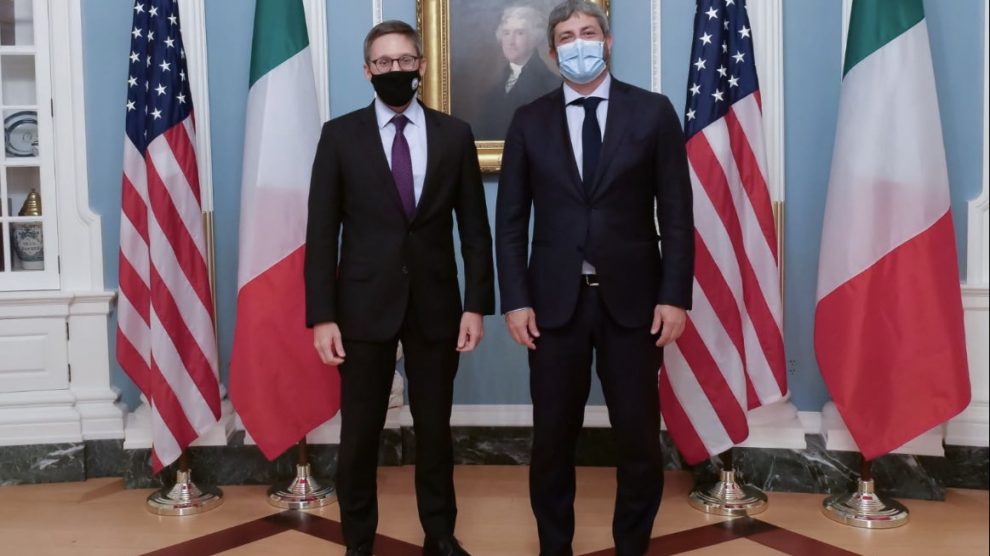 The Italian Speaker of the House was received by the US State Dept adviser, who later outlined the Biden administration’s vision for the wider Med: fewer soldiers, more diplomacy (to focus on China). Here’s why Italy has a role to play, starting with Libya and Ethiopia

During his official visit to Washington Roberto Fico, President of the Italian Chamber of Deputies and leading member of the leftist wing of the Five Star Movement, visited the State Department. There he met with Derek Chollet, an influential advisor to the State Department, on Wednesday.

The meeting hinged on the next steps in Afghanistan, the upcoming elections in Libya (and thus the upcoming Paris conference that Italy co-chairs with France) and the “Italy’s exemplary G20 leadership this year. Italy is our vital, trusted partner and we deeply appreciate their support,” tweeted Mr Chollet.

Decode39 understands the meeting laster forty minutes, was very frank and far from institutional, despite the presence of a senior American diplomat and Italy’s third most important office of State. There was also talk of the Abraham Accords and Iran. Above all was Ethiopia, an issue that’s being met with ample sensitivity on the American side, with Italy as a crucial interlocutor.

Crucially, though, what happened in the hours before and after that meeting is exceedingly noteworthy.

Earlier Jeffrey Feltman, US Special Envoy for the Horn of Africa, was on his way to the Ethiopian capital Addis Ababa, threatened by the rebel advance, to carry out Washington’s diplomatic ceasefire efforts on the ground. Italy works along the same lines; the Foreign Ministry “appeals to all parties involved in the conflict to immediately cease hostilities, and hopes to start serious and credible negotiations, to protect the Ethiopian people and to avoid a further worsening of the already-existing humanitarian crisis.” The same statement underlines Rome’s “deep concern for the deterioration of the situation in Ethiopia in recent days,” deemed “a serious risk for the stability of the country and of the whole region”.

Then, a few hours after meeting Mr Fico, Mr Chollet attended a meeting at the Center for a New American Security (CNAS), a think tank he had been a Fellow of, for the presentation of a report on US strategy in the Middle East. The document and his words are quite telling of the Biden administration’s vision for the region.

The title – “When less is more” – also speaks volumes. The report identifies three fundamental guidelines for US national security in the Middle East: counter-terrorism, nuclear non-proliferation and maintenance of the main shipping routes. What’s more, focussing on these goals employing non-military tools could free up military resources to counter China, its authors argue.

One passage details the need to “Increase burden-sharing with allies and partners to monitor and maintain safe passage around sensitive choke points such as the Bab el-Mandeb and the Strait of Hormuz to reduce a reliance on persistent U.S. naval presence.” Italy is present in both areas, with a base in Djibouti and through the EMASOH mission respectively.

“The view of this administration” – Mr Chollet later spoke of view, not strategy – “is that military force is not the sole means by which the US is going to be able to achieve its objectives […] If our military numbers may change a bit here and there, our diplomatic engagement, our political engagement, our economic engagement – if anything, it’s only intensifying.”

The US is asking allies to manage the ongoing crises in Africa and the Middle East because they no longer want to get excessively involved to govern these processes. Still, however, they need stability. Here is what analyst Emanuele Rossi wrote on this matter.

Basically, Washington deems it necessary to avoid contagion. The Sudanese coup is treated in the same way as the Tigrayan crisis: the Americans apply direct pressure and ask for their allies’ involvement to stop the war. In that area, where continuity and stability are at the basis of the US’ philosophy, Sudan and Ethiopia are viewed similarly to Mali and Chad, to Nigeria – which is halfway in the hands of IS -, to the extremely weak North Africa (Libya, as well as Tunisia, Algeria and Morocco). All these countries find themselves in a condition unacceptable for a power that intends to govern these dynamics remotely, so as to focus on something else.

Judging by Mr Chollet’s words after the meeting with Mr Fico – again, “Italy is our vital and trusted partner,” – it appears that Rome could take the role of crucial US interlocutor in the MENA area (and the wider Mediterranean). Also because the country is more trusted than others.