Home » The Quirinal Treaty: how Italy and France are working towards the post-Merkel era 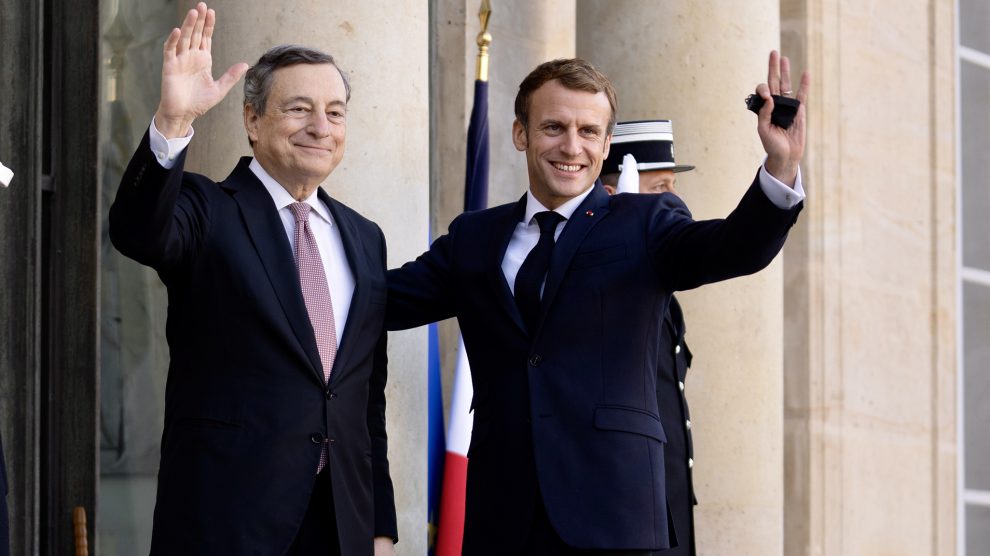 Draghi and Macron are on the brink of signing a “historic” partnership focused on wide cooperation, along the lines of the Franco-German collaboration mechanism. Here’s what’ in it, how the two countries will go about strengthening their strategic partnership, and what issues might stand in the way

Clocks are ticking ever closer to Thursday, when France and Italy are slated to sign a bilateral cooperation pact that’s been years in the making: the Quirinal Treaty (Trattato del Quirinale), named after the palace that Italian President Sergio Mattarella calls home. French President Emmanuel Macron will be in Rome on November 25 to sign the document together with Italian Prime Minister Mario Draghi.

The name itself is reminiscent of the Elysee accord between France and Germany, signed in 1963 and renewed in 2019, the building block upon which the two countries built the commercial and political closeness that became Europe’s “France-German engine”. The Quirinal Treaty is poised to work along the same lines, providing greater coordination and fostering broad cooperation between the two countries to mutual benefit.

An additional thirty pages contain a more concrete and fleshed-out work programme explaining how to reach objectives. One example is structured cooperation between Parliaments and diplomacies, with the first meeting – involving the two Foreign Commissions – scheduled for December 8-9 in Paris. The Mediterranean, the Balkans and Africa have been identified as the three foreign policy priorities.

Another focus area entails the defence sector, where Rome and Paris aim to deepen industrial collaboration, ranging from defence systems to intelligence. On migration, the two countries will join forces to go beyond the Dublin treaty (the cornerstone of the EU’s current migration management policy). And young people will benefit from measures such as easier degree and certificate conversion and a bilateral exchange programme.

According to Pierre Morcos, visiting fellow in the Europe, Russia and Eurasia program at the Center for Strategic and International Studies (CSIS) in Washington, D.C., France “is investing in its bilateral ties with key partners, Italy being one of them. Paris notably deeply value its industrial cooperation with Rome (in the maritime domain) as well as its increasing military collaboration (from the Mediterranean Sea to the Sahel, the Gulf of Guinea or the Strait of Hormuz).” Areas in which Italy and France have had divergent interests, but now seem determined to get closer, as demonstrated by the recent Conference for Libya co-chaired by the two countries.

The timing and the hurdles

The Quirinal Treaty was first envisioned in 2017 when Paolo Gentiloni was the Italian PM, and Emmanuel Macron was speaking of deepening European integration. The diplomats set out to write the draft, but progress ground to a halt in early 2019, during Giuseppe Conte’s first government, when a diplomatic crisis ensued over some of its members’ support for the anti-Macron gilet jaunes movement.

Mr Conte’s second government brought about the distension of ties and reinvigorated the process. And under Mr Draghi’s leadership, Italy and France have grown increasingly close. What’s more, with the UK out of the EU and German Chancellor Angela Merkel about to end her sixteen-year leadership, the juncture seems suited to strengthen a Franco-Italian entente and increase both countries’ weight within the bloc.

However, there are some question marks before the two countries, as they embark in such a wide-spanning cooperation. For one, President Macron is up for reelection in April 2022, and if he loses his seat his successor may not fully approve of such an endeavour. Italy, on the other hand, will elect its next president early next year – with some throwing Mr Draghi’s name in the ring – and will face political elections in 2023.

Moreover, there are economic hurdles to clear. “The partnership may be good but the timing is not ideal” argued the Italian historian and economist Giulio Sapelli, who teaches at the Statale University in Milan. “There are pending industrial issues that should be resolved first, [such as the] Leonardo-Oto Melara affair and the negotiations between Vivendi and KKR in TIM,” he said, referring to ongoing industrial matters featuring French and Italian interlacing interests.

How the Kremlin attacked Italy over an op-ed
Minister Cartabia travels to the US. Here’s why it matters