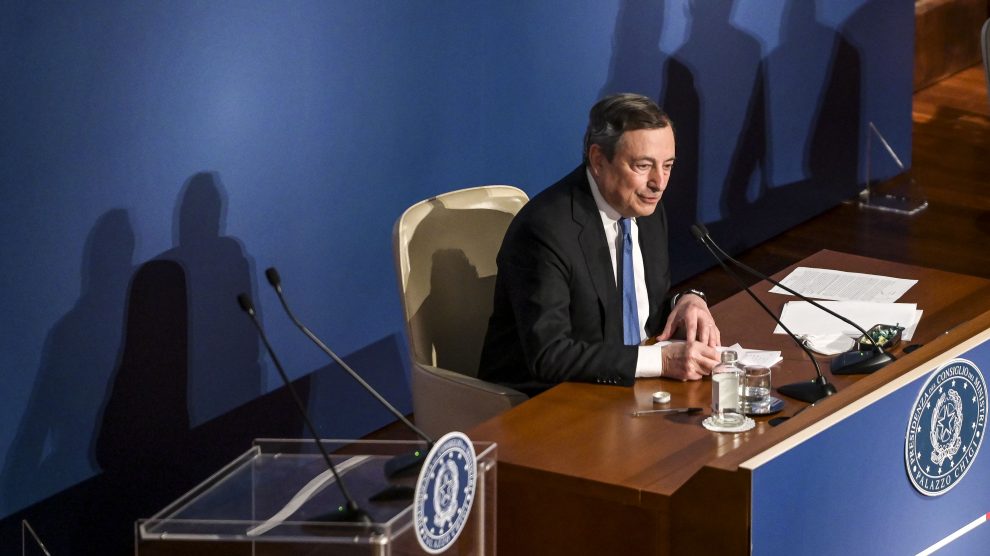 In taking stock of 2021, the Italian PM revelled in the country's impressive performance. But the near future holds several uncertainties, starting with his possible departure from his position. What does this mean for Italy’s recovery and resilience plan?

On December 22, the Italian Prime Minister Mario Draghi held the traditional end-of-year press event where he took stock of the year 2021 and his government’s progress so far. “We have done well this year,” he said; “there is no reason to fear that we will do well in the future, too.”

He then announced that the government had met all 51 objectives set for the second half of 2021 in Italy’s National Recovery and Resilience Plan (NRRP), which dictates in great detail what Italy must do to unlock the European funding on a six-month basis up to 2026. Concordantly, the EU wrote the first check and sent €24 billion Rome’s way – the first fraction of a total of over €235 billion.

That’s easier said than done, given the historical tendencies of Italy’s famously fractious political ecosystem and general sluggishness to measure up with other European member states. In that regard, Mr Draghi’s government stood out as an exception – it delivered an impressive array of results working at breakneck speed and relying on continuous confidence votes to keep the momentum and ensure the parties’ unfaltering support.

The objectives so far included politically explosive matters, such as long-deferred and awaited reforms of the justice and taxation systems. The former EBC head was able to accomplish as much partly thanks to his status as a technocrat (underscored by his personality’s influence) and the support of nearly all political forces in Parliament, who in February joined forces in the name of national unity to improve the vaccination drive and kickstart Italy’s economic recovery.

So far, the experiment has proved successful, as Mr Draghi’s performance shows. Even in the face of a recent flare-up of the BPT-BUND spread, which indicates the distance between Italy’s and Germany’s economies through the value of their bond yields. Italy is growing at a projected rate of over 6%; “if we continue growing, worries about the spread are lesser. Growth is the barometer of our country’s credibility: this is what we must aim towards,” said the PM.

The first relation on the NRRP’s progress was approved by Parliament and made available by Christmas Eve. With it came a fresh set of concerns, as it emerged that the year 2022 foresees 102 new objectives, including 66 new reforms. And as Mr Draghi covertly signalled that his work is essentially done and that he might be willing to become Italy’s next President – which will be chosen earlier next year – there are mounting fears that his successor may not be able to keep the same pace of economic growth or command the same kind of majority, thus endangering the NRRP’s implementation, as all these matters are deeply interlinked.

But suppose Italian politics reverts to its usual unproductive bickering. In that case, it’s fair to assume that not all objectives will be met – meaning that the EU could refuse to write the following cheques, which would endanger the whole recovery facility through knock-on effects. Many Italians and foreign markets have been betting on him to up Italy’s chances to finally emerge from economic stagnation.

According to Paolo Mieli, an enormously authoritative journalist who directed Italy’s leading newspaper, Il Corriere della Sera, parties are “seeking revenge […] in the proximity of a political and institutional transition with infinite implications.” Who knows if this will be at the cost of not having Mr Draghi as head of the government, and neither as President of the Republic.

Still, the former head of the ECB told Parliament there is no cause for concern. He stated that the groundwork had been laid and that his successor could easily take up the process, should there be one before the natural end of this legislation in mid-2023. That, together with the large number of Italians who fear losing him in the fashion described by Mr Mieli, could ensure a healthy degree of continuity and safeguard Italy’s road to recovery.

Di Maio’s visit to Tunisia and Italy’s role to play
About the interplay between Italy and the US. The words of Ambassador Zappia