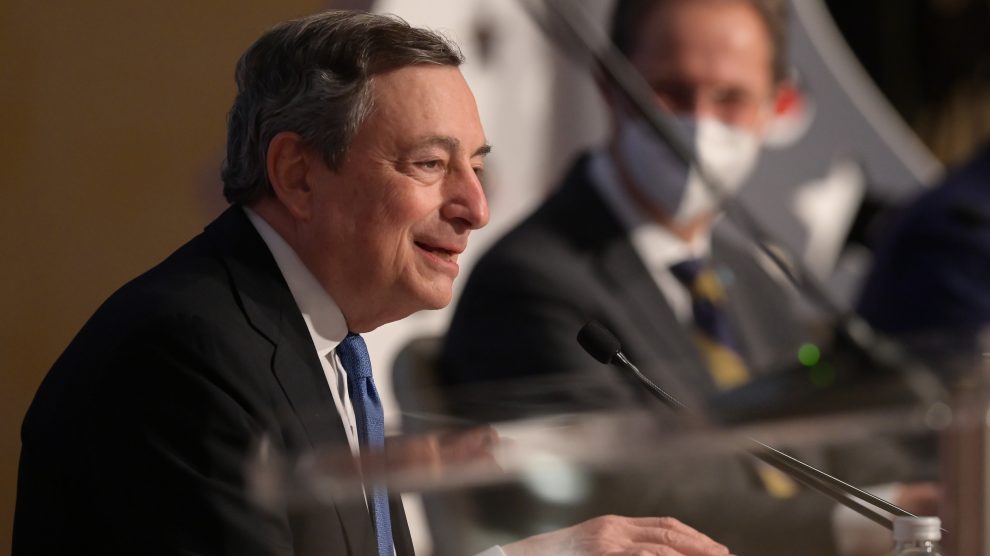 At the traditional event, the PM opened the door to his candidacy to President through a speech that sounded somewhat final. The government's fate is in the hands of Parliament, he said before reassuring the markets. But several unresolved issues linger still

“My personal destiny counts for nothing. I am just a man, or rather a grandfather, at the service of the institutions.” This was among Mario Draghi’s highlights as he spoke to the press during the traditional end-of-year conference.

MPs are readying to elect President Sergio Mattarella’s replacement in a matter of weeks, and his name is among the most favoured. The PM, however, said he does not have “personal aspirations” for that particular position.

During the presser, Mr Draghi summed up his ten months at the helm of Italy – a balance sheet that sounds at least like a goodbye, if not a farewell. He talked about the government having completed nearly all of the tasks it set out to do and threw in another “whatever it takes” by remarking that “the government is ready to support the economy in the event of a slowdown.”

“The main challenge remains that of increasing the growth rate in the long term and solving structural weaknesses, starting from inequalities,” he continued, pointing out that “there cannot be progress or economic growth without social cohesion, if the poor are left behind.”

He also added that all 51 objectives of Italy’s National Recovery and Resilience Plan, upon which nearly €200 billion in funds and grants are contingent, had been met. That was one of the two reasons for his government’s birth, the other being the vaccination drive, also quite successful so far.

Europe is listening, markets are too. The shockwave of Omicron, the Covid variant that “opens a new phase of the pandemic,” is frightening – as is the uncertainty over the future of the government, which materialised in the Btp-Bund spread closing at 131 points on Tuesday.

The PM sought to reassure his audience and shore up Rome’s position. “We have done well this year. There is no reason to fear that we will do well in the future, too.” The point, he clarified, is not the government nor the presidential seat; “the day-to-day responsibility of government action is in the hands of Parliament, and it is up to Parliament to decide on its continuation.”

The former ECB head was trying to explain that the political games for the fate of the presidential seat cannot be reduced to a game of personal aspirations. But he also suggests that no option is off the table, least of all his own name. And, notably, there is no certainty around any name yet.

The parties, which are divided even within their respective coalitions, have not come up with a name for President Mattarella’s successor. There is an increasingly real risk that the spirit of unity dictated by the emergency will be shattered by the tactics of the Parliament, prepared in the parties’ pre-Christmas meetings.

Mr Draghi is not partaking in those manoeuvers. He endorsed his government’s actions and did not fail to thank the majority, the largest in the history of the Republic. He recalled the “spirit of unity” that President Mattarella had already emphasised in his farewell speech to the highest offices of State, when he spoke of “unity of intent and effort” and a “new season of duties.”

That season is far from over. The PM knows it and makes no mystery of it. If the first vaccination campaign has been successfully completed – today 80% of all Italians have received at least one dose – administering the third dose, which is essential to curb the aggressiveness of Omicron, is slow. The “normality [we’ve] achieved” must be defended, he said, starting from the schools still undercut by a degree of remote learning.

Then there are the pending economic and industrial issues. The fate of big Italian players – such as telco giant TIM and MPS, a major bank -, tax authorities and the tug-of-war with the unions. At the EU level there’s a future reform of the Stability and Growth Pact that will decide whether or not member States will return to the old austerity rules, where Italy, Mr Draghi promised, “will make its voice heard” alongside Emmanuel Macron’s France and Germany’s new Chancellor, Olaf Scholz.

Mr Draghi’s relocation to the presidentship, if it happens, will cause a massive impact. This is the unspoken truth that lies at the origin of the current stalemate and makes other European chancelleries frown. But the current PM said nothing of the next Head of State. Thus, he disengaged himself from the reporters’ barrage of questions. The ideal “model” for the President of the Republic is Mr Mattarella, he said, who has “played his role splendidly, with lucidity and wisdom.”

About the interplay between Italy and the US. The words of Ambassador Zappia
Italy’s take on NATO’s next Strategic Concept