Home » A portrait of Lord Edward Llewellyn, the UK’s new Ambassador to Italy 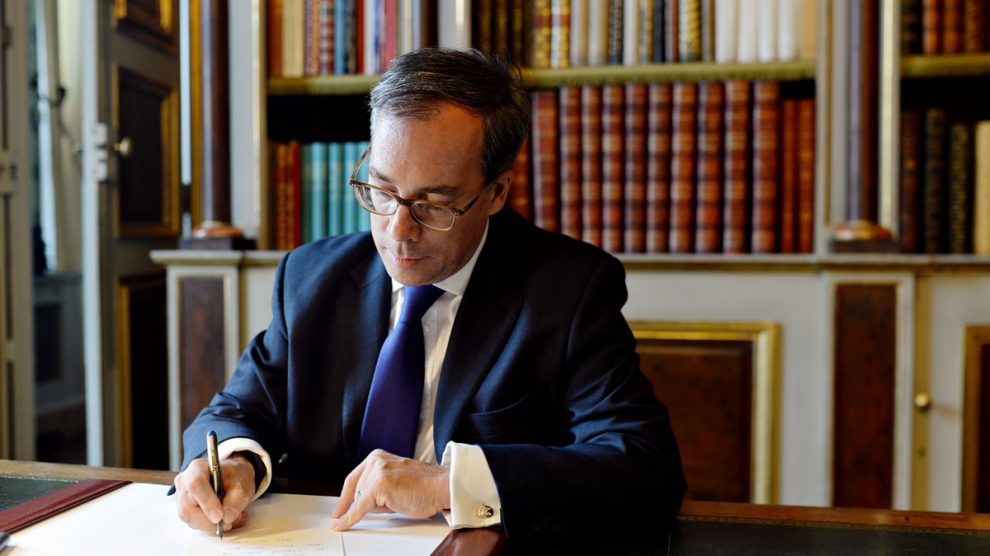 Born in 1965, a member of the Tory elite, former assistant to Thatcher and historic right-hand man of Cameron, the Lord comes in from Paris. He was hand-picked by PM Johnson to replace Jill Morris

His name has been circulating insistently for a few weeks now. Then he shared the November 22 tweet through which Rear Admiral Steve Moorhouse announced that Italy became the 3rd nation to land F-35Bs on the deck of the HMS Queen Elizabeth – the largest aircraft carrier in Europe, a symbol of Global Britain, currently on a 26,000-mile trip from and to Portsmouth (departed on May 22), across the Mediterranean and the Middle East to reach the Indo-Pacific.

Many thought that retweet was an unofficial confirmation, as the diplomatic world waited for the official one. The latter arrived today from the Foreign, Commonwealth and Development Office: Edward Llewellyn, Baron Llewellyn of Steep, will be the next ambassador of the United Kingdom to Italy and (as non-resident) in San Marino. He picks up the baton from Jill Morris, who is leaving Italy after five and a half years of service and gave the embassy’s keys to her deputy, Eleanor Sanders, who will be charges d’affaires until Lord Llewellyn arrives in Rome (before the end of February).

Known to everyone as Ed, Lord Llewellyn has spent the last few months, in keeping with the tradition of British ambassadors, learning the language of the country in which he will serve. Before that, he lived and worked in Paris; he was appointed in September 2016 by then-Foreign Minister Boris Johnson, the current prime minister and one of the main promoters of his appointment to the embassy in Rome.

He spent 11 years at David Cameron’s side as Chief of Staff. His first stint was between 2005 and 2010, when the Tory politician was the leader of the opposition under the governments of Tony Blair and Gordon Brown. The second came when Mr Cameron became PM, that is, from 2010 until his resignation after being defeated in the Brexit referendum on June 23, 2016.

The partnership between Lord Llewellyn, born in 1965, and Mr Cameron, 1966, dates back to school. Not just any school, but Eton College, where twenty UK PMs hailed from – five since World War II, including the last two, Mr Cameron himself and PM Johnson. Princes William and Harry also studied there, in Berkshire, instead of attending the Naval College, the school of Gordonstoun, or being entrusted to a private tutor, as tradition always demanded to members of the royal family in the direct line of succession.

After graduating from Eton and a brief political stint at the Conservative Party headquarters, Lord Llewellyn started studying at the New College in Oxford. Among his classmates was Steve Hilton, one of the architects of Cameronism, who overturned Margaret Thatcher’s mantra that held there was no such thing as society while embracing the battle cry of “big society” (as opposed to Labour’s “big government”). Mr Hilton felt betrayed by Mr Cameron and left him after two years in 10 Downing Street. More recently, he sided with the die-hard supporters of former US President Donald Trump to the point of questioning the results of the November 2020 election won by Joe Biden.

After finishing his studies, it was time for Lord Llewellyn to return to politics – among the Tories, naturally. From 1988 to 1992 he worked at the Conservative Research Department. He became private secretary to Margaret Thatcher in 1991, the year after the Iron Lady’s farewell to Number 10, her home since 1979. On April 8, 2020, the seventh anniversary of her death, he remembered her with a tweet and a photograph showing them together, a few years after she left politics, at the Government House in Hong Kong.

Back then, Lord Llewellyn was in Hong Kong alongside Chris Patten, chairman of the Conservative Party and architect of a surprise election victory in 1992. For five years, until 1997, Mr Patten had been governor of Hong Kong – the last one, he who transferred sovereignty over Hong Kong to the People’s Republic of China. In that year, with that act marking the end of the British Empire, Lord Llewellyn was made a Member of the Order of the British Empire and promoted to officer in 2006. He had worked in the office of the High Representative for Bosnia and Herzegovina (1997-1999), reunited with Mr Patten during his time as European Commissioner (1999-2002), and returned to Sarajevo as Chief of Staff to High Representative Paddy Ashdown (2002-2005).

In August 2016, the appointment as Lord at Cameron’s Resignation Honours sealed the association of the former PM and his historic right-hand man. The following month Mr Johnson’s announced that Lord Llewellyn would be the new ambassador to Paris, where his wife Anne was born – she birthed three children which they call “Franco-British” – and where he was stationed until last August, when he passed the baton to Menna Rawlings, the first woman to hold this prestigious post.

Lord Llewelyn recounted his French stint a few days before leaving the Hotel de Charost, the official residence of the British ambassador to France located within walking distance of the Elysee Palace, on The Connexion. “So much has happened in the last five years that it’s hard to know where to start,” he wrote. But the text reveals how leaving the EU has inevitably been at the centre of his everyday work. From consular issues to tensions with the French government over fishing rights, it has been five difficult years: but leaving would have been “a hard blow,” he wrote, whose life well represented the Franco-British relationship, which he calls “alive, breathing and complex.”