Home » Mattarella re-elected: what it means for Italy and the EU 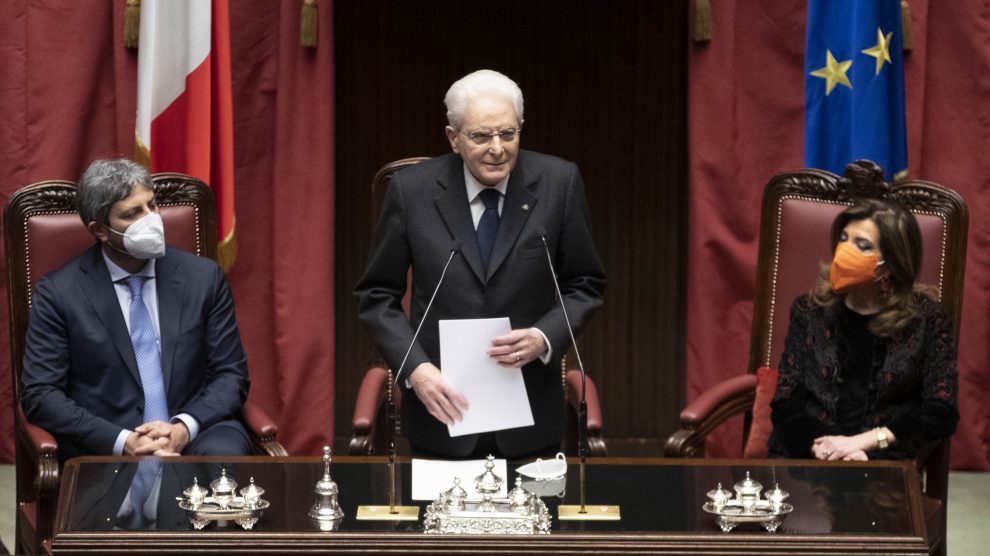 With Mario Draghi staying on as prime minister, Italy has an opportunity to help lead an economic and political recovery from the pandemic that secures Europe’s future

Last week, the Italian parliament confirmed that Sergio Mattarella would remain president for another seven years, with Mario Draghi staying on as prime minister and Giuliano Amato nominated as president of the Constitutional Court. The most visible and immediate effect of this process is to have strengthened Italian institutions with three leaders of proven experience and ability.

However, this was not an easy task. On the contrary, the ‘big voters’ eligible to choose the head of State – the two chambers of the parliament and the regional delegates – took almost one week and eight plenary sessions to finally ask Mr Mattarella to stay in his position.

Mr Draghi was in some ways the most suitable candidate for the presidency, but two fundamental political considerations prevented him from being nominated. The first was the fact that his election as president would have led to a political crisis, the formation of a new government, and probably a snap general election (bringing forward a vote currently scheduled to take place by June 2023).

The second was Mr Draghi’s role as a guarantor of Italy’s relationship with the European Union, including in the design and implementation of the Italian National Plan for Recovery and Resilience – which draws heavily on EU funding. Due to these two considerations, most voters agreed to ask President Mattarella to accept a second mandate, implicitly confirming that Mr Draghi would continue to be prime minister.

The vote has several international implications. The first is that Mr Draghi will help ensure that Italy makes good use of funds from NextGenerationEU, the union’s recovery plan. The country will need a stable government and a leader who is internationally respected if it is to achieve this. Unless Italy plays its cards right, it will lose an unprecedented opportunity to revitalise its economy.

Secondly, Mr Draghi is important to the balance of power between EU member states. A coalition of France, Germany, Italy, and perhaps Spain has the potential to lead an economic and political recovery from the Covid-19 pandemic that will secure Europe’s future. But this will require political stability and continuity – which are particularly elusive at a time when Germany has a new government and French President Emmanuel Macron is seeking re-election. With Mr Draghi now likely to remain prime minister until the 2023 election, there is less reason to worry about instability originating in the EU’s third-largest economy.

Thirdly, in an age of growing competition between great powers, Mr Draghi’s government has a chance to make its mark in multilateral forums on various pressing issues. For instance, with Russia challenging Europe’s security, access to energy, and political cohesion, the Italian government could have an important part to play in strengthening the union as a sovereign actor.

Italy is widely regarded as having preferential relations with Russia due to their strong commercial ties. Indeed, Italy imports 42 per cent of its gas from Russia. However,  Mr Draghi has a much stronger commitment to multilateralism and the transatlantic relationship than some of his recent predecessors. This makes him relatively well-placed to achieve a balance in the Italy-Russia relationship – which will also be important to Rome’s efforts to deal with issues such as the crisis in Libya.

Judging by the latest polls, a snap election would have produced a Eurosceptic, centre-right government led by the League and the Brothers of Italy (despite the recent divisions between the two parties). However, unless it engages in a significant reshuffle, the Draghi government should stay in place long enough to implement NextGenerationEU projects, promote stability in the Mediterranean region, and help address several challenges that the EU has neglected for too long, including the reform of its migration policy and fiscal rules.

On all these issues, Italy will likely need to both seek support for its policy proposals from its European partners and provide such support in return. The Draghi government has the political credibility and constructive stability Italy needs to accelerate European integration and strengthen the EU as a sovereign actor.

It is not about Ukraine. An op-ed by Putin’s advisor
Dreaming of the GOP: Matteo Salvini’s gamble