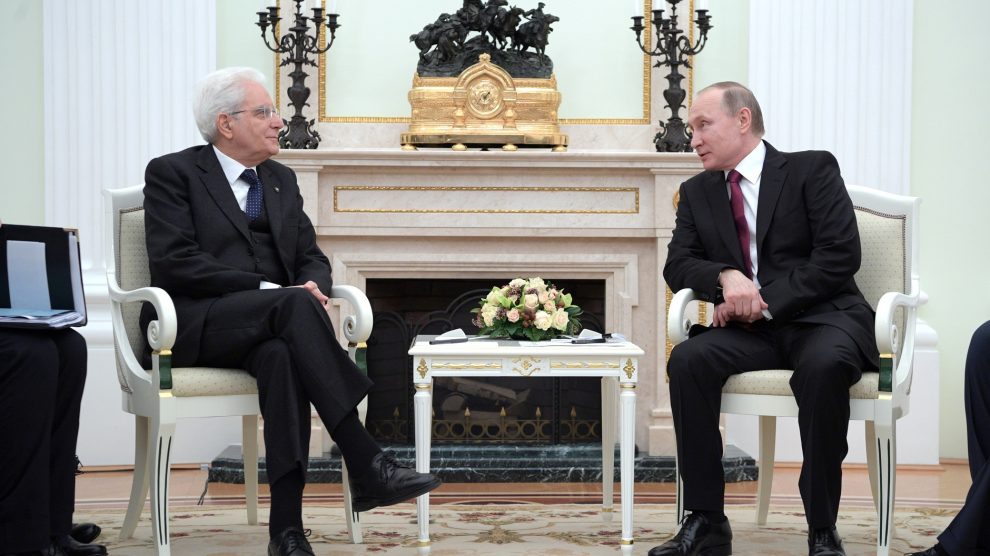 Russia’s war on Ukraine has prompted urgent changes in Italian foreign policy. Rome’s efforts to distance itself from Moscow are creating major challenges at home

Russia’s war on Ukraine has thrown Italy’s foreign policy orientation over the last 20 years into sharp relief. Italian Prime Minister Mario Draghi is now having to deal with the consequences of that orientation. He faces a difficult task in bringing about a significant change in Italy’s approach to Russia.

Three of the parties in the coalition government – Forza Italia, the Five Star Movement, and the League – have long pursued the ‘special relationship’ with Moscow most often associated with Silvio Berlusconi, former prime minister and the founder of Forza Italia. But, since the Russian invasion, both Draghi and his foreign minister, Five Star Movement member Luigi Di Maio, have been united in their condemnation of Russia’s actions. Their rhetoric has completely aligned with that of leaders in other EU member states, even if its approach to sanctions on Russia lagged behind slightly.

Virtually all Italian political leaders and members of parliament have joined them in condemning Russia’s actions. This includes Giorgia Meloni, leader of Brothers of Italy – which is a conservative, Eurosceptic, and anti-immigrant party in the same broad political family as Poland’s Law and Justice party. In both chambers, Ms Meloni’s party has adopted a position of unequivocal support for the European Union and Italy in dealing with Russia. Even the anti-establishment Five Star Movement – some of whose members have, in the past, been among the most outspoken supporters of Russia and China – has backed the government’s position. League leader Matteo Salvini was sluggish in identifying Russia as the aggressor. Berlusconi, for his part, has been experiencing a long personal struggle that eventually led him to make an official statement of opposition to the war.

Therefore, this war has reshaped Italian domestic politics. Italy’s foreign policy and external relations, however, were changing even before the invasion. When Mr Draghi formed his government in February 2021, he immediately took a firm stand in support of the EU and the West more broadly. His declarations on Russia were different from those of his predecessors, often reflecting his concern about civil rights violations in Russia. Importantly, he no longer mentioned Russia as a partner. Rather, it became an actor with which to engage in dialogue.

So, Italy’s alignment with the EU, the United States, NATO, and the G7 in condemning Russia’s invasion should not have come as a surprise – but it did. And this was largely due to Italian political elites’ attempts to woo Moscow in the last 20 years.

Perceptions of these elites’ closeness to Russia also run contrary to Italian public opinion. An ECFR poll published in January 2022 found that there was a surprising consensus among people across the EU, including Italians, that Russia would probably invade Ukraine in 2022. Respondents to the survey also agreed that European countries had a duty to defend Ukraine and that the conflict would be a European problem. Italian citizens were most worried about the economic consequences of Russia’s invasion of Ukraine, particularly its impact on energy supplies.

The Italian political line on Russia may now be firm and clear. But it will be difficult to deal with the consequences of Italy’s new enthusiasm for sanctions, particularly given its energy dependence on Russia. As Arturo Varvelli has pointed out, the country is dependent on Russian gas and will struggle to find substitutes in the short term. Additionally, Italy does not have many gas terminals, while its supplies via pipelines from the south are restricted due to instability in Libya and limited production in Algeria.

PM Draghi has repeatedly acknowledged this difficult reality. In a speech to parliament on 1 March, he reiterated the fact that Italy imports 95 per cent of its gas, more than 40 per cent of which comes from Russia. Italy’s official position is that it will take between 24 and 30 months to become independent from Russian gas, as Minister for Ecological Transition Roberto Cingolani recently explained.

The long-term plan is to stabilise and expand existing alternatives to Russian gas, such as that sourced through Azerbaijan’s Trans Adriatic Pipeline and Libya’s GreenStream Pipeline. The Transmediterranean Pipeline, which transports gas from Algeria via Tunisia to Sicily, will also play a key role in this – as Mr Di Maio emphasised in his recent talks with Algerian officials. Indeed, Algeria already provides 28.4 per cent of Italy’s gas. In the even longer term, Italy should aim to reduce its reliance on gas by expanding its sources of renewable energy. FM Di Maio confirmed this objective during a visit to Doha on 5 March, a trip during which he and his Qatari counterpart agreed to strengthen bilateral cooperation on energy.

To do so, Italy has been allocated €59.47 billion in NextGenerationEU funds for green initiatives. However, there is now a risk that the country’s commitment to the green energy transition could be shaken by concerns about immediate energy shortages.

Therefore, as Mr Draghi has observed, Italy is now facing choices that were unimaginable just a few weeks ago. But Rome is not alone in this process. Of course, the necessary long-term changes are challenging for Italy and for Europe as a whole. Germany, for example, has also been forced to drastically rethink its foreign and energy policies. But, as Mark Leonard and Jonathan Hackenbroich emphasise, the only way for Germany to escape its historical inhibitions and be true to its post-war development is to change – and to finally emerge as a geopolitical actor.

This change should occur in all EU member states. Russia’s war on Ukraine has finally led to a coordinated and unanimous strategy on sanctions. Extensive Russian efforts to undermine EU unity have failed, at least for the time being. Russia’s one political success has been to remind the EU of its energy frailty – which the union had ignored for too long.

However, the EU is unlikely to face an imminent energy shortage. Its challenges in this area will emerge a little further down the line. They will also overlap with those generated by the covid-19 pandemic, and will bring old and unresolved issues such as refugee policy back to the surface. The effects of the pandemic and of sanctions on Russia also mean the union is facing a significant economic shock. And Italy is vulnerable to the effects of all these crises.

Therefore, as Mr Varvelli and I argued in February 2022, the political stability created by the Draghi government and the recent re-election of Sergio Mattarella as president is an advantage for Rome. Russia’s war on Ukraine has only underlined the importance of this. Domestic stability should help Italy support its allies in Europe – particularly France as the president of the Council of the EU and Germany as the president of the G7 – and, in doing so, strengthen the EU’s unity.

Germany and the fracturing of European energy unity. Experts comment

The EU failed to agree on a shared price cap on gas. Germany’s Scholz, who opposed it, set a national one, unsettling Italy’s Draghi. We reached out...

The likeliest next prime minister won’t tone down Mario Draghi’s hard stance on Russia and will support Ukraine, as she signalled multiple times