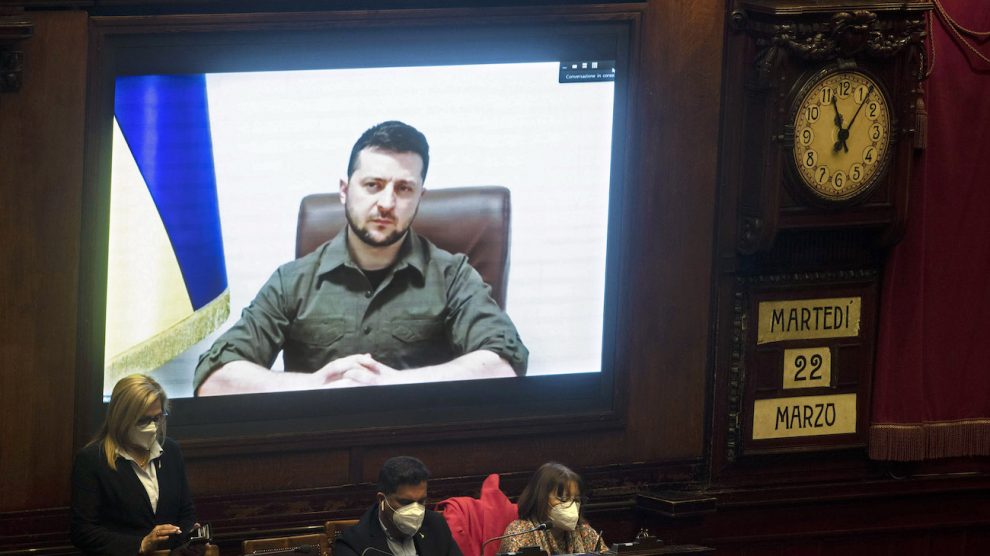 The Ukrainian president addressed the Italian Parliament, thanked it for its support and pushed – softly – for more. Aspenia’s Marta Dassù believes the Italian PM’s answer, with his call for Ukraine to enter the EU, was perfect: here’s why

On Tuesday morning, Ukrainian President Volodymyr Zelensky addressed the Italian Parliament after having been welcomed by a standing ovation. He thanked Italy for its support – political, logistical, and humanitarian – and for hosting over 70,000 Ukrainian refugees.

Having described the dramatic effects of Vladimir Putin’s invasion of his country, Mr Zelensky also called on Rome to counter Moscow through assets freezing and port closures. Then he warned that the Russian President’s goal “is not Ukraine, but Europe. It’s to have control over your politics, your values. Ukraine is just the gateway for the Russian army to enter Europe.”

“[Mr] Zelensky was calm and measured in his address to the Italian Parliament,” said Marta Dassù, director of Aspenia and former deputy foreign minister. Speaking to Decode39, she noted that the Ukrainian president did push for more sanctions, alluding to oil and gas, but avoiding the harsh tones he had used in the German Parliament.

The expert noted that Mr Zelensky tailored his speech to “a country used to, and ready, to offer solidarity more than being a major security player.” He did so by focussing on the humanitarian issue and framing it as a result of a war waged by “one man only,” having never mentioned Mr Putin by name.

Ms Dassù believes the Ukrainian leader’s speech offered three main takeaways. Firstly, “[Mr] Zelensky appears to have taken some cues from previous addresses, avoiding provocative points”. Secondly, although Italy may not be in the highest European military league, the country “is key to preserve European cohesion on sanctions and arms transfers.”

“Thirdly, [Mr] Zelensky himself – after three weeks of war – is entering a new psychological phase: he must avert a humanitarian catastrophe in his country, and he needs help in forcing [Mr] Putin to the negotiating table.” Hence, she added, Mario Draghi’s response was simply perfect.

Speaking after the Ukrainian President, the Italian prime minister thanked him and reiterated Rome’s support for his cause. He also stated – very clearly – that such level of support entailed weapons shipment, and added that Italy supports Ukraine’s entrance into the European Union.

“Today, Ukraine is not only defending itself. It is defending our peace, our freedom and our security,” said PM Draghi. “It is defending the multilateral order based on rules and rights that we have painstakingly built up since the war. Italy is deeply grateful to you.”

The former ECB head also took stock of the effectiveness of the Western response, which came in the form of coordinated sanctions and logistical support. Italy, he said, has “responded, together with our European partners, to the Ukrainian government’s requests for assistance in defending itself against the Russian invasion. We are ready to do even more.”

“In the face of Russia, which wanted us divided, we stood united – as the European Union and as the Atlantic Alliance.”