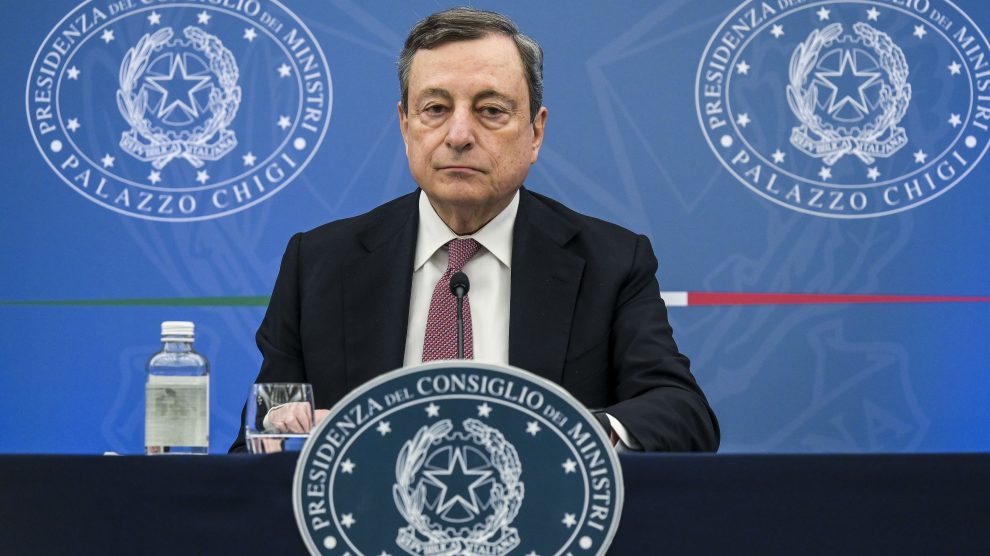 In one line, the Italian PM wrote the equation that could provide a way out of the Russian war in Ukraine. Putin is losing on the ground, but he will not stop until the Russian economy faces an actual default. An op-ed by veteran columnist, senior researcher and Sinologist Francesco Sisci

On Wednesday, Prime Minister Mario Draghi quipped that, if cornered, Italy and Europe will have to choose between Russian gas and Ukrainian peace. He is right. The Italian Prime Minister has grasped the nettle, but perhaps it is appropriate to explain the line of reasoning.

With its foreign reserves locked up, Russia can only pay the interest on its maturing debts with gas sales. If Russia does not pay its debts, it defaults: its currency is worth scrap paper, and it cannot buy much.It would be left with grain and gas only, but no cookers or pots to burn the gas or cook the grain.

Europe is by far the biggest market for Russian exports. Gas is not something that can be moved easily from the right or left, nor is there so much demand in the world for gas that the Chinese market, for instance, can be a viable alternative. The Russia-China pipeline will only be completed in 2026.

So if the EU stopped buying gas, Russia would have no one to sell it to, would have difficulty finding money to pay off maturing debts, and risk default. How long can Russia resist without the EU’s euros? Precise estimates vary, but everyone agrees that the country wouldn’t last more than a few weeks.

Instead, as Mr Draghi explained, the EU can live normally with its current gas reserves for six months. There is no match: Russia goes down before Europe even sees any water in the event of a supply cut. However, the purpose of his declaration is not to drive Russia into default; it’s about having genuine negotiating leverage to press Russia into really dealing with Ukraine and ending the war.

Moscow often bluffed in recent weeks (“I’ll cut off your gas,” then silence; “I want payments in roubles,” then silence; “I’ll use nuclear power,” then silence). So the EU must have a real, viable plan and believe in the possibility of putting it into practice to be taken seriously by an expert of bluff and brinkmanship such as Russian President Vladimir Putin.

We must entertain the real possibility of cutting gas purchases to push Moscow into a possible default in order to achieve peace as soon as possible. This is actually in Russia’s interests, too, not solely to ensure the continuity of the stream of euros, in what should more properly be called a euro pipeline instead of a gas pipeline.

Moscow has lost the war politically, and we have said so repeatedly, but it has also been losing militarily for a couple of weeks now. It was defeated in the battle of Kyiv and has retreated. Now it is trying to achieve a victory in the country’s east, but its troops are demoralised and beaten. It also faces Ukrainian resistance, which remains bitter and galvanised by stances in the West and new weapons from Europe and America.

Under these conditions, military defeat is only a matter of time. Ukraine is a country in arms, with millions of internal volunteers and thousands of volunteers from abroad; it has practically endless supplies of equipment from the US and EU.

On the other hand, Russia has very limited human and material resources. It has lost over 20% of its troops. Sending new soldiers to the front is a complicated business, and it must also explain to frightened young people what is vital for Moscow in the war in Ukraine. Its arms factories do not have the capabilities of others. Under these conditions, it’s only a matter of time before the current Russian defeat turns into a debacle.

Russia’s failure is not in Europe’s best interest. Still, to avoid it, Moscow must negotiate as soon as possible, before the situation degenerates beyond all limits. If Mr Putin does not see the rationality of this exercise on his own, maybe the real risk of default will do the trick. An honourable surrender is better than a dishonourable one.

Ultimately, this is the point of the “gas or peace” operation: to shorten the war and also cut the losses for Russia and Mr Putin. The process is not surefire, nor a mathematical equation, but its success is possible and even likely. Indeed, with these conditions, it would only hasten the natural course of things by trying to save at least the remnants of what exists.

Does the EU risk, in paying a comfort price for this? Yes, but it is less than dragging out the war any longer and disproportionately increasing its human and material costs.

A certain idea of Europe: How the next French president can lead
Letta-Meloni, the cordial entente (with an eye on the future)