Home » Letta-Meloni, the cordial entente (with an eye on the future) 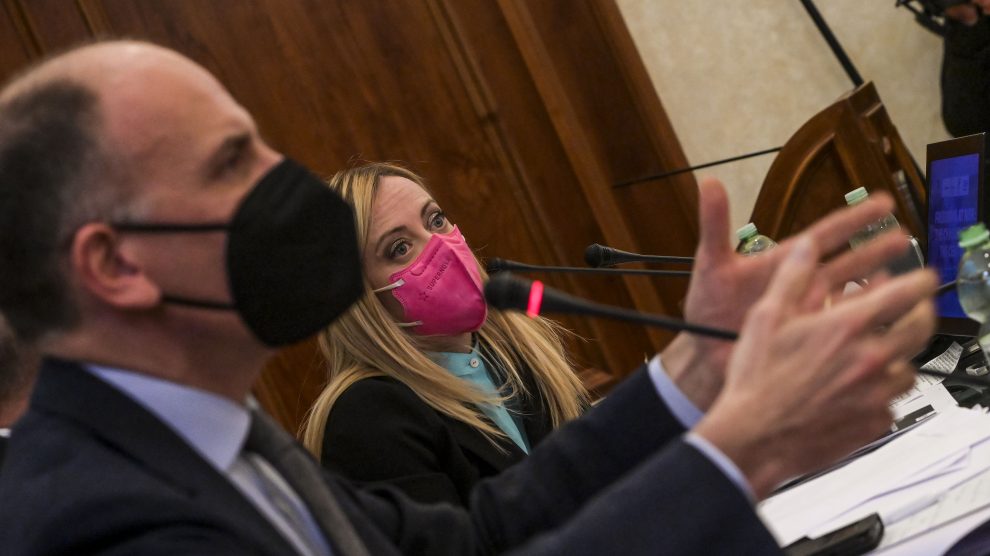 A recent Senate conference featured two adversarial leaders – the Democratic Party’s Enrico Letta on the left and Brothers of Italy’s Giorgia Meloni on the right – converging on several fronts, from the condemnation of the Russian invasion to the next electoral law

They were the first to joke about it: Giorgia Meloni and Enrico Letta acknowledged their “idyllic moment”. Sharing a Senate hall, the leaders of Brothers of Italy (the right-wing opposition party) and the Democratic Party (left-wing government partner) talked about the war but appeared to promise each other peace.

The two were attending an event to present the latest report by the Farefuturo Foundation, which is chaired by Adolfo Urso, who is a senator and the president of Parliament’s intelligence committee. He acted as the officiant of an off meeting between the best enemies in Italian politics. “We are proud of our adversity,” said Ms Meloni as she entered.

In the polls, it’s a two-way battle. For months, their parties have been competing for the top spot in a head-to-head race that promises to last until next year’s political elections. The DP is in the government and acts as the guarantor of the Mario Draghi era. The second is the only major pasty at the opposition. Even if, at times, that margin seems to disappear. As in the case of the Russian war in Ukraine, which has reshaped Italy’s political geometries.

Mr Letta and Ms Meloni played a very similar score in the Senate. They almost competed, condemning the “insane and criminal invasion” (the first) and supporting the Ukrainians’ armed and “legitimate defence” (the second). Notably, though, these parallel convergences have an Atlanticist aftertaste.

Since the beginning of hostilities, both have chosen the hard line: no discounts to Vladimir Putin. But don’t call it a turning point. Because – says Ms Meloni, a little annoyed by the Atlanticist entente with her rivals that the press is going on about –, “the Italian right has had no ambiguity for seventy years,” and after all, “it was the Italian communists who cheered for the Soviet tanks in Budapest.”

Skirmishes aside, there is a lot of agreement. For example, on the divisive issue of military supplies to Volodymyr Zelensky and the Ukrainian resistance. If the League’s Matteo Salvini believes “there is too much talk of weapons,” Mr Letta and Ms Meloni beg to differ. “Not only the resistance of the Ukrainian people, but the very idea of democracy is at stake,” saids the former. “It is surreal that someone is asking the Ukrainians to surrender,” retorted the latter.

Democracy, dictatorship and freedom are making their way back into the vocabulary of Italian politics. And for once, there is no mention of Covid. In Italy, more than elsewhere, the war in Ukraine is awakening opposing feelings about the very foundations of the democratic system.

A survey found in Farefuturo’s report and made together with the International Republican Institute, an influential American think tank, reads that 41% of Italians would like a “strong man” who acts without Parliament: a singularity compared to other European countries.

Freedom, says Mr Letta, will be “the great matter of our century.” Meloni even quoted Aldo Moro’s daughter, Maria Fida, in saying that “there are people who gave their lives for freedom.” But she has chosen to follow the furrow of American conservatism. It is no coincidence that she did not fail to reserve an assist for her (former?) ally Donald Trump by condemning the “censorship” inflicted by Big Tech on “a democratically elected president.”

The problem, if anything, is how to interpret freedom. Here, the Senate duellists emphasised their distance. Two pandemic years have seen their parties on opposite sides; the Dems bent on rigorism and BoI members nodding to the anti-Codiv pass and anti-vaxxers. “We have never asked to do less, but to do better,” the latters’ leader explained.

The synthesis, however, was soon found again when the speech went to the next real political node from here to the end of the legislature: electoral law. Ms Meloni warned Mr Letta about the necessity to embrace majoritarian representation, as it can “guarantee clear alliances and programmes in which the citizens choose the [next Parliamentary] majority.”

The Dem leader did not shy away from the issue. He pointed the finger at “twenty years of blocked lists” and spoke of “citizens who do not feel represented because they do not have the slightest ability to influence” the outcome at the moment of choice.

It is difficult, however, for the agreement to break the deadlock: MPs supporting the current proportional system is transversal and has more or less explicit supporters, from the Five Star Movement’s Giuseppe Conte to Mr Salvini, and the cordial entente between the two adversaries in the Senate may not be enough to break their ranks.

Gas or peace. Draghi’s arithmetics and Putin’s heel
What do Italians think of the war in Ukraine?