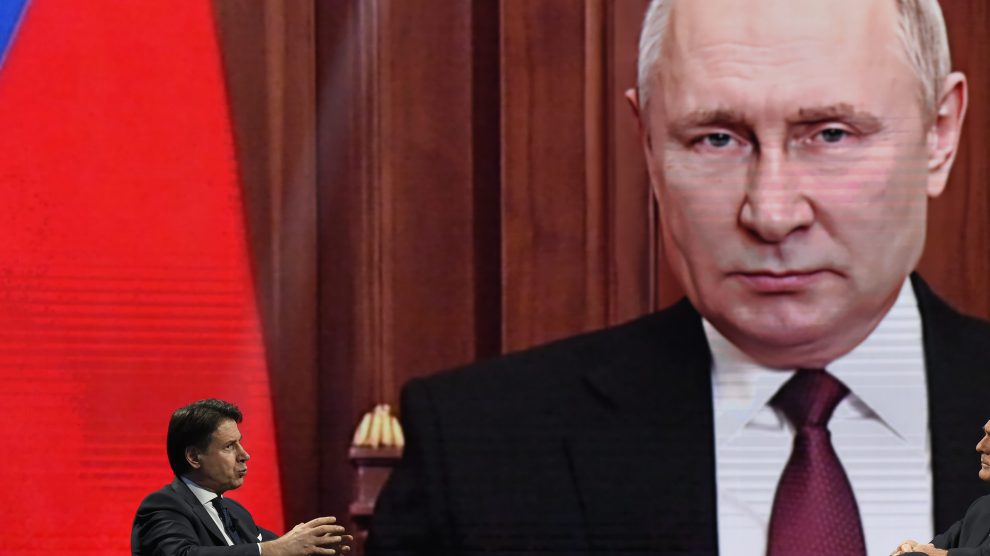 Russian disinformation has spread in the past, but now it’s increasing in intensity and scale. Moscow’s talking points are found across the Italian TV programmes and held onto by some politicians. Here’s a selection of the most outlandish ones

Is this the Russia Channel? In Italy, the switch from TeleBeijing to TeleMoscow was rather quick. As the war in Ukraine rages on, the Kremlin’s representation on Italian TV is comparatively outsized – not unlike the Chinese official line at the onset of the pandemic.

It’s political. In Italy, politics influences the TV agenda – and vice versa. What’s more, a section of Italian politics (which participates in the government coalition) does not despise Kremlin propaganda at all.

There’s a precedent. As the pandemic started in early 2020, the Kremlin sent soldiers to Italy under the pretext of “helping” the city of Bergamo against Covid. Today, Italian intelligence remarks it was an unprecedented espionage operation. But at the time, a large part of Italian TV was happily selling Moscow propaganda.

Today, it’s even worse. We have selected the top 3 Kremlin-propaganda-infused stories, opinions and interviews about the invasion in Ukraine that appeared on Italian TV.

1) The Mariupol mums. This aired on “Carta Bianca”, a public TV programme on RAI 3. Sociologist Alessandro Orsini – one of the most outspoken anti-weapons shipments in the Italian infosphere, who also believes that Italy should leave NATO if Russia attacked a NATO country – stated that he receives letters from “several mothers” in the Ukrainian city of Mariupol, who supposedly write that “you Italians have gone mad, giving us weapons”.

2) The Azovstal Steelworks map. It happened on Porta a Porta, the flagship programme on RAI 1, as well as Rete4 and La7. All showed an unpublished graph of the Azovstal Steelworks, housing the last pocket of Ukrainian resistance in Mariupol. However, the picture was a 3D rendering of a never-released board game, which was being used by Russian propaganda to denounce the presence of alleged US “biolabs” in Ukraine. It was circulated by the Russian political scientist Serghei Markov, an advisor to Mr Putin and a megaphone of Moscow propaganda. Only La7 issued a correction.

3) “We defend Ukrainians”. La7’s own flagship programme, Otto e Mezzo, hosted Russian journalist Nadana Fridrikhson from Zvezda TV (a channel close to the Russian Ministry of Defence) as a guest speaker. She stated that the most important thing for Russia is “the safety of its citizens in the Donbas and Crimea regions”.