Home » Why Draghi and Biden talked about Libya 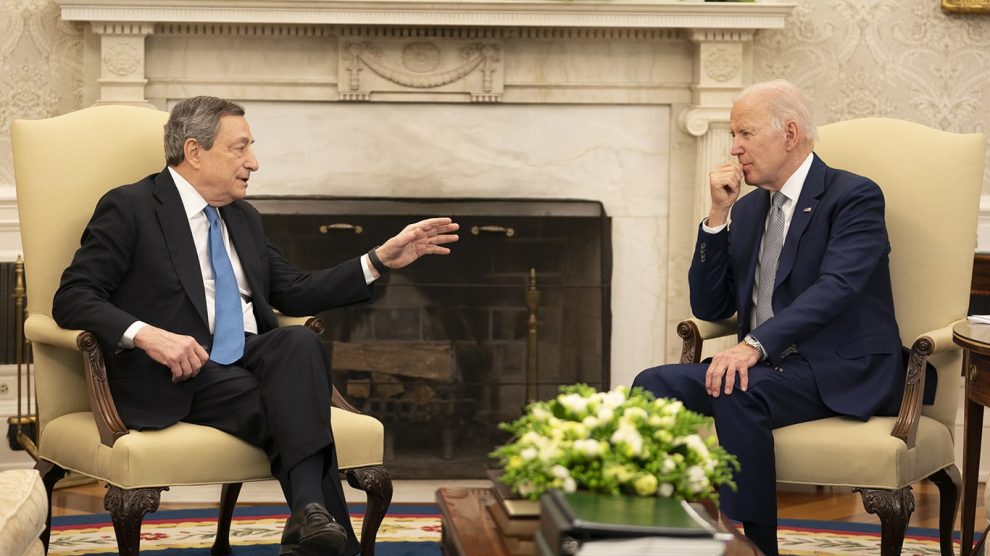 The Mediterranean country is still a sore issue for regional stability – and still deadlocked in a political crisis. Varvelli (ECFR) and Cristiani (IAI/GMF) explain why what happens in Libya massively impacts Europe and the West and why Washington should keep an eye on it

Libya entered the chat. During their meeting at the White House, Prime Minister Mario Draghi and President Joe Biden touched upon the Ukrainian crisis, its impacts on Europe and its vicinity, energy and suppliers. And that brought them to this exchange:

Mr Draghi: “Libya can be a huge supplier of gas and oil, not just for Italy but for all of Europe.”

Mr Biden: “What would you do?”

Mr Draghi: “We must work together to stabilise the country.”

That’s easier said than done, given that the war-torn country is locked in a political crisis that makes energy and industrial development rather tricky. Recently, the Italian ambassador to Libya, Giuseppe Buccino, and UN Special Envoy Stephanie Williams had a similar conversation.

The expert’s take, part 1. Arturo Varvelli – Senior Policy Fellow and director of the Rome office of the European Council on Foreign Relations – told Decode39 that Libya faces “a political impasse that no one seems to know how to unlock.”

The expert’s take, part 2. Dario Cristiani – Fellow of the Institute for International Affairs (IAI) and the German Marshall Fund (GMF) – noted that the US, European countries, and NATO’s primary focus is Ukraine. Still, PM Draghi chose to raise issues related to Libya and the so-called southern flank.

Still, Italy needs the US. Mr Varvelli believes that PM Draghi leveraged Russia’s presence in the wider Mediterranean and the urgency to diversify away from Russian gas to issue “a pre-emptive call for more political support for Italy within Mediterranean and energy issues.”