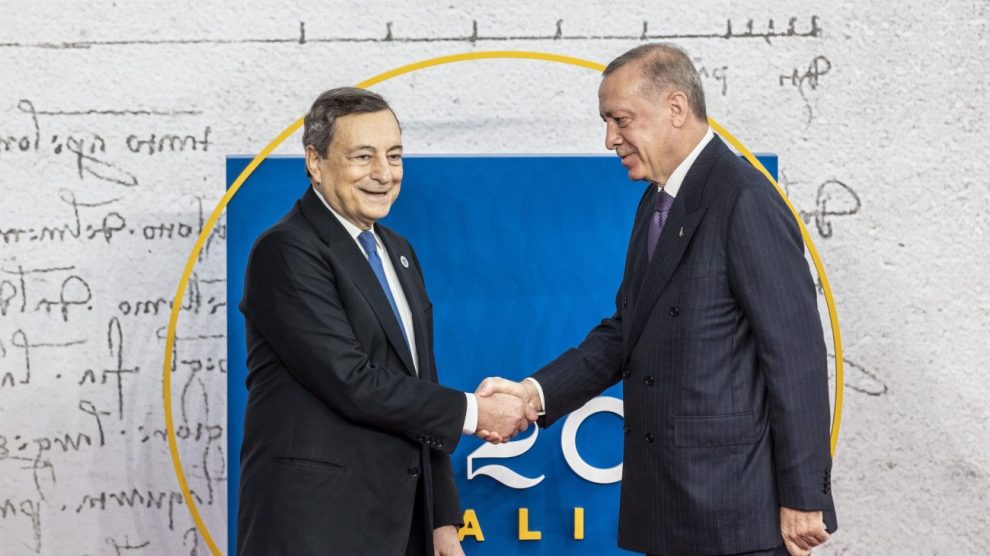 The Ankara summit. On Tuesday, Italian Prime Minister Mario Draghi landed in Ankara to meet with Turkish President Recep Tayyip Erdogan. The duo are slated to partake in an intergovernmental summit session, sign agreements and hold a joint press agreement.

Warming up to each other. It’s the first time in a decade a sitting Italian PM travels to Turkey for an official visit. The summit hints at Ankara and Rome’s willingness to improve their relationship – which had been frosty not too long ago.

It’s not just Italy. Zooming out, Mr Erdogan’s assertiveness on some issues over the past years often angered its allies. The latest episode entailed him throwing a wrench into Finland and Sweden’s NATO accession process. Nevertheless, Turkey’s geopolitical weight is unquestionable, which is part of the reason behind this deeper Italian, European and Western engagement.

It’s all about diplomacy – and realpolitik. Alessandro Politi, Director of the NATO Defense College Foundation, believes that the importance of dialogue is the overarching theme behind Mr Draghi’s visit.

Some key issues over which Ankara and Rome don’t always see eye to eye but must cooperate include the Libyan crisis, Russia, and energy.

About the NATO accession saga – which sees Mr Erdogan grappling with the decades-old Kurdish issue and his electorate along with Turkey’s weight in the Alliance –, the expert hopes for an internal “process of political maturation” that could bring Ankara to consider a different solution to the issue – not unlike how London is dealing with the Northern Ireland issue.

However, it’s not only about the Kurds: Mr Politi believes it also has to do with the Alliance’s internal arrangements.