Home » “Super Mario” awarded in NYC. His speech against autocracies 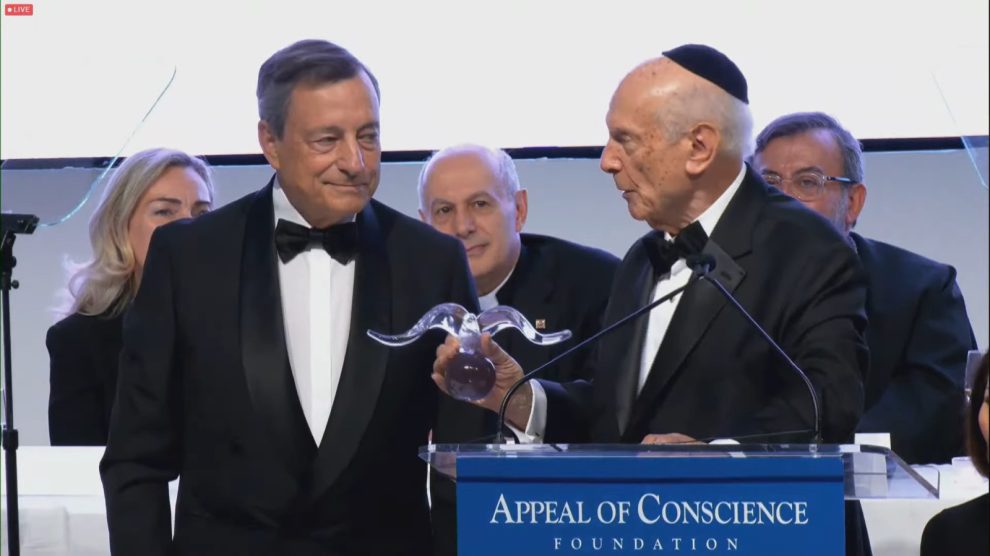 The Italian PM received the “World Statesman Award 2022” the night before speaking at the United Nations General Assembly. In his speech, he detailed his legacy – pursue dialogue and cooperation for peace, but stand strong against autocratic regimes hindering that vision – and was lavished with praise by the likes of President Biden, Kissinger and Blackstone’s Schwarzman

What a start to the New York trip. On Monday, the outgoing Italian Prime Minister Mario Draghi touched down on US soil and headed to the Appeal of Conscience Foundation, where he received the “World Statesman Award 2022.” His schedule is packed:

Back to the award, which was presented to PM Draghi by Rabbi Arthur Schneier “for his multifaceted leadership in finance and service to citizens that have benefited Italy and the European Union and helped international cooperation.” And the other speakers, too, joined in what became a unanimous chorus of friendship, esteem and support for Mr Draghi.

Roll call. Mariangela Zappia, Italy’s ambassador to the United States, and Cardinal Pietro Parolin, Secretary of State of the Holy See, were also in the room – along with Maurice Lévy, founder of the Publicis Group; Brian Thomas Moynihan, CEO of Bank of America; Ambassador John Negroponte, former Director of National Intelligence and US Deputy Secretary of State; John Elkann, CEO of Exor, and many more people from the economic and financial world in New York.

Mario Draghi’s own speech, on its part, focused on the need to foster dialogue to promote peace and cooperation. “The potential for mutual understanding to be a force for good is larger the more integrated our world [becomes],” he noted. However, the threat of autocracies –as exemplified by Russia’s invasion of Ukraine – hinders that very process, he said.

I am deeply grateful for receiving this award and I would like to thank Rabbi Schneier, the Appeal of Conscience Foundation and all of you for this honour.

You have awarded this prize to many great stateswomen and statesmen before me.

It is truly humbling to be in their company.

I would like to pay tribute to the late Shinzo Abe, who stood on this stage last year.

Abe was a strong believer in Japan’s duty to contribute to global stability.

He acted forcefully to reinvigorate the Japanese economy, through a combination of fiscal policy, monetary policy and supply-side reforms.

His life was tragically cut short, but his legacy lives on – among the people of Japan and beyond.

The importance of dialogue – which we celebrate tonight – has been squarely at the centre of my professional life as an economist and as a policymaker.

The value of a successful partnership between multilateral bodies and local institutions was one of the main lessons I learnt while working at the World Bank in the 1980s.

Rewriting the rules of global finance – as we did on the Financial Stability Board in the wake of the 2008 crisis – required mutual trust, open-mindedness and the ability to compromise.

The European project, which has granted peace and stability in Europe after centuries of conflicts, hinges on the strength of shared institutions such as the European Central Bank.

The G20, which Italy presided over last year, confirmed that only global cooperation can help to solve global problems from the pandemic to climate change.

The potential for mutual understanding to be a force for good is larger the more integrated our world [becomes].

To be successful for everyone, and especially the most vulnerable, globalisation demands a joint set of rules.

And yet, today we face a significant challenge to the idea that we can work together for the benefit of all countries.

Russia’s invasion of Ukraine risks ushering in a new age of polarisation – one we have not seen since the end of the Cold War.

The question of how we deal with autocracies will define our ability to shape our common future for many years to come.

The solution lies in a combination of frankness, coherence and engagement.

We must be clear and vocal about the founding values of our societies.

I am referring to our belief in democracy and the rule of law, our respect for human rights, our commitment to global solidarity.

These ideals should guide our foreign policy in a clear and predictable […] manner.

When we draw a red line, we must enforce it.

When we make a pledge, we must honour it.

Autocracies thrive on exploiting our hesitancy.

We should avoid ambiguity, not to regret it later.

Finally, we must be willing to cooperate, so long as it does not mean compromising on our core principles.

I hope there will be a future when Russia decides to return to the very norms it subscribed to in 1945.

For all the gloominess of the times we live in, I remain, well, cautiously optimistic about the future.

The European Union and the G7 – together with our allies – have remained firm and united in support of Ukraine, in spite of Moscow’s attempts to divide us.

Our collective quest for peace continues – as shown by the deal to unblock millions of tonnes of cereals from the ports on the Black Sea.

Only Ukraine can decide which peace is acceptable, but we must do all we can to favour an agreement when it finally becomes possible.

In a divided world, the role of religious leaders and of the institutions you lead is essential.

For all your differences, you champion peace, solidarity, human dignity.

Your knowledge, your wisdom and your faith can guide us and help us heal.

You can reach across borders, speak to our collective conscience and to the soul of individuals.

Your can show the way forward through dialogue – build new bridges where old ones have collapsed.

As I was reminded during my recent visit to Yad Vashem, indifference is the worst foe of humanity.

Speaking out is not only a moral obligation – it is a civic duty.

To those who demand silence, submission and obedience we must oppose the power of words – and, if need be, of deeds.

Italy will keep standing by the EU and NATO. Draghi’s UNGA speech
Why Biden’s Special Envoy for Hostages was in Vatican City