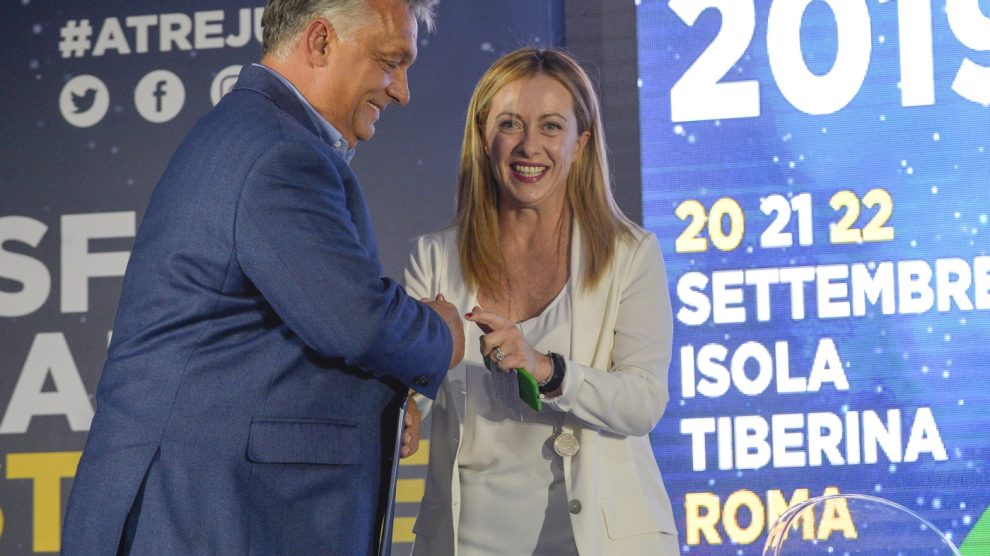 With Brussels freezing funding towards Hungary over corruption concerns, Giorgia Meloni and Matteo Salvini leapt to defend their ally, Viktor Orban, whereas Silvio Berlusconi stood by the EU. The internal contradiction exposes cracks in the leading coalition – and casts new doubts over Ms Meloni’s Atlanticist credentials

Brussels v Budapest. On Sunday, the European Commission proposed freezing roughly €7.5 billion of Hungary’s EU funding over corruption concerns. The long-awaited development came just days after the European Parliament had decided the country was no longer a full democracy – but rather an “electoral autocracy” – and marked an escalation in the yearslong rule-of-law tussle.

CC: Rome. With Italy a week away from voting, the issue is reverberating in the electoral campaign. Especially on the centre-right coalition – which is expected to easily win Sunday’s vote – since Matteo Salvini’s League and Giorgia Meloni’s Brothers of Italy stood by their historical ally, Hungarian PM Viktor Orban, by voting against the EP’s motion.

Salvini: no surprises there. The Hungarian PM “was freely re-elected by the Hungarian people,” said Mr Salvini, who’s a longstanding admirer. “It’s called democracy… and they’re supposed to love and respect the people’s will in Brussels.” He also remarked on his enthusiastic approval of Mr Orban’s policies, especially pro-family laws.

Meloni: justifying with unity. Ms Meloni, too, highlighted that the Hungarian PM had been chosen by the people, thus shrouding his illiberal slide in a veil of legitimacy. However, she cast her party’s choice as driven by the desire to bring European nations closer together rather than push them apart.

Berlusconi: the European trench. Forza Italia, on its part, reaffirmed its distance from Mr Orban’s line and membership of the European People’s Party. “We have always defended the rule of law, democracy and freedom,” said the party’s national coordinator, Antonio Tajani.

From euro-fringe to mainstream. The League and BoI’s choice to side with the illiberal leader has far-reaching implications, as both are members of the centre-right coalition that’s set to win Sunday’s vote and form Italy’s next government. Meaning that the Orban-style adversarial approach to the EU could become more pre-eminent thanks to Rome’s support.

Italexit is not in sight. “A right-wing government, with Brothers of Italy at its core, would reduce Italy’s influence in the EU and make Italy-EU relations more turbulent,” according to the Centre for European Reform, a think tank. And yet, argues the author, “Italy would not become a new Poland or Hungary.”

“Super Mario” awarded in NYC. His speech against autocracies
Draghi slams Conte and Salvini over weapons and sanctions