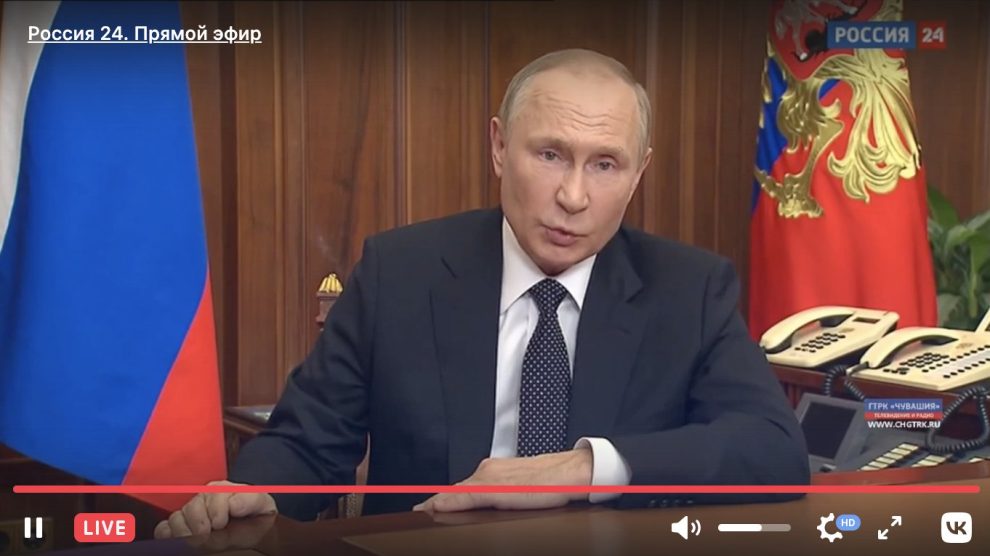 Like the undertaking of the “referenda” in the occupied regions, Vladimir Putin’s choice to escalate signals he’s willing to go all the way, without considering the repercussions on Russia’s present and future: an empire is worth a few thousand lives. An analysis by Professor Savino

This morning, in Moscow, Vladimir Putin announced a partial mobilisation, in a speech that took up the main points of the Kremlin’s rhetoric of the past months, with some terms that have become clichés in the public discourse of the Russian authorities.

Numbers-wise, the Russian army is encumbered by difficulties. Since February 24, it reckoned with Ukraine replenishing its forces with the country’s general mobilisation. Kyiv has pushed Moscow to a move that’s not quite what the Russian supporters of “total war” have been clamouring for some time, but which goes in that direction. Total mobilisation – repeatedly upheld in the face of Russia’s retreat, often with anger at the responsibilities of the army leadership and the official media – has not happened for the time being.

The partial mobilisation, proposed by the Ministry of Defence and in force as of today, only involves specific categories without geographical distinction. Those leaving for the front (or for the rear) will be Russian citizens who are reservists, have done their military service or have a military specialisation. Before departure, they will have to undergo further training, taking into account “the objectives of the special military operation.” According to initial estimates, this group comprises roughly two million citizens, whose mobilisation by territory will be decided by the MoD and managed by the regional administrations, to which the president appealed.

Once again, President Putin emphasised the atomic option in his speech. Since the conflict is with “the collective West” (another fashionable formula in Moscow, which Defence Minister Sergei Shoigu used too), and EU countries with the US “want to debilitate and dismember Russia” along with Kyiv, which is intent on “bringing the war to Russian soil,” a nuclear conflict remains in the order of things. “Those who are trying to blackmail us with nuclear weapons need to know that the compass rose can turn in their direction, too,” Putin said, clearly alluding to NATO’s symbol to reiterate his readiness to push the button.

The war enters a new phase, where the two parallel directions, the conflict with Kyiv and the challenge to the West, are now intersecting. The decision to resort to partial mobilisation might succeed in buffering possible protests and using personnel already trained in military life in an effort to field Russia’s numerical weight against the Ukrainian offensive. The claim of referenda in the occupied regions, the outcome of which seems a foregone conclusion, is a further sign of the will to go all the way without any consideration for the repercussions on Russia’s present and future. An empire is worth a few thousand lives.

Giovanni Savino, visiting professor at the University of Parma, teaches contemporary history and specialises in Russian nationalism. Having lived in Russia for the past 17 years, he fled shortly after the invasion.

After Putin’s escalation, Conte blames Zelensky (and looks back at Xi)
Italy will keep standing by the EU and NATO. Draghi’s UNGA speech