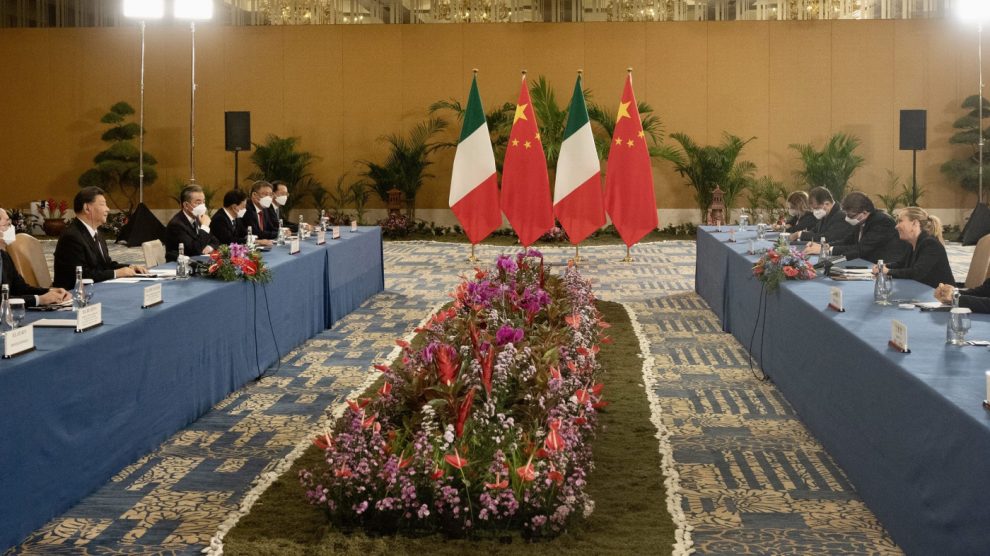 Rome’s ‘Italy First’ approach to China will not necessarily undermine the EU's strategy on the country. In fact, it could even strengthen it, as Francesca Ghiretti (ECFR/MERICS) pinpoints

During Italy’s general election campaign this year, the country’s future prime minister, Giorgia Meloni, signalled a strongly sceptical position on China. In an unusual move for a candidate for the premiership, she took part in an interview with Taiwan’s Central News Agency. She also promised a review of China’s global infrastructure investment programme, the Belt and Road Initiative (BRI), for which Italy signed a memorandum of understanding in 2019 – a decision she deems a “big mistake”.

Italy’s coalition government is made up of Meloni’s far-right Brothers of Italy, Matteo Salvini’s League, and Silvio Berlusconi’s Forza Italia. The three parties have a diverse track record of preferences towards China. In government, they have inflated their narratives (either for or against China) but then failed to follow through on their actions, which have tended to be much more in line with the approach of other European countries. Brothers of Italy is now governing for the first time, but for the moment it indeed appears to be acting much more moderately than it sounded on the campaign trail.

The first months of the new government have shown a high degree of continuity on China between Meloni’s administration and that of her predecessor. Mario Draghi adopted a position in keeping with the European Union’s assessment of the country as “an economic competitor and a systemic rival.” For example, it blocked or prevented the acquisition of Italian enterprises by Chinese companies and strengthened transatlantic alignment.

Meloni and Xi Jinping may have held a meeting on the sidelines of the G20 in Bali this year, but this means little for Italy’s wider overall policy approach. The meeting was friendlier than could have been expected for a European leader who just a few weeks earlier was vocally condemning Chinese actions in the Taiwan Strait. Meloni also accepted Xi’s invitation to visit Beijing. But this too is not a sign of Italy cosying up to China, but one of re-establishing a regular type of diplomatic relationship. Visits to China are hardly off the cards for European leaders: shortly before the Bali gathering, Germany’s chancellor, Olaf Scholz, became the first G7 leader to go to China since the outbreak of covid-19.

The same applies to another part of Meloni’s coalition. The new foreign minister, Antonio Tajani, is a Forza Italia nominee and comes from a China-sceptic background. In 2019, as president of the European Parliament, Tajani opposed Italy’s decision to sign the BRI memorandum of understanding. Shortly after the G20, Tajani had a phone call with China’s foreign minister, the content of which amounted to the usual diplomatic formulas around strengthening economic relations, but little more. The era of big deals and high-level signing ceremonies are long gone. Equally, there is little indication the Italian government will do anything to hamper the export to China of Italian goods.

The League’s policy on China has had its ups and downs, and then ups again. It was a League government in coalition with the populist Five Star Movement that put its name to the BRI in 2019 during a state visit accorded to Xi. Yet, just a few weeks before the signing, at the end of 2018, the League decided to distance itself from the BRI under pressure from Washington. As a result, Salvini did not attend the official events during the state visit and publicly lamented the fact that China is not a market economy. In July 2020, he protested outside the Chinese embassy in Rome in support of freedom for Hong Kongers. But the following year he then visited the Chinese ambassador in Rome in his capacity as party leader, officially to discuss the situation in Afghanistan. To this day, the League’s position on China remains unclear; it is likely to follow Brothers of Italy on China policy.

Italy was the first and only G7 country to join the BRI. With Meloni’s pledged review, it may be the first country to leave the initiative; this could trigger a process that leads other European states to do the same. In 2021, Lithuania became the first to quit the “17+1” cooperation format between China and central and eastern European countries. Others soon followed.

In the meantime, there remain the questions of how to deal with Chinese investments in Italian business. Stopping such deals is low-hanging fruit for the new government. After all, Draghi’s approach was highly protective of Italian assets, such as when he blocked Shenzhen Investment Holdings from acquiring the Italian semiconductor enterprise Lpe. Italy’s new, nationalistic prime minister is unlikely to be averse to making such choices. In a speech to the Italian senate, Meloni explicitly opposed predatory investments in strategically important Italian industry. Her “minister of enterprises and made in Italy”, formerly known as the minister of economic development, Adolfo Urso, has already stated the government’s intention to further strengthen the Italian screening mechanism for FDI to include new state assistance for Italian businesses hit by the decision to block certain transactions. He also hinted that the government may review deals involving Chinese investment that are already concluded.

In this regard, the Italian government may help strengthen the EU’s stance on China. The only caveat for EU policymakers is that the nationalist nature of the government means that it will not do so in a way that publicly cedes sovereignty or decision-making powers to EU institutions. For example, Italy is likely to favour stronger European mechanisms to screen investments, but not to accord more power to the European Commission.

China will remain secondary to the EU, the United States, and Italy’s immediate neighbourhood in Italian foreign policy. And it remains to be seen if Italy puts its money where its mouth is on China, above all, whether it does indeed conduct an early review of its participation in the BRI. But if Meloni’s government sticks to the positions she previously set out on China, Italy could more actively contribute to the shaping of a China strategy that prioritises both national interests and even EU interests too.

This article first appeared on the website of the European Council on Foreign Relations under the title: “Still a sceptic: How Italy’s new government could influence the EU’s approach to China”.

Francesca Ghiretti is an analyst at the Mercator Institute for China Studies (MERICS) and a current visiting fellow at ECFR in the context of the “European Caucus on China” project.