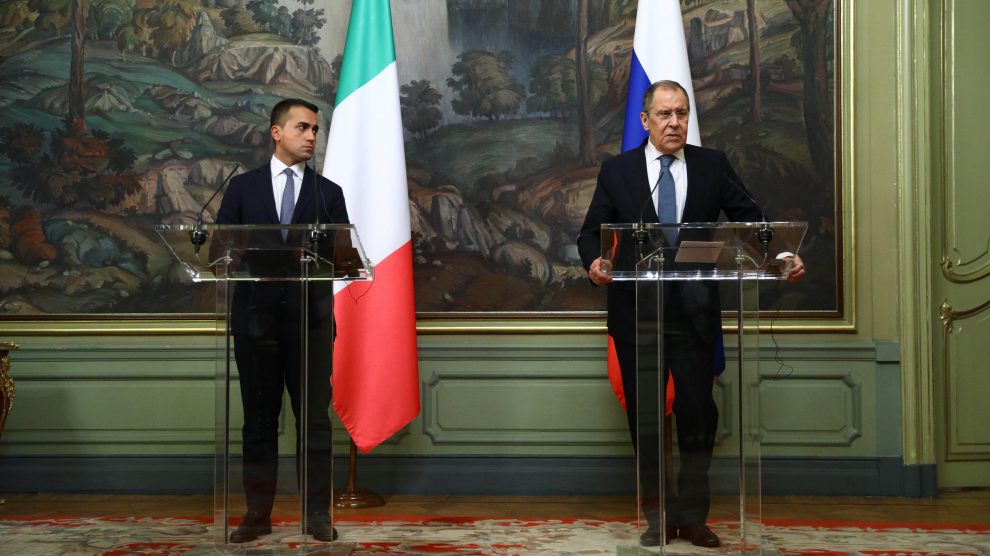 During his visit to Rome, the Kremlin’s Foreign Minister Lavrov highlighted that Russia is essentially uninterested in a G20-wide approach to the Afghan crisis. It comes down to Moscow’s differing interests and Italy’s Atlanticist positioning

Russia’s not in. During the presser that followed his talks with his Italian counterpart, Luigi Di Maio, the Kremlin’s Foreign Minister Sergey Lavrov appeared uninterested in sharing Italy’s drive to devise an approach to Afghanistan within the framework of the Group of Twenty.

The situation in Kabul is seriously precipitating ahead of the completion of the Western withdrawal, which is scheduled to end on August 31. Yesterday one blast near the capital’s international airport killed over 170, including 13 US military personnel. The attacks, carried out by the ISIS-K terrorist group, aggravated the country’s climate of instability.

In the past days, Italian Prime Minister Mario Draghi has been spearheading Rome’s effort to shift the diplomatic centre of gravity of the crisis within the G20. According to Sergio Fabbrini, Director of the Political Sciences Department at Rome’s Luiss University, the Anglo-American influence is counterbalanced by China and Russia in that international forum.

Mr Di Maio touched upon the Afghanistan matter during his talks with Mr Lavrov. After that, he used the presser to remind that Italy is acting as a mediating force by planning an extraordinary G20 meeting in September to mediate on the issue and come up with a truly international approach that could benefit from the Asiatic countries’ participation.

However, when Mr Lavrov spoke after Mr Di Maio, he did not prioritise the crisis in Kabul – as the latter had done – and began by speaking of tourism, commercial ties, cultural exchanges and vaccines. The diplomat hit back at his colleague’s remarks on Alexey Navalny and Crimes. Only then did he talk about Afghanistan.

When he did, he sought to put some distance between Rome and Moscow’s positions and spoke dubiously about a common effort. While he welcomed the Italian-led G20 approach, he said that “shared solutions are never simple.”

Then he spoke of Italy’s five-pronged approach to the Taliban by remarking that in Russia’s list, “terrorism is at the last place. Our priority is the security of our allies and of the bordering Southern states (such as Afghanistan, editor’s note) that are exposed to danger.”

Mr Lavrov’s visit to Rome was planned way back and originally intended to focus on the ties between the two countries. His remarks seemed to clarify that Italy, a firmly Atlanticist nation, was a partner rather than an ally, and that Rome’s invite to weigh in on the shared effort was welcome but kindly rejected.

The Kremlin’s distancing was not unforeseeable. According to Ambassador Marco Marsilli, former Director of Global Affairs and G8/G20 Proceedings at Italy’s Ministry of Foreign Affairs, one must “take into account the very nature of the G20, a forum where the search for shared solutions has never prevented national interests from being promoted and affirmed.”

“Moreover, any search for compromise is made extremely problematic, within the G20 context, by the heterogeneity of political situations and geographical locations, not to mention the framework of bilateral relations which is often very critical.”

Mr Marsilli remarked that Moscow, like Beijing, kept its Kabul embassy open, signalling its desire to maintain an open diplomatic dialogue with the new Taliban administration. Both countries might be set to benefit from the West’s diminished presence in the region (which gives way to their own) and enjoy close relations with several regional power brokers.

However, Russia is more wary of the risk that a new wave of Afghan-bred terrorism might destabilise the region, where the Kremlin has historically maintained a strong influence and several interests. Simply put, Russia cannot but take an interest in the crisis. Apparently, however, it won’t be within the G20.

Opportunities and challenges of an Afghanistan-centered G20
What if Biden won the long game? Charles Kupchan speaking