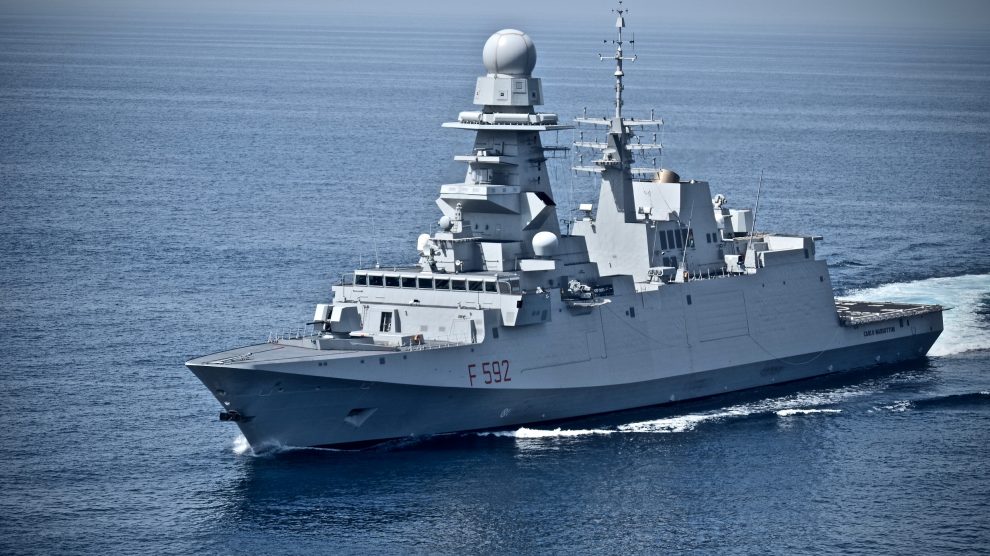 The region and its complexities, challenges and opportunities were portrayed at the European naval operation’s conference, where Rear Admiral Turchetto made his first official appearance as commander

The process by which the European Union works with (and for) Libya was agreed at the Berlin Conference in early 2020. It entails political, military, economic and humanitarian “pathways.” EUNAVFORMED IRINI is a component of such process, said Rear Admiral Stefano Turchetto, commander of the European naval operation.

He was speaking at the tenth edition of “Shared Awareness and De-confliction for the Mediterranean Sea” (Shade Med, 7-8 October), a conference organised by operation IRINI itself.

This was Rear Admiral Turchetto’s first public appearance after he succeeded another Italian, Admiral Fabio Agostini, at the operation’s command. “This process showcases the European Union’s truly holistic approach towards the solution of the long-standing conflict in Libya,” he said.

He then reminded that IRINI “operates right in the heart of the Mediterranean Sea” and its main task is to support the implementation of the United Nations arms embargo on Libya. The operation also contributes to countering illegal oil smuggling and human trafficking, and oversees the training of the Libyan Coast Guard and Navy.

“We work day by day to guarantee stability and security in the central Mediterranean, remaining impartial and neutral with respect to all parties involved in the Libyan conflict”, added the official.

The theme of this year’s conference was “Sharing security, culture and values ​​for a shared prosperity in the Med.” The goal was to encourage participants to carry out an in-depth reflection on what the region is experiencing.

“Sharing,” “dialogue” and “multilateral approach” are the keywords chosen by Ambassador Alessandro Minuto-Rizzo to describe the needs of the Mediterranean basin. They also detail the vision IRINI stands by, its commitment to a region riddled with new geopolitical vacuums – partly created by the United States’ disengagement.

“Geopolitics does not like gaps,” explained Umberto Profazio, an analyst at the International Institute for Strategic Studies. “We must understand that those spaces will be occupied, given the interest of powers such as Russia and China.”

Hence, Europe must be present. It must occupy one of its baseline geopolitical spaces. One could say that the macro-discourse on strategic autonomy is destined to fail without unique and effective EU policies for the Mediterranean area.

A cradle of the development of many civilisations over the centuries, the Mediterranean area remains a crucial trading hub while it continues to experience conflicts and differing forms of instability. At this juncture, the construction of a regional security architecture – mentioned by many among the panellists – is essential.

Striving towards stability and development

There are many unstable areas, ranging from Libya to the tensions in the East Med to the Sahel region. These issues were analysed by the EU’s Special Representative for the Sahel and former Italian Deputy Foreign Minister, Emanuela del Re.

She maintained that the Sahel “is Europe’s true frontier,” where phenomena of instability include statehood crises (such as those in Mali or Chad), armed militias (which are also affiliated with international terroristic organisations) and actors that are present in hybrid manners (such as the Russia deployments of the Wagner Group, or the expressions of Chinese soft power).

In that frontier, human and humanitarian aspects must come first, according to the new integrated European approach described by Ms Del Re. Vincent Cochetel, UNHCR special envoy for the Central Mediterranean, said that the aim must be that of building “together” a people-centred policy.

Stabilisation flows through these sectors, which the EU aims to catalyse, intervening on its challenges and its opportunities.

The role of energy and the ecological transition

The contemporary world is faced with rapid political and geopolitical changes, which are even faster in the economic and geo-economic sphere. Hence, the Mediterranean countries hold great opportunities in developing the energy sector, stressed Lapo Pistelli, Director of Public Affairs at ENI.

The discovery of new deposits of conventional raw materials has produced friction in the Eastern Med, but they never escalated precisely because of the mechanisms of contact and dialogue with which the EU is equipped.

The challenge of the energy transition is also sweeping through the basin, along with the flow of global decarbonisation. ‘Tis a land of complex challenge and great opportunity, which might spur the reinforcement of economic and social cooperation in the field of research and innovation to empower women and young people, support public-private partnerships and promote regional integration and job creation.

The full picture: what happened at the G20 summit on Afghanistan
Xi won’t be at G20, while Chinese disengagement impacts critical issues