Home » Everything you need to know about the Quirinal Treaty 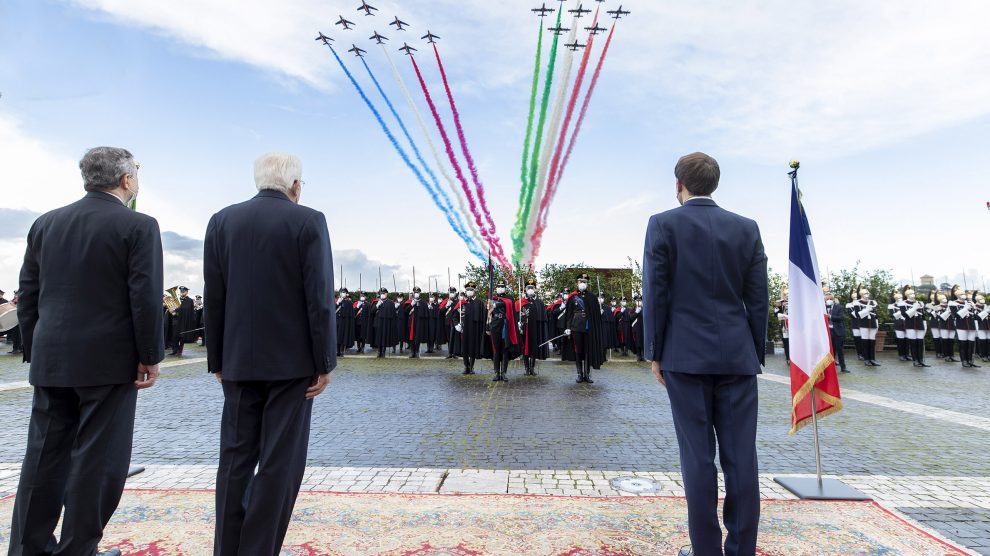 Italy and France signed a bilateral cooperation agreement in several strategic sectors ranging from defence, to research, to politics. After years of ups and downs, Mario Draghi consolidates the European axis with Emmanuel Macron

Starting today, said the Italian Prime Minister Mario Draghi on Friday morning, Italy and France “are even closer.” He spoke alongside French President Emmanuel Macron, under the watchful eye of Italian President Sergio Mattarella, as they signed the “Treaty between the French Republic and the Italian Republic for enhanced bilateral cooperation” – or Quirinal Treaty, as it’s known.

“Not having this Treaty was almost an anomaly,” quipped President Macron, who explained it “consecrates” relations between the two countries and opens a “new chapter for a Franco-Italian or Italian-French house” in which “we, our ministers, our economic worlds and our successors will be able to speak freely to each other,” animated by “common ambition for the European project.”

The document, which has been years in the making, provides an all-encompassing framework to strengthen all sorts of forms of political, diplomatic, academic and commercial collaboration between Paris and Rome. “The deepest sense of this Treaty is that our sovereignty, understood as our ability to direct the future, can only be strengthened through shared management of common challenges,” said PM Draghi.

This is a “historic moment in the relations between our two countries,” he added, stressing that “we share much more than borders,” the “same republican values, respect for human rights and Europeanism.” The pact is also geared towards “encouraging and accelerating the process of European integration” by means of “reviving investments, especially in strategic and innovative areas such as semiconductors; the digital and energy transition; the construction of a true European defence.”

How we got here

The Quirinal Treaty was first envisioned in 2017 when Paolo Gentiloni was Italian PM, and Emmanuel Macron spoke of deepening European integration. The diplomats set out to write the draft, but progress ground to a halt in early 2019, during Giuseppe Conte’s first government, when a diplomatic crisis ensued over some of its members’ support for the anti-Macron gilet jaunes movement.

Mr Conte’s second government brought about the distension of ties and reinvigorated the process. And under Mr Draghi’s leadership, Italy and France have grown increasingly close. What’s more, with the UK out of the EU and German Chancellor Angela Merkel about to end her sixteen-year leadership, the juncture seems suited to strengthen a Franco-Italian entente and increase both countries’ weight within the bloc.

According to Piero Fassino, Chairman of the Italian Lower House’s Foreign Affairs Committee, the Quirinal Treaty entails the “creat[ion of] a strategic alliance between two countries that have strong relationships and common interests,” given that “Italy is France’s second trading partner and the economic systems have a very strong degree of integration. There are as many Italian companies operating on the French market as there are French companies operating in Italy,” he told Decode39.

Mr Fassino also believes it can allow the two countries to overcome old misunderstandings. “Let’s be clear: it does not mean that from now on our respective positions will automatically coincide on all dossiers,” he cautioned, “but there is an advantage: every time there are divergences, we will have an instrument to direct them and find a common position.” The official quoted President Macron’s idea that Paris and Rome should see each other as complementary, adding that the Treaty “gives substance to this complementarity, providing for common understandings and actions in the many fields of common interests.”

Still, not everyone is as optimistic. “The partnership may be good, but the timing is not ideal” argued the Italian historian and economist Giulio Sapelli, who teaches at the Statale University in Milan, citing pending industrial issues. He also argued that, given the existence of the 1963 Elysee Treaty between Germany and France (which also acted as a blueprint for the Quirinal Treaty), Italy must counterbalance the European great power triangle with its own treaty with Germany “as soon as possible,” he told Decode39.

The Quirinal Treaty will have to be ratified by both the French and Italian Parliament. However, some believe that the institutional bodies should have been more central to the process. “Parliament must have the final say,” said Adolfo Urso, MP and President of COPASIR (the Italian Parliament’s intelligence oversight committee), lamenting the government’s failure to involve the latter. “Perhaps a prior interlocution would have been useful in the spirit of full and loyal cooperation between the State bodies.”