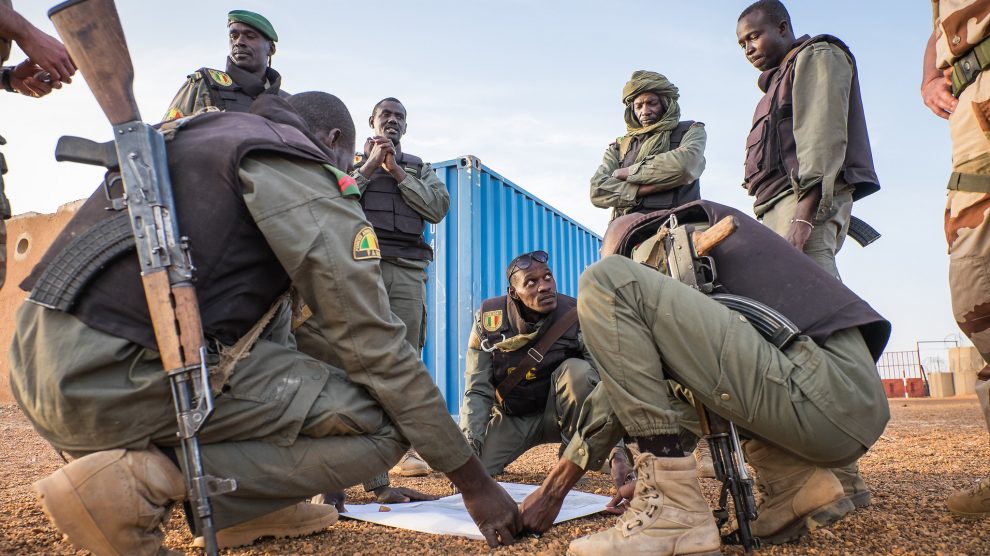 France is rethinking its approach to the Sahel region and counterterrorism initiatives, together with Italy and the EU, which are increasingly interested in the region. The Malian junta is growing closer to the Kremlin, eyeing Wagner Group mercenaries, which have been placed under sanctions by the EU and the US. Watch this space

One phase closes, another has yet to open. France is reducing its presence in Mali after nine years. On December 14, the French flag was lowered at the military base in Timbuktu. This changes the face of Operation Barkhane, which brought French troops to the African country in 2013 with a single mission: to fight jihadist terrorism.

Next Monday, French President Emmanuel Macron will fly to Bamako. He will meet interim President (i.e. head of the military junta) Assimi Goita for the first time, visit the French troops stationed in Gao and leave on Tuesday. In recent years, the French strategy in a region that has become central to the security of the whole of Europe is being profoundly revisioned, and Italy is heavily involved in the matter.

The official reason for the movement of troops from Timbuktu, says the French General Staff, is “a dissemination of jihadist terrorism in the [country’s] South and West”. This is the case with the Gulf of Guinea, where the “Support Group for Islam and Muslims” – the local version of Al-Qaeda – is radicated. But there are more reasons at play, and the consequences reverberate in Paris as well as in Rome. Here’s everything you need to know.

The first French soldiers arrived in Mali in 2013 with Operation SERVAL, authorised by UN Resolution 2085 in December 2012. The intervention had been requested by the Malian interim government to counter armed Islamist groups and to support government troops. Under the orders of former President Francois Hollande, Timbuktu was liberated from the jihadists by French troops in the same year. On August 1, 2014, Operation Barkhane began, with a contingent of 5,000 men stationed across the Sahel and headquarters in Chad’s capital, N’Djamena.

The Barkhane military will remain active in the so-called “three borders” area, between Mali, Niger and Burkina Fas, even if the contingent is scaled down to 2500 units by 2023. Jihadist terrorism maintains a strong presence in the area, and the French army still has three bases in Gossi, Gao and Ménaka. The “Sabre” task force against terrorism, staffed by the French special forces, remains active.

Meanwhile, Operation Takuba – a European mission in which Italy will play a leading role – is slated to take over. This French-led international mission aims to assist and train Mali’s armed forces. In addition to several European countries, Takuba will collaborate with US Africom and mission MINUSMA (United Nations Multidimensional Integrated Stabilisation Mission in Mali).

Where are Italian forces?

Italy is present in the Sahel region as an active part of Operation Takhuba. The first assets (helicopters for medical evacuation) arrived a few months ago. The maximum possible deployment as things stand amounts to 250 units and 44 land vehicles.

In Niger, Italy has been present since 2018 with the “Bilateral Support Mission,” for which a maximum deployment of 295 military personnel was authorised in 2020. In Mali, Italy participates in Minusma with a maximum of 7 units; in the non-combat mission EUTM Somalia (European Union Training Mission to contribute to the training of Somali security forces), whose training activities are temporarily suspended, with 14 units; and in EUCAP Sahel Mali (European Union Capacity Building Sahel Mali) with 16 units.

A golden moment for Russia

The withdrawal of French troops opens a highway for Russia in Mali. The ruling junta is intent on finalising a security and arms supply agreement with the Wagner Group, a Russian mercenary militia that’s active in several African countries, especially Libya, and the Middle East regions that are linked to the Kremlin.

Founded in 2014 by Dmitry Utkin, a former Russian intelligence officer (Crane), the militia now answers to Yevgeniy Prighozin, a Russian oligarch better known as “Putin’s chef” for his closeness to the president. According to the US, which together with the EU approved a package of sanctions against Wagner, the agreement “costs $10 million a month, diverting money that could be used to support Mali’s armed forces and public services,” the State Department said.

The commentary / 1: No political takeover in sight

Olivier Roy, an Islamologist, told Decode39 that “cooperation between the Malian government and the Russians will be limited to the arsenal. There will be no political takeover by Russia. The Russians do not have the means today to launch a new proxy war. They have done so in Syria, but Syria is closer and much more important for the Kremlin’s interest.”

The commentary / 2: But economic penetration is

Marco Di Liddo, senior analyst at the Centre for International Studies, told Decode39 that “the Russians have growing interests in Africa. In Mali they are following a strategy similar to the one they followed in Mozambique, Libya and the Central African Republic. They want to exploit the anti-French discontent within the population. Wagner will train Malian personnel, engage in combat activities against terrorists, protect the military junta. And above all, it will prepare the ground for systematic economic penetration. One of the key aims is to obtain commissions in the mining sector: gold, uranium and rare earths.”

Italy’s take on NATO’s next Strategic Concept
European corvettes on the horizon. The Naviris proposal