Home » What do Italians think of the war in Ukraine? 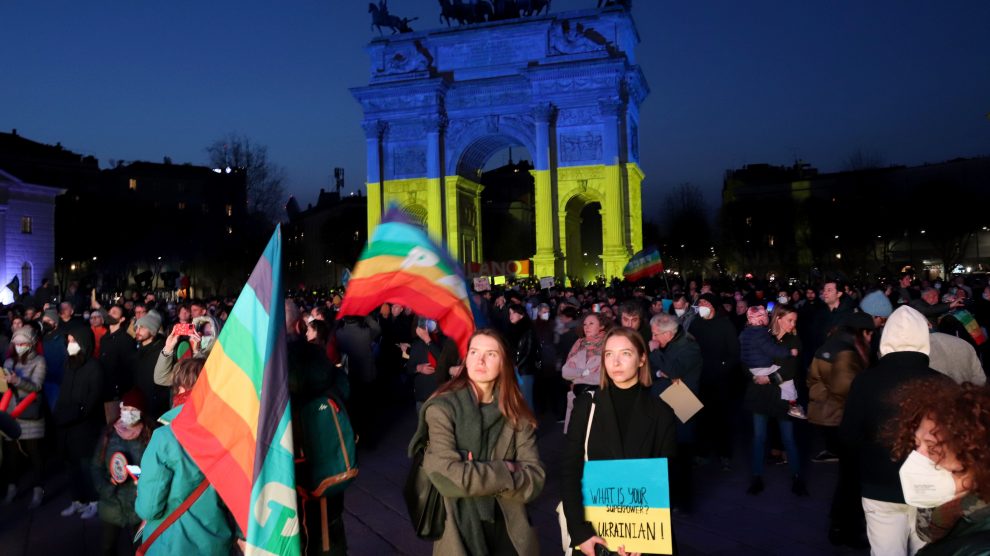 The ISPI poll reveals that most blame Putin and approve of sanctions, even more would welcome Ukrainian refugees and cut energy consumption to help. They also believe NATO should not actively intervene, and some draw the line at arming Kyiv

Since Russia invaded Ukraine, Italy and its institutions have generally acted in line with the rest of the West. Mario Draghi’s government staunchly supported Kyiv via direct means (logistical, economic and humanitarian assistance) and coordination with allies, including on sanctions. That was not a foregone conclusion, considering that the Atlanticism of sitting MPs had not been as clear-cut just a couple of years ago.

Nevertheless, despite the years-long cosiness between Vladimir Putin’s Russia and certain political parties – which, as Politico noted, translates into an “unusually large number of Italian politicians” opposing the arming of Ukraine and increasing military spending –, most of Italy’s politicians supported the pro-Ukraine and defence budget efforts.

The Italian population is largely of the same mind. One month and a half in, they have had time to wrap their heads around the war. The Italian Institute for International Political Studies (ISPI) set out to map their sentiment with a poll conducted via IPSOS. And the results confirm their support for the Western line, although more specific questions still unearth certain uneasy nuances.

First off, when asked who bears the main responsibility for the war, over 60% of respondents pointed to Mr Putin. A far smaller group (17%) says it doesn’t know, and an equivalent in size toes the pro-Russian propaganda line, believing it’s NATO’s fault. Incredibly, an additional 4.5% believe Ukrainian President Volodymyr Zelensky is to blame – bringing the “Russian party” to roughly 22%.

Secondly, a relative majority of Italians – 44% – are confident the war will end with a peace treaty. One-quarter of respondents couldn’t answer, while smaller groups – roughly 11, 10, and 9% – believe the conflict will be resolved through Ukraine’s surrender, a coup d’etat in Russia, and NATO’s military intervention, respectively.

An armed intervention, however, is another matter altogether. The people of Italy strongly feel that NATO should not intervene in any case, as 60% of respondents answered. One-fifth believes the Alliance should intervene militarily; another fifth doesn’t know. And when asked if Italy should send weapons to Ukraine, as it’s doing, an even split appeared: 38,6 disagreed, 37,7 agreed.

Sanctions on Russia are another touchy issue. 37% believe they hurt Italy’s economy and don’t help in solving the conflict, another 30% agree with the first statement and disagree with the latter, while 18% think they damage the Russian economy most. Still, a relative majority of 49% approve of them.

When asked about the energy issue, an overwhelming 86,6% stated they supported reducing their personal and their family’s consumption (the energy crunch and the high prices factor in this calculus). Even more exceptionally, many warmed up to “uncomfortable” energy sources: 58,5% support using more coal, while 51% would approve investments in nuclear – an incredible result for a historically atom-adverse country.

This tendency toward solidarity also seeped into the refugee issue: 85% of respondents supported welcoming Ukrainian refugees (44% unconditionally, 41% for a limited time). And when asked the final question regarding the risk of a nuclear escalation, seven in ten stated it is a “realistic” threat.

Letta-Meloni, the cordial entente (with an eye on the future)
Italy expels 30 Russian diplomats