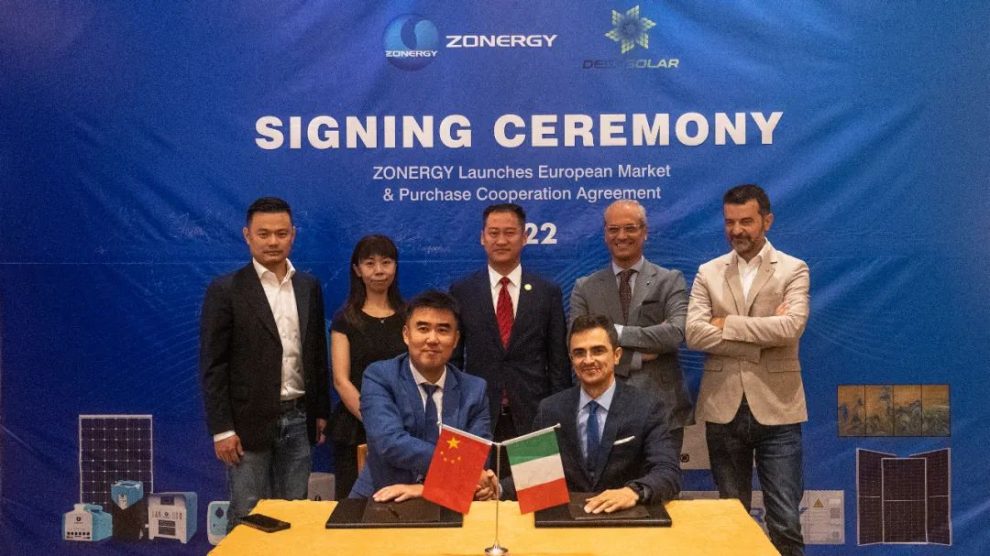 The operation is flanked by Chinese diplomacy, tied to the BRI and linked to the PV industry in Xinjiang. Here’s everything you need to know

Zonergy lands in Italy. The Chinese company, founded in 2007 by technology giant ZTE, is a leading supplier of renewable energy solutions specialising in smart microgrids. And on July 27 it opened a new office in Milan to expand its presence in Italy and Europe.

You guessed it – it’s the BRI. To distribute its products in Italy, Zonergy will work with the Italian company Desasolar under the coordination of the OBOR Group (an acronym for “One Belt One Road”, aka the belt and Road Initiative and the New Silk Road), which deals with import-export with China.

Chinese diplomacy is committed. Beyond Marco Bettin, director-general of the newly founded Italy China Council Foundation (an integration of the Italian-Chinese Chamber of Commerce and the Italy-China Foundation), a representative of the Chinese Consulate General in Milan attended the signing event.

Eyeing EU funds? In September 2021, Mr Liu declared that Chinese companies are “willing to take an active part in Italy’s National Recovery Plan”, which is bankrolled by EU cash, and explore “opportunities for cooperation in the sustainability, digital and health sectors.”

The issues: strategic dependence… A recent report by the International Energy Agency shed more light on China’s dominance of the solar PV industry, which has been boosted by decades of Western outsourcing.

…and human rights. Polysilicon, the primary material to build PV cells, is produced in Xinjiang, where the Chinese government – according to several countries and independent organisations – systematically tramples human rights and targets ethnic minorities. Zonergy, too, works in that area.

UPDATE, 01/09/2022 – the title and the contents of this article were amended to correct inaccuracies regarding the connection we drew between ZTE and Zonergy, as the former is no longer the latter’s shareholder since November 2021.