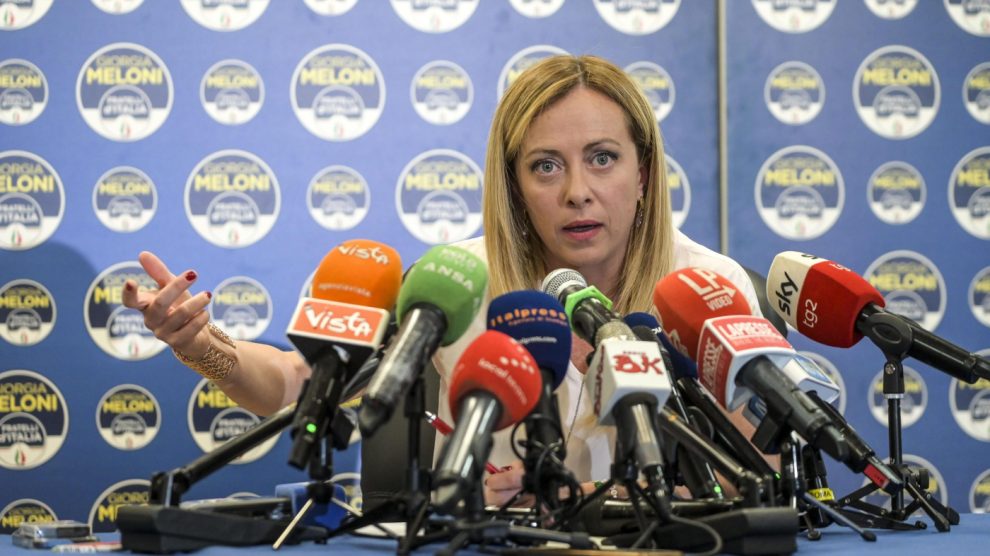 She sought to assuage international concerns over her political positioning, Europe and Italy’s future in a three-language video. It’s the latest leg of a years-long effort to transform her once-fringe party into a traditional conservative force; she touted “shared values” with the GOP, the Tories, and Likud

Not fascists. Giorgia Meloni, leader of Brothers of Italy and frontrunner in the Italian electoral race, is seeking to assuage concerns over her political positioning and her party’s post-fascist heritage. A point she’s keen to make, given the recent rise in international scrutiny over these very matters.

On fascism: “The Italian right has handed fascism over to history for decades now, unambiguously condemning the suppression of democracy and the ignominious anti-Jewish laws […] We fiercely oppose any anti-democratic drift with words of firmness that we do not always find in the Italian and European left.”

On the euro and the left: “I’ve been reading that [our electoral victory would be] a disaster, leading to an authoritarian turn, Italy’s departure from the euro and other nonsense of this sort. None of this is true,” she said, noting that the “powerful media circuit on the left” inspired these rumours to undermine her. She also promised not to jeopardise the roadmap – drawn by outgoing PM Mario Draghi – to access billions in EU funding.

On Ukraine and Italy’s role: “Our position in the Western camp is crystal clear, as we have demonstrated again by condemning, without ifs and buts, Russia’s brutal aggression against Ukraine, and by helping from the opposition to strengthen Italy’s position in European and international forums.”

On her political positioning: “For years, I have also had the honour of leading the European Conservative Party [which] shares values and experiences with the British Tories, the US Republicans and the Israeli Likud.”

The Italian reaction / 1. Ms Melon’s criticism of the left didn’t ring hollow to some.

The Italian reaction / 2. Nevertheless, some stains are harder to wash away, and some questioned the consistency between Ms Meloni’s words on fascism and the actions of Brothers of Italy’s ruling class.

The international outlook. The video is part of a years-long process of credential burnishing on behalf of Ms Meloni, which has accelerated dramatically due to the upcoming elections and her solid chances of becoming Italy’s next leader.

Euro-Atlanticism and boosting defence. The Italian centre-right agenda
From Atlanticism to the Constitution: the Italian Dems’ narrative shift