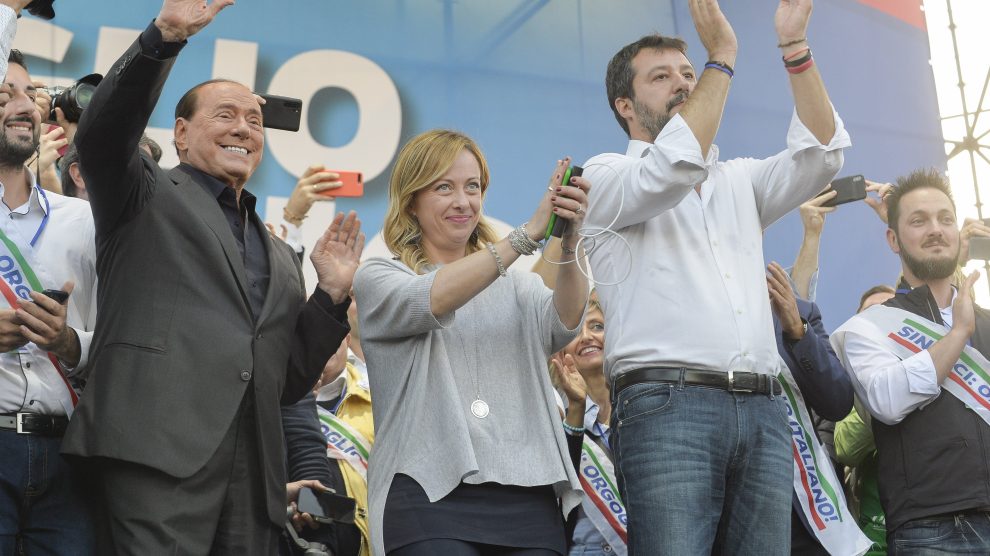 Polls see the union of these three parties as the most likely winners of the September elections. However, their internal differences on crucial matters (such as Ukraine) seeped into their governing programme as strategic ambiguity

The roadmap is out. As the September 25 elections draw nearer, the coalition of centre-right Italian parties has become the first to present their framework governing programme. The 15-point document (PDF) encapsulating their shared objectives was signed on Thursday by the leaders of the coalition: Silvio Berlusconi, Giorgia Meloni and Matteo Salvini.

Viable until it isn’t. This programme rests on a few assumptions: that the centre-right coalition will win enough seats to form a majority and form a government, and that the parties will reach a more comprehensive and fleshed-out governing agreement over the key points they diverge on, such as Ukraine (more below).

Here are a few takeaways.

Euro-Atlanticism and defence. The three leaders emphasised in the very first sentence that their government would be loyal to the European Union, the Atlantic Pact and the West, and would seek to reinforce them all – including through NATO-aligned defence spending and support to Ukraine in the face of the Russian invasion.

Infrastructure. The document underscores the coalition’s will to make “full use” of the resources of Italy’s EU-bankrolled Recovery Plan, although it also signals its revision to reflect the shifting priorities and conditions and renegotiate the EU’s Stability Pact. The leaders also vowed to reinforce national infrastructures of all sorts.

Institutional reforms. The coalition aims to establish a sort of semi-presidentialism by implementing the direct election of Italy’s president. It also seeks to increase federalism, reform the justice system, and deregulate and simplify public administration.

Taxes and work. The centre-right parties want to reduce the fiscal pressure on families, enterprises and autonomous workers while favouring the companies that hire through tax breaks. They also want to implement a flat tax and cut the tax wedge, aiming to preserve the families’ purchasing power while replacing the current citizen’s income “with more effective measures of social inclusion and active policies for training and job placement.”

Immigration and couples. The plan speaks of heightened border control measures and preventing the landings, in agreement with the North African authorities, to tackle the trafficking of human beings. There are references to setting up monitoring hotspots in departure countries and the social inclusion of lawful immigrants. There are also provisions to support young couples and increase the birth rate.

Economics and interference. Exploring Russian and Chinese influence in Italy
We’re not fascists. What Meloni, Italy’s likely next PM, said