Home » Salvini sides with Russia on sanctions, without allies 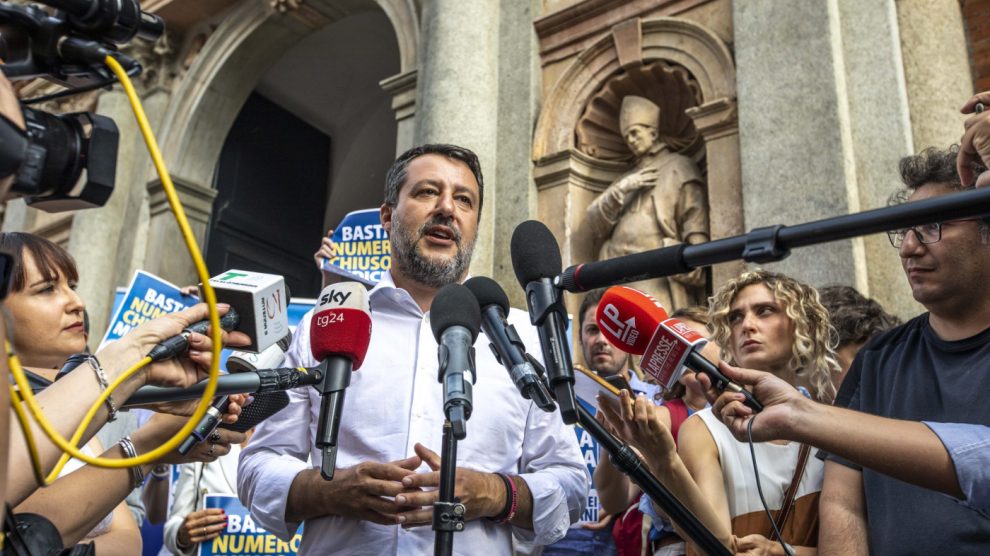 The leader of the League, which is expected to be part of Italy’s next government, is criticising the EU’s sanctions against Russia. Even at the risk of antagonising his allies, all of whom remain committed to the Euro-Atlantic front

The Kremlin overlooks Lake Como. On Sunday, Matteo Salvini attended the Ambrosetti Forum in Cernobbio – a recurring and influential event in Italian political life, offering politicians a chance to present and debate their plans in front of a business-minded audience. And there, he once again cast doubts on the efficacy of European sanctions on Russia, as he’s been doing for a while.

A lonely voice. By repeatedly expressing this position in the past days, Mr Salvini – who has a history of cosying up to Mr Putin – is also seeking to stand out in the ongoing electoral campaign. Even at the cost of fuelling tensions in the centre-right coalition, as all of its other members beg to differ.

Giorgia Meloni, the frontrunner in the electoral race and prospective leader of the centre-right, reiterated in front of the Cernobbio audience her party’s steadfast commitment to Ukraine and the necessity to uphold the Western sanctions on Russia.

“I believe that sanctions are inevitable, and we must continue to inflict them,” noted Antonio Tajani, who represented Silvio Berlusconi’s Forza Italia at the Ambrosetti Forum. “Any change of position can only be made at the European and NATO level.

Maurizio Lupi, leader of Noi Moderati, said that the EU “absolutely mustn’t” backtrack on sanctions, which are “just and necessary.” Instead, Brussels should help people and businesses to bear the consequences of the sanctions, he argued, adding that splitting the Western front would be “devastating” for Italy.

Standing out. To understand why Mr Salvini is sticking to his pro-Russian guns, one must consider several factors, including his desire to uphold a dualism with Ms Meloni within the centre-right coalition and his fear of losing votes to anti-establishment parties. According to the latest polls, the League has been overtaken by the Five Star Movement.

The left’s counterattack… Elsewhere in Italian politics, two key members of the Democratic Party – which heads the competing centre-left coalition – lambasted Mr Salvini for his stance on sanctions and his allies for enabling him.

… and the populist’s silence. The Five Star Movement refrained from engaging on the issue. This makes sense, considering their historical pro-Russian leaning. Much like Mr Salvini and the League, 5SM members generally oppose sanctions and sending military aid to Ukraine under the pretence of pacifism.