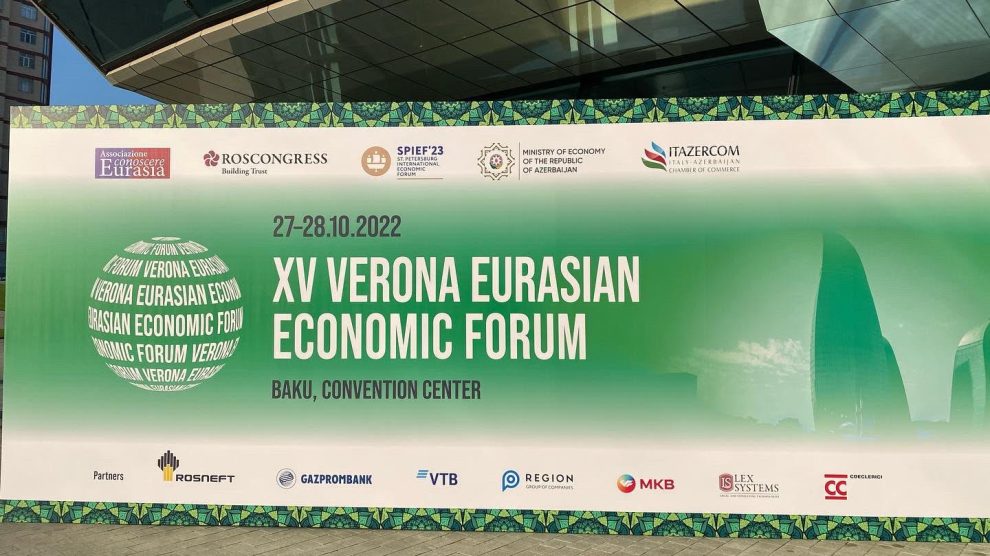 This year’s event is being held in the Azerbaijani capital to allow the presence of Kremlin loyalists. Rosneft’s Sechin hurled accusations at the US and the West – but he wasn’t the only one

Hardly on brand. Despite its name, the fifteenth edition of the Verona Eurasian Economic Forum (held in Baku, Azerbaijan) featured little talk of economic matters. The conference appeared to focus on condemning the European Union for sanctions against Russia and warning it that “it will be difficult to stabilise the energy market unless Russian gas returns to the market” – as noted by Leonid Mikhelson, President of Novatek, Russia’s second-largest natural gas producer.

More hot takes from the conference include Russian Deputy Minister of Foreign Affairs Alexander Grushko, who believes that “we are seeing the final phase of Europe’s energy suicide.” Sergey Razov, Russian Ambassador to Italy, was also present. As were more travellers from Italy…

From Rome with deference. The forum was not attended by any representative of the current Meloni government nor anyone from the previous Draghi government – thereby confirming Italy’s firm pro-Ukrainian political stance. Those few Italians present, however, were known pro-China and pro-Russia supporters.

Russia’s friends will be Russia’s friends. The official event organiser remains ‘Conoscere Eurasia Association,’ chaired by Antonio Fallico, President of Banca Intesa Russia and Honorary Consul of the Russian Federation in Verona. He stated that “Azerbaijan has had an MoU of cooperation partnership with the European Union since 1999” and reiterated the existence of a strategic energy partnership signed in July by the EU’s Commission President Ursula von der Leyen and Ilham Aliyev, the President of Azerbaijan”.

The bottom line. On its second day, the forum provided a platform for Russia and its supporters to protest against Western sanctions, including the exclusion from the international banking platform SWIFT, and to warn Europe of the energy consequences it faces unless these are removed.