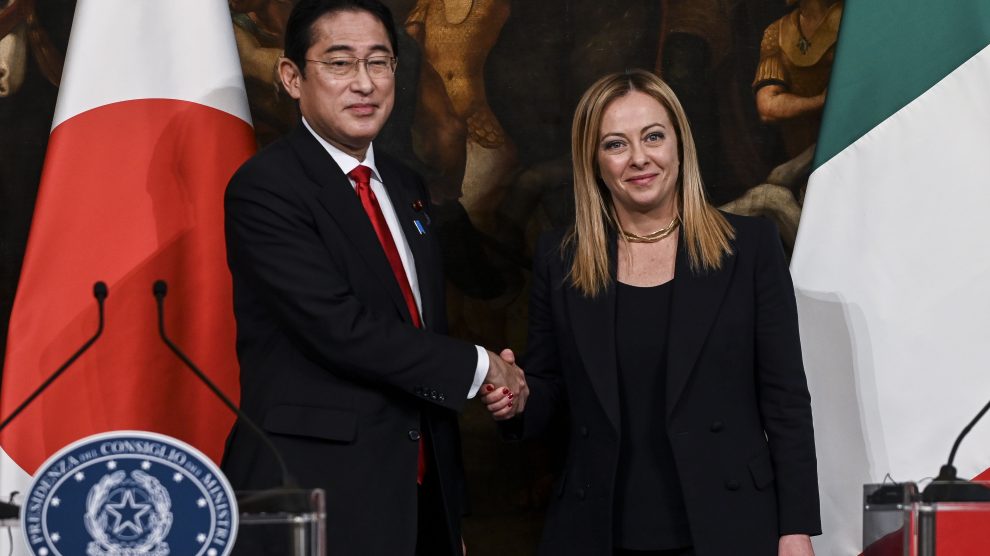 PM Meloni and PM Kishida announced a “significant step up” in the bilateral relationship. The jet fighter partnership launched last month “will have important spillover effects on productive sectors”, said the former, pushing to broaden ties in trade, investment, and R&D

Rome and Tokyo upgrade ties. Italian PM Giorgia Meloni and her Japanese counterpart Fumio Kishida agreed on Tuesday to the bilateral relations to a strategic partnership.

Warming up (for the G-7). Tuesday’s was the first bilateral between the two leaders since the November meeting on the sidelines of the G20 in Bali, Indonesia, was postponed after missiles fell in Poland amid the war in Ukraine.

Shifting perspectives (and better warplanes). The war highlighted that Euro-Atlantic and Indo-Pacific security is “indivisible,” as PM Kishida. He also appreciated Italy’s interest in the Indo-Pacific area and PM Meloni’s support for the new national security documents released last month.

Steeling industrial ties. Trade-wise, relations are strong: commerce between Italy and Japan, the world’s eighth- and third-largest economies, respectively, is worth over €12 billion. It’s also growing steadily and has ample space to develop in as-of-yet untapped sectors: green energy (notably solar PV and hydrogen) and infrastructure.

Bottom line: the G7 ministerial meetings may be the right opportunity to deepen relationships and consultations. Even though defence is not a G7 subject matter, diplomacies are already working on flying Defence Minister Guido Crosetto to Japan.

The gov’t majority is “granitic” in supporting Kyiv. Deputy FM Cirielli speaking
Why Rome is facing hurdles in delivering weapons to Kyiv