Home » Silk Ode: the pro-China distortions being squeezed out of Italy 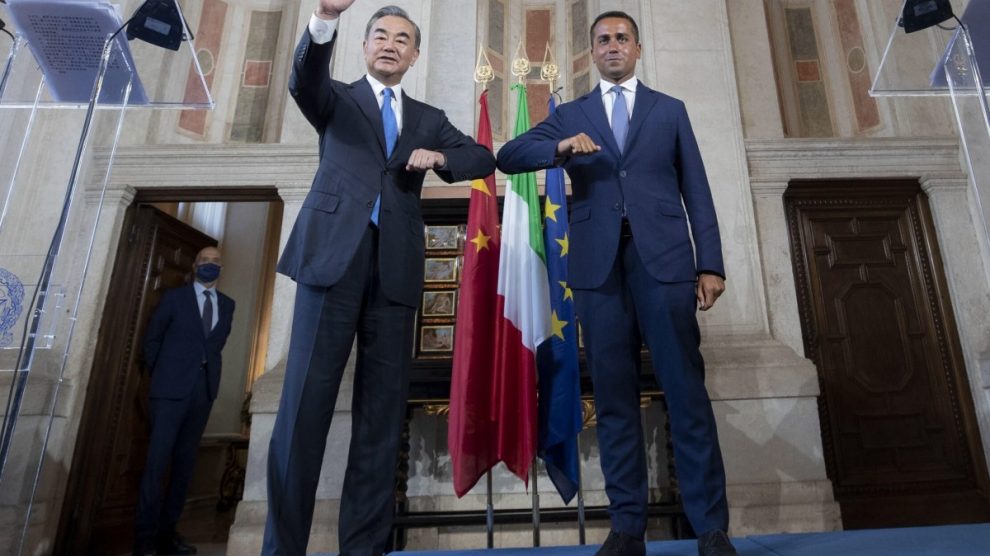 According to a Chinese readout of a call between foreign ministers, Italy supports the Silk Road. Except that was never mentioned

On Monday evening the Italian foreign minister Luigi Di Maio and his Chinese counterpart Wang Yi talked over the phone, a routine conversation that occurred at the latter’s request. However, the readouts of the call that emerged hours later from both sides differed by a substantial margin.

Crucially, the Chinese version reported Italy’s “hope to promote the construction of the ‘[New] Silk Road’ with China” (also known as the Belt and Road Initiative, BRI for short) – something that did not appear at all on the Italian side, which instead touched upon the issue of human rights in China (notably absent from the Chinese readout).

An institutional source revealed to our sister outlet Formiche.net that the matter of cooperation within the framework of the BRI had “never been mentioned” in the call. However, the Chinese version was widely diffused within the Chinese-leaning infosphere. Meaning that Beijing had decided to engage in foreign propaganda by distorting Italy’s official position.

The discrepancy is all the more significant considering that the Italian prime minister Mario Draghi – a strong proponent of Atlanticism – recently sought to put some distance between Rome and Beijing on the BRI by promising to “re-assess” Italy’s involvement in it.

In 2019 Italy became the only G7 country to enter the BRI by signing a memorandum of understanding with China. The global infrastructure development strategy includes massive investment schemes that carry the threat of economic colonisation (via debt burdening), and also act as a vehicle for China’s international influence.

Mr Draghi’s promise emerged at the G7 Summit in Cornwall, where leaders ended up agreeing on a strongly-worded statement calling out China over a series of issues, including unfair competition practices and human rights. The leader later stated that Italy “stands by” that communiqué.

His positioning reflects a shift in Italy’s positioning towards China, miles apart from the government responsible for signing the MoU in 2019. That executive was led by Giuseppe Conte and featured the anti-establishment Five Star Movement (5SM) as its senior coalition partner, which in turn acted as the main driving force for the strengthening of ties between Rome and Beijing.

Since then, the 5SM (now led by Mr Conte) has pivoted towards more moderate, institutionalised and Atlanticist positions, a process that culminated when its members agreed to enter the current government of national unity and do away with their most abrasive ideological edges. However, some diehard 5SM figures are still toeing the decidedly pro-China line.

These figures include the 5SM’s founding father, comedian Beppe Grillo, who today holds the position of party “guarantor”, who met with the Chinese ambassador to Italy Li Junhua in Rome even as the G7 leaders convened in Cornwall. Mr Grillo also hosted an article on his personal blog lambasting the G7 meeting and NATO and defending China, a practice which has been far from uncommon throughout the years.

Among the nostalgic 5SM members is senator Vito Petrocelli, president of the Foreign Affairs Committee in Parliament, who denies the existence of systemic human rights violations in China’s Xinjiang region (going as far as signing an unverified report casting doubts on the Western portrayal of the issue) and believes that “Italy must be the best reference for Russia, China and Iran in the West.”

Foreign minister Di Maio, who has been a leader of the 5SM, has taken care to distance the party’s position from Mr Grillo’s and Mr Petrocelli’s line. Following the G7 meeting he pointed out on live television that there must be “no ambiguity” on the fact that the Western alliance is a fixed point of Italy’s foreign policy.

Although his (and the government’s) line is undoubtedly shared by most 5SM members, the Italian political system is not rid of maverick Sinophiles. And, as shown time and again, China’s propagandistic system is all too eager to undermine the Western efforts to present a united front against its most unpalatable practices. Thankfully, these hardcore pro-Beijing promoters seem to have lost their appeal in the eyes of the Italians.