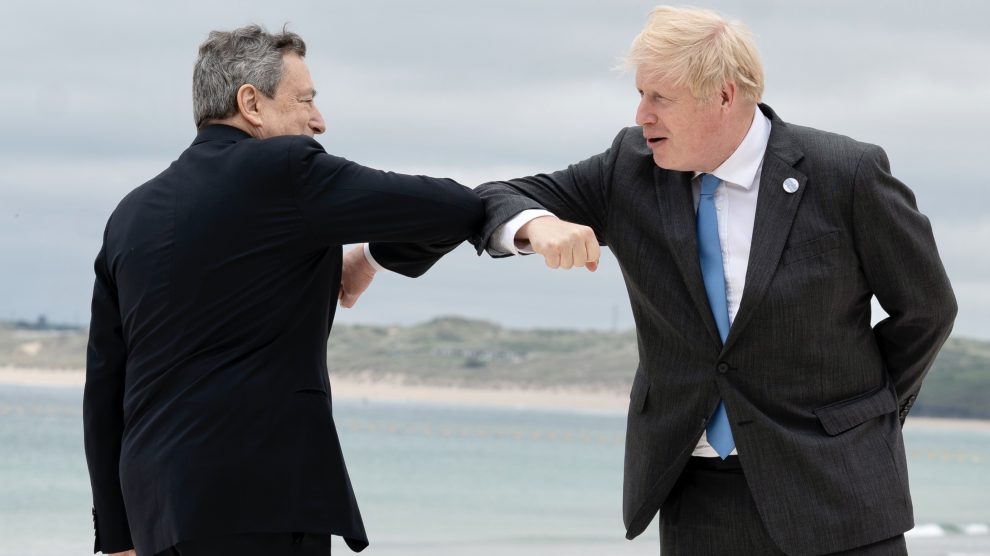 As this year’s chair of the Group of Seven (G7), the United Kingdom will lead Tuesday’s summit on Afghanistan. “It is vital that the international community works together to ensure safe evacuations, prevent a humanitarian crisis and support the Afghan people to secure the gains of the last 20 years,” tweeted Prime Minister Boris Johnson on Sunday evening.

Inevitably, as the few days allotted for evacuation runs out, G7 leaders will be eyeing the long game. Over the weekend, the UK’ State Secretary Dominic Raab laid out his country’s realpolitik-ridden approach to Afghanistan – and in doing so, he seemed to acknowledge that the influence of Western powers wouldn’t bring about a meaningful impact.

“We’re going to have to bring in countries with a potentially moderating influence like Russia and China, however uncomfortable that is,” he told The Sunday Telegraph. Working with a broad range of partners would allow the UK to exert a “moderating influence” on the Taliban-controlled nation.

Mr Raab’s approach carries a stark resemblance to the line adopted earlier last week by the Italian Prime Minister, Mario Draghi. The latter had already highlighted how resolving the Afghan crisis would have required a truly international collaboration, one that would take into account key regional actors – such as India, Saudi Arabia and Turkey – and international powers such as China and Russia.

As Italy holds the rotating presidency of the Group of Twenty (G20), which includes Russia and China, Rome’s alignment with London might just become the geopolitical game-changer, the driving force that would replace the United States’ now-tainted global standing in dealing with Afghanistan while also occupying part of the space that’s currently up for grabs by Beijing and Moscow.

Considering the two summit’s timescale, the entente between Italy and the UK could coalesce into a G7-wide approach, one that would be well-received by the likes of China, Russia and other G20 nations and ultimately have a better chance of actually turning into concrete, meaningful action.

In the past few days Italian Foreign Minister Luigi Di Maio confirmed the country’s will to convene an Afghanistan-focussed G20 summit in early October with “actors like Russia and China, countries like India” at the table, a “crucial part of the overall Afghanistan strategy”.

“We intend to extend this coordination to the main international players through the multilateral platform of the G20, which can offer a vital contribution to the international management of the new Afghan scenario,” added Mr Di Maio before mentioning the “intense diplomatic action” that he and Mr Draghi were undertaking to move in such direction.

Italy is already moving to prepare the ground for this manner of coordinated approach. On Thursday the Italian PM spoke over the phone with Russian President Vladimir Putin, and both supported “consolidating international efforts” on the matter. The Russian Foreign Minister Sergey Lavrov is also awaited in Rome later this week for a series of meetings at the highest level.

Furthermore, Mr Di Maio spoke with his Chinese counterpart Wang Yi. While the Italian FM underscored China’s “important role” to play in the Afghan crisis, Mr Wang stressed that “the future of Afghanistan should be decided by the Afghan people” (while also maintaining the importance of the international community).

China’s approach might end up being at odds with the one transpiring from Western authorities, which will most likely centre on the respect of the rule of law and human rights, two issues that Beijing has time and again put behind its national interests. Notably, the country’s position is also partly at odds with Russia’s, whose geopolitical aims must also be balanced with its preoccupation with regards to the migrant issue.

Nonetheless, in this fractious international climate, one would be amiss to disregard the fact that having these very different countries open to discussing a shared approach to an international crisis is of great importance (at the moment, the only comparable international platform are the forums on climate change).

Tuesday’s G7 meeting will help understand if the Italy-UK approach is indeed one and the same, and can be extended to the rest of the G7 with relative ease. If so, it could become the stepping stone for the G20 summit called for by Rome, which in turn could end up being the forum where the future of Afghanistan will ultimately be determined.

Why Afghanistan was not a defeat
Afghanistan: inside Italy’s effort for multilateral cooperation