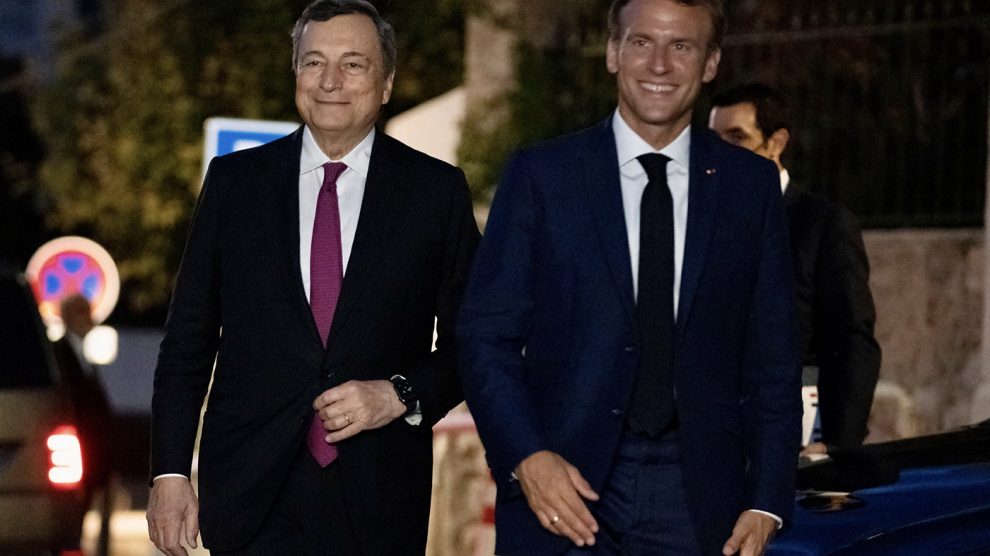 As the Germans build their next Parliament, converging instances mean that Paris and Rome have an increased chance to steer the EU’s direction - especially on key issues such as the Fiscal Compact

The election results are in, and it looks like Germany is about to enter a months-long period of intense negotiation, with Chancellor Angela Merkel’s placeholder hand on the rudder, until the composition of the next parliamentary coalition is agreed upon and the direction of Europe’s most powerful country is determined.

In the meantime, the European Union cannot, and will not, grind to a standstill. The 27’s agenda is cluttered with issues – such as European defence, the Green Deal and updating the bloc’s fiscal rules – as well as upcoming appointments, including (but not limited to) the EU-US Tech Council (the first meeting is scheduled for Wednesday in Pittsburgh).

It follows that the power vacuum left by Germany’s quasi-absence must be filled, lest the chaos of overlapping voices impede the creation of a unitary European position, both inside and outside the bloc. The other half of Europe’s Franco-German engine would be the next obvious choice, weren’t President Emmanuel Macron up for reelection, too (starting from April 2022) and somewhat weaker than Ms Merkel on the EU’s stage.

This leaves Mario Draghi’s Italy among the bigger European powers. The resurgent country “is poised to wield increasing influence over Europe’s internal affairs and its engagement with the world,” wrote Foreign Affairs, while underscoring the international weight of Mr Draghi’s character and credibility and the scope of the multi-year, sprawling €200 billion-plus recovery plan he’s currently overseeing.

Italy’s newfound authority – and the fact that Draghi commands a wide and solid parliamentary majority, making it unlikely he’ll depart office before the term’s natural end in 2023 – is not at odds with France’s general course. Unless the German consultations take up much less time than anticipated, the Paris-Rome entente will shape much of the EU’s upcoming decisions – and could evolve into something more.

Since 2018 the two capitals have been working on something that could counterbalance Berlin’s weight on the European plane: the Quirinal Treaty, a Franco-Italian alternative to the Élysée Treaty (which acted as the fundamental cornerstone of the Franco-German collaboration). Negotiations have been on again, off again, and then decisively rekindled by Mr Draghi in February, when he called for finalising the deal within 2021. So did Mr Macron in July, during President Sergio Mattarella’s visit to Paris.

Such an agreement could boost their vision of a more integrated Europe. Both are interested in building up Europe’s shared defence, improve the bloc’s immigration mechanisms and – crucially – revisiting the Fiscal Compact’s austerity-driven rules, which are currently suspended. Messrs Macron and Draghi are keenly aware that the return of the Compact could end up in the way of the bloc’s recovery and green transition efforts, long-term bets that require higher spending (and a way to finance the latter).

Berlin’s inclination towards austerity or solidarity will depend on the next coalition, and German electors did not give a clear indication of who Ms Merkel’s successor will be. Of the two possible chancellor-bearing parties, Olaf Scholz’s SPD is more open to going beyond Maastrich, whereas Armin Laschet’s CDU is closer to hawkish positions.

Then again, the presence of both Annalena Baerbock’s Greens and Christian Lindner’s Liberal Democrats (FDP) in the next coalition is virtually sure. And while their stances on the austerity-solidarity debate largely mirrors that of the SPD and CDU, the uber-hawk Mr Lindner has the highest chance of ending up in the Ministry of Finances, given that Ms Baerbock will likely want to oversee environmental and energetic affairs.

Predicting that Germany would not want to participate to this seminal discussion in a headless capacity, French Finance Minister Bruno Le Maire has been downplaying the chance of a new fiscal deal happening in the first six months of 2022, coinciding with France’s period as president of the EU.

Given that the bloc is set to re-adopt the old fiscal rules in 2023, the window of opportunity to rewrite them grows even narrower. However, as the year draws to a close, the Franco-Italian axis might have taken a more concrete shape. That in turn could easily embolden Paris and Rome to take action and shape the bloc’s fiscal direction notwithstanding – or perhaps in sync with – the next Bundestag.

G20 on Afghanistan to be held on October 12, says Draghi
Draghi calls Putin as Rome works towards Afghanistan-centred G20