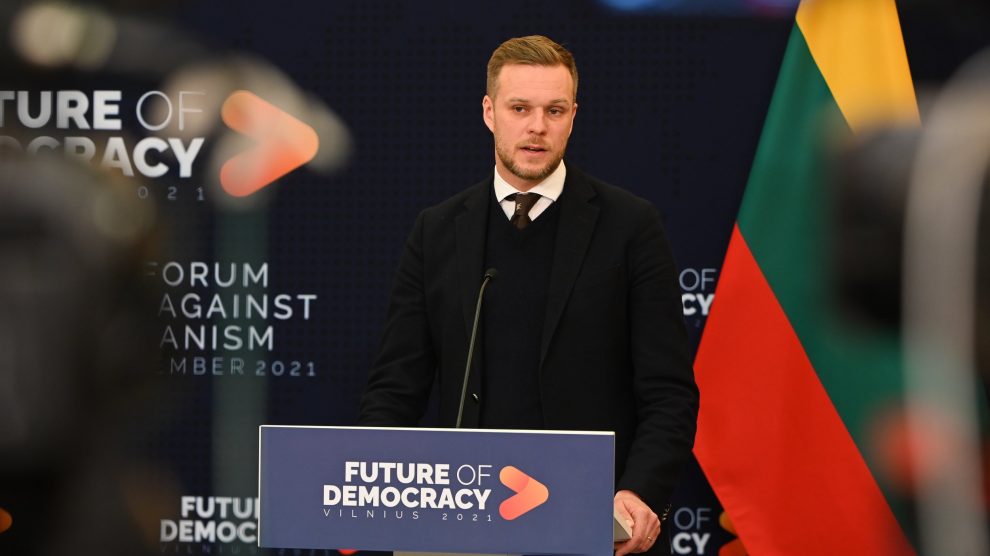 In this exclusive interview, Gabrielius Landsbergis gives three good reasons for developing relations with Taiwan despite Beijing’s harsh reaction and explains why Brussels must find ways to respond to economic coercion. On Russia, he calls on the Euro-Atlantic front not to give in to ultimatums

Gabrielius Landsbergis, 40, has been Lithuania’s foreign minister for just over one year. He has been the leader of the Patriotic Union, a conservative party belonging to the EPP family, for the past seven years. Politico nicknamed him “The Dragonslayer” and listed him among the 28 most influential people in Europe in 2022 – a ranking led by Italian Prime Minister Mario Draghi – for “leading the charge against China.”

With his hand on the rudder of diplomacy, the small Baltic state, a former Soviet republic, has abandoned the “17+1” – i.e. the format that China (the “+1”) had built with 17 Central and Eastern European countries. And he did so by inviting the European Union to coordinate more closely on China, whom through that very platform for dialogue had revealed its divide-and-conquer approach towards the 27 member States.

Lithuania’s green light to open a Taiwanese representative office in the capital Vilnius made the Chinese government even more nervous. In retaliation, Beijing recalled its ambassador to Lithuania and downgraded diplomatic relations. It also blocked imports to China and is currently pressuring companies like German auto parts giant Continental to stop using components made in Lithuania.

President Gitanas Nausėda has criticised the Lithuanian government’s decision. “I don’t think it was a mistake to open the Taiwan office, but I think the name was, [as] it wasn’t agreed with me,” he recently told Žinių radijas. But FM Landsbergis, as Politico pointed out, does not seem to be willing to let go.

“The Lithuanian government stands firmly by its decision to welcome the opening of the Taiwanese representative office,” he explained in response to questions from Decode39. “We look forward to developing our relations with Taiwan in the areas of business, science and technology, and culture,” he added, “[as well as] more contacts between Lithuanian and Taiwanese people who are bound together by common values, vibrant and open societies based on innovation.”

China is convinced that Lithuania is being manipulated by the US to provoke Taiwan. Mr Landsbergis’ answer is that he “would not even like to refer to this accusation directly, as it is as ungrounded as many other accusations we have heard from China lately.” Instead, he wants to highlight three good reasons for developing relations with Taiwan in a “changing world.”

The first is internal: the “strengthening of relations with Taiwan as a democratic space in today’s world, where many democracies are under pressure, was and remains an important element of our coalition agreement and part of the programme of the Government of Lithuania.”

The second is practical: Taiwan’s economy is “open,” “vibrant,” and “based on innovation, just like ours.” According to Mr Landsbergis, Lithuania sees itself catching up on a relationship it did not fully nurture in the past. “Many countries in Europe have long invested in such relations, and Lithuania simply wants to catch up on something we missed and ignored,” he says.

“We only want to do what the others have been doing, each within the One China Policy, to which we continue to adhere. And the question is: why has China allowed others to do this but wants to limit our right on this? Does that mean that China has changed? That China’s red lines have moved forward? But we can’t agree to China infringing on our sovereignty.”

The third is linked to the Indo-Pacific, an increasingly crucial area in global dynamics that’s of growing interest for the EU, too. “The Lithuanian Government has a clear and firm objective to diversify and intensify trade and economic cooperation with the countries of the Indo-Pacific region,” said the minister. “The development of cooperation with Taiwan goes absolutely in this direction.”

The defence of Lithuania from growing political pressure and economic coercion on the part of China is a priority for Joe Biden’s United States, which is trying to push allies and partners – including Italy – to Vilnius’ side. During a phone call with Lithuanian Prime Minister Ingrida Simonyte on December 21, Secretary of State Antony Blinken reiterated the US’ “commitment to work with like-minded countries to push back against the PRC’s coercive diplomatic and economic behaviour.”

“We have received tremendous support, not just from the US, but from many countries in the democratic world,” told us Mr Landsbergis. “Not just political support, but also a clear will to help our businesses. It is important, though, to translate this political support into the actions and policies that would not only prevent China or someone else from pressurising one concrete, small country, but would deter her from ever doing it again against anyone of us. It is in the interest of everybody, including Italy, everybody who holds dear the international rules of engagement.”

The minister, thus, is calling on the EU. The Commission is trying to steer clear of the Vilnius-Beijing dispute, even though in December it presented a proposal for an anti-coercion instrument that has China as its first, albeit implicit, target. “The EU needs to respond to coercion against Lithuania, not because it is an attack against Lithuania, but because it is an attack against the EU as a single market and single trading block, and even against global trade rules,” argues Mr Landsbergis.

He then evoked a term often used in Brussels when talking about trade with China: reciprocity. “The EU cannot have a balanced reciprocity-based relationship with China if we allow China to use its State-controlled businesses against ours for their political goals. We have means, and we need to create more instruments to respond to economic coercion against any member to safeguard the EU’s resilience and strategic autonomy.”

The concept behind the minister’s reasoning is simple: when the EU engages with a third country, it is “of crucial importance” that the outcome “makes us stronger, not weaker.” It is, as mentioned, the logic that led Vilnius to abandon the 17+1 platform.

“Of course, it is important to engage with China, but on terms that are beneficial to both sides and never create opportunities for the other side to pressurise us on something that amounts to the core of European values,” he argued. “If a big investment into a major media outlet in Europe would mean censorship and less freedom, if a book cannot be published in Europe that does not please a particular investor, if our people and institutions are silenced about human rights abuses, I would consider it a danger for Europe. And unfortunately, we have already seen some signs of it.”

But it’s not just China. On the Wall Street Journal, Tod Lindberg and Peter Rough, Senior Fellows at the Hudson Institute, described Lithuania as “the canary of world order.” Or, as they put it, China and Russia are “ganging up” against it “as they test US and EU resolve.” With regards to Russia, which maintains “an aggressive behaviour with the massing of troops along Ukraine’s border” while making “unacceptable demands” to exclude the possibility of Georgia and Ukraine joining NATO, “it must be stressed that no country has a veto right over the sovereign choices of independent states,” argues the minister.

“Russia also spreads false narratives that its national security is being threatened. Exactly the opposite is true – it is Russia who is intentionally destroying the European security architecture by encroaching on the sovereignty of others. One must not forget that Russia has annexed Ukraine’s Crimea and has occupational troops in eastern Ukraine, Abkhazia, South Ossetia, Transnistria.”

Mr Landsbergis’ recipe for dealing with Russia is similar to the one he invokes for China: “The Euro-Atlantic community must not give in to Russia’s ultimatums and make it very clear (as it has been doing in recent weeks) that Russia’s further aggression against Ukraine will have massive consequences, including restrictive measures,” he says.

Photo: Twitter profile of the Lithuanian Ministry of Foreign Affairs