Home » German-Italian “action plan” to be signed by mid-year 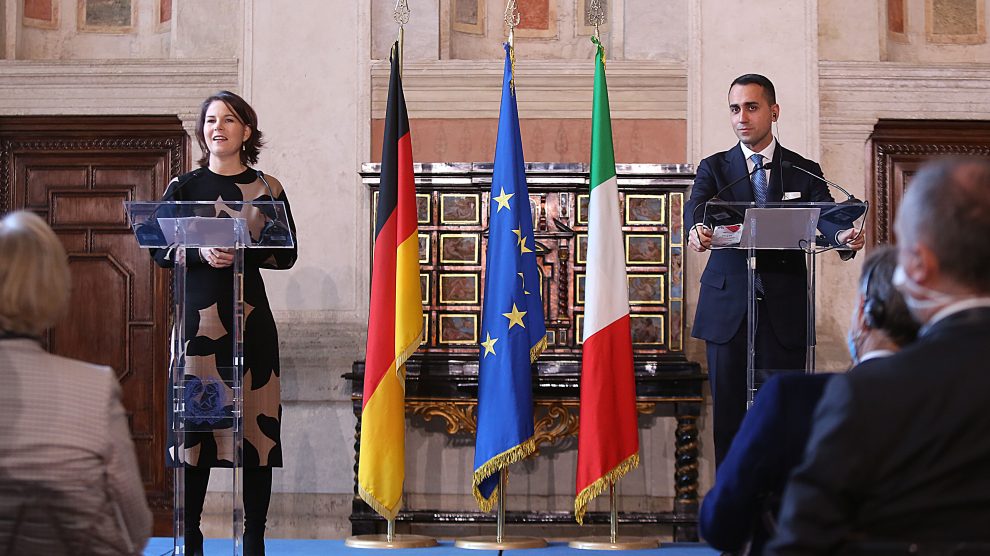 Foreign Ministers Baerbock and Di Maio foresee a formal pact that could complete the Paris-Berlin-Rome power triangle, starting with the green transition

Within the first half of 2022, Italy and Germany are poised to sign the “action plan” announced by Chancellor Olaf Scholz and Prime Minister Mario Draghi during their meeting right before Christmas.

Foreign Minister Luigi Di Maio reiterated as much as he started detailing the bilateral – and European – roadmap he imagined with his German colleague Annalena Baerbock, who is in Rome for a series of high-profile events.

“Minister Baerbock and I have given ourselves a timetable that looks ahead, towards mid-year, to organise the bilateral summit between Italy and Germany and sign the action plan on that occasion,” said the Italian FM at a presser following their meeting.

“The time is ripe to make this long friendship” between Italy and Germany “a strategic partnership,” he added. Both stressed the importance of “enhanced cooperation” between the two countries. Mr Di Maio indicated the fight against climate change and the green transition as two of the priorities shared by the two countries.

The two had already discussed strengthening cooperation on the sidelines of the G7 Foreign Ministers’ Meeting in Liverpool in mid-December. As Decode39 reported, the diplomatic bodies intend to complete the Paris-Rome-Berlin triangle following the Quirinal Treaty, which reinforced ties between Italy and France.

Ms Baerbock, leader of the German Greens (the second most powerful force in Chancellor Scholz’s coalition), stressed that the cooperation between Italy and its first trading partner is already “very close […] more than with other countries.” She highlighted the possibility of developing a kind of collaboration “not only between capitals” but “between citizens,” including through “town twinning.”

According to the German minister, strengthening cooperation between Italy and Germany will benefit the entire European Union. “I believe it’s important that Germany, Italy and France cooperate very closely,” she said in an interview with the Italian daily La Stampa before meeting with her Italian counterpart.

Both reiterated these concepts during an event in the afternoon, organised by the Italian Institute for International Affairs (IAI) and moderated by Director Nathalie Tocci, Honorary Professor at the University of Tübingen and “Pierre Keller” Visiting Professor at the Harvard Kennedy School.

Climate, migration, and the economy

Speaking with the press, Ms Baerbock emphasised cultural and economic cooperation and the fight against climate change as key drivers of a more robust collaboration. She also spoke of a “common vision” between Rome and Berlin on the issue of refugees.

“We cannot wait for all the 27 [member States] to come to an agreement,” she noted, acknowledging the needs of front-line countries such as Italy and Greece and that “the necessary counterpart to the free movement of people is a common migration policy […] I am pleased that on this matter Germany and Italy are working in the same direction.”

At the presser, Mr Di Maio’s words strengthened this stance. According to him, Italy and Germany share the need to enhance cooperation with third countries to manage the migratory phenomenon. Berlin is a crucial partner for Rome, including in the new negotiations at the EU level, to enforce the principle of solidarity and fair sharing of responsibilities, as it has “a balanced approach” to migration.

The nature of the pact

“It’s not about comparing treaties,” quipped Ms Baerbock when asked by Decode39 (during the event at IAI) how the “action pact” compared to the Aachen Treaty. “It only makes sense if we look at the chances, and maybe also the challenges, between our two countries.” Such challenges are “different between France and Germany and, obviously, Germany and Italy. And that’s good because otherwise we wouldn’t need bilateral treaties anyhow.”

The German FM pointed out that hers and Mr Di Maio’s understanding was that the upcoming pact “is not against anybody,” but rather looking at where the cooperation can make a difference and benefit Europe as such.

A take by IAI’s Alcaro

Riccardo Alcaro, research coordinator and head of the Global Actors Programme at IAI, welcomed the “action plan” ’s focus on the climate issue, and therefore energy, a subject on which the two countries have often had very different positions. However, as he told Decode39, he does not believe the balance resulting from the new entente will effectively shift the Franco-German axis.

“It’s not impossible that sooner or later we may arrive at an Italian-French-German triangle to replace the Franco-German [engine] as the main promoter of intra-European cooperation. Much will depend on Italy’s ability to exploit the Quirinal Treaty and the Action Plan with Germany, and also to manage its economy in a credible manner,” he noted.

“I don’t think Italy has the political and institutional capacity to reach this position, let alone in the short term. Unless Mario Draghi remains at the head of the government or, if he [becomes president], is able to direct a government action that reflects what we’ve seen during his first year in office, which has effectively [caused] Italy to recover a political weight and influence in intra-European cooperation not seen since the 1980s,” concluded the expert.

A newer kind of bridge

Shortly before the December meeting between the two heads of state, the German newspaper Frankfurter Allgemeine Zeitung had reported that Berlin was thinking of a “smaller” yet “more specific” agreement with Rome when compared to the one it signed with Paris.

Extensive bilateral friendship treaties are not part of Germany’s foreign policy culture, as German diplomats had told the newspaper. Moreover, Berlin would not want to jeopardise “the exclusivity of Franco-German relations” enshrined in the 2019 Aachen Treaty.

Nonetheless, a set of converging interests and favourable historical conditions – heightened by a series of views shared by Mr Draghi’s and Mr Scholz’s governments – have definitely built up political momentum for stronger relations.

For its part, Italy can count on two key figures in managing the relationship. One is Ambassador Armando Varricchio, formerly posted to Washington – which speaks volumes of the Euro-Atlantic positioning sought by Rome – and currently working in Berlin. He succeeded Luigi Mattiolo, another pillar of the well-developed relations between the two countries, who today sits alongside PM Draghi as a diplomatic advisor.