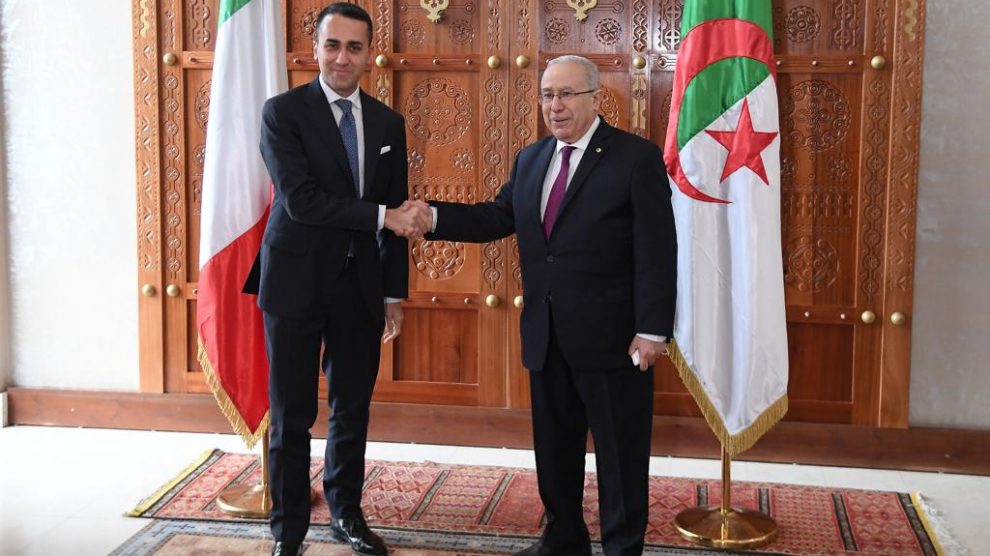 FM Di Maio travelled to the African country to strengthen energy cooperation, in light of the conflict in Ukraine, and replenish supplies ahead of next autumn. Along with him was Eni’s CEO Descalzi. The country is optimistic about increasing gas flows from other sources, too

The Italian government’s hunt for natural gas began on Monday in Algeria, as the war in Ukraine and the wider clash between the West and Russia escalated. Foreign Minister Luigi Di Maio was in Algiers together with Claudio Descalzi, CEO of the Italian energy major Eni, and a representative of the Ministry for Ecological Transition.

The objective, as the Italian Ministry of Foreign Affairs explained, was to strengthen cooperation in the energy field in light of the conflict in Ukraine. Meanwhile, Ecological Transition Minister Roberto Cingolani was in Brussels for an extraordinary European Council of Energy Ministers.

The Italian government is working to kickstart the construction of renewable energy plants by simplifying bureaucratic procedures. Another objective is to “increase flows from gas pipelines that are not fully loaded, such as the [Trans Atlantic Pipeline] from Azerbaijan, TransMed from Algeria and Tunisia, and GreenStream from Libya,” Prime Minister Mario Draghi told the Chamber of Deputies last week.

“The government is committed to tackling any effect of the sanctions against Russia with the utmost determination, and today’s visit to Algiers is clear evidence that we will not lose a single moment in doing so,” Di Maio told the press after meeting his Algerian counterpart, Ramtane Lamamra.

Russian gas is still flowing regularly and on par with the leves of the past few days. Still, better not to be caught unprepared by a possible interruption in Gazprom’s supply. Italy must be able to weather a possible shortage of 33 yearly billion cubic metres (bcm).

The starting point, therefore, is Algeria, source of a third of Italy’s gas and second-biggest supplier, after Russia. Algerian state-owned hydrocarbons giant Sonatrach is ready to supply more gas to Europe in the event of a drop in Russian exports as a result of the Ukrainian crisis, channelling it through the TransMed pipeline linking Algeria to Italy, CEO Toufik Hakkaha told the daily Liberté on the eve of Di Maio and Descalzi’s mission.

For Italy, Algeria is central, also given the instability of Libya, although Italy mostly speaks the language of black gold – oil – with the latter. A few weeks ago, when interviewed by Formiche.net, the Italian ambassador to Algiers Giovanni Pugliese called the energy relationship between the two countries “strategic” as it “has been for several decades.”

“Gas is the least polluting hydrocarbon,” said the diplomat, adding that the fossil fuel would continue playing a key role in the energy transition “for at least 20 to 30 more years […] Eni is also developing a collaboration with Algeria for the development of renewable energy.”

In addition to the Algerian-Italian TransMed duct, Italy can also rely on the Trans Atlantic Pipeline, TAP, which brings methane from Azerbaijan to Apulia, and from there to the rest of Europe. “We are negotiating with the government in Baku on the possible doubling of supplies,” explained Undersecretary Di Stefano.

Technicians believe both pipelines can handle the increase, and even doubling, of the flow rate. The same applies to the national network, operated by Snam.

The third source is GreenStream, connecting Libya and Italy. But post-Muammar Gaddafi Libya is still a battleground between clans, and Russia itself is involved through Wagner group mercenaries. However, Italian diplomats are optimistic about the future of energy supplies from Libya.

In addition to these three pipes, there is also liquefied natural gas (LNG) from the United States and Qatar. Japan promised to help, too, and Italy also plans on increasing national production. Also, the government decided that electricity producers (such as Enel, A2A) may differentiate between fossil sources “in case of emergency”. This follows on from PM Draghi’s statement, which did not rule out greater recourse to coal in case of need.

The country is confident its gas supplies and reserves will be enough – at least until next winter. Spring is just around the corner, operators are filling the storages (at 38.5%, fuller than the European average of 29.7%), current demand is low.

Italy is far from an alarming level on gas supplies: the state of pre-alarm it declared is, as with the cold winter of 2017, a precautionary measure that initiates “a constant monitoring of the national energy situation” and “an early filling of storage” compared to what normally happens from late spring, explained sources at the Ministry of Ecological Transition, which aims to fill up the stocks to avoid difficulties in the autumn.

There is, however, an open question, experts explained: regasifiers. Italy has a limited regasification capacity, with only three plants (in Panigaglia, Rovigo and Livorno). For this reason, PM Draghi asked the country and MPs to “reflect,” while Minister Cingolani spoke of the possibility of resorting to floating terminals.

How transatlantic efforts can support North Africa
Not so Russian anymore: Italy closes ranks with Western allies over Ukraine