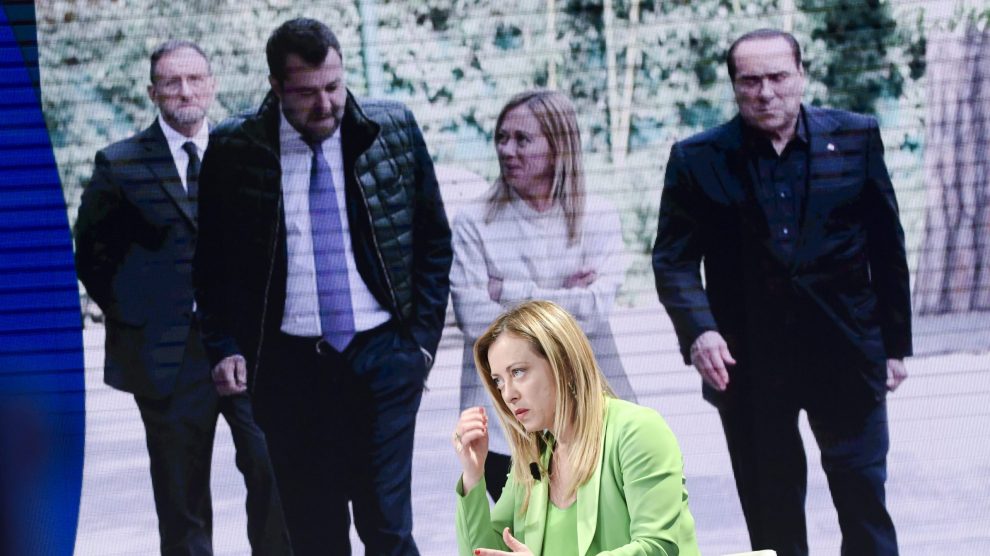 The Russian invasion of Ukraine is forcing a strategic realignment within the Italian centre-right coalition, its leaders and parties. And while Giorgia Meloni is successfully burnishing her Atlanticist credentials, Matteo Salvini and Silvio Berlusconi are struggling to extricate themselves from past positions

Vladimir Putin? Never heard of him. While the war flares up in Ukraine and the Russian invasion proceeds towards Kyiv, the Italian centre-right coalition is coming to terms with a syndrome that is quite common in Italian politics: amnesia.

The Russian president and his country have long been a fixed reference point for the Italian right for many years, as is the case with many other European conservative parties. Seemingly, a paradox: political forces born on strong, unfailing anti-communism stances that sympathise with the former Soviet Union. But Italy and the rest of Europe beg to differ.

Let us be clear: those familiar with Italian politics know that no party, not even the so-called “moderates,” can boast the label of “antagonist” of Putin’s system in Moscow. The Russian autocratic leader has always found open channels in Rome, regardless of the government in office.

However, President Putin’s strong opposition to the neo-liberal system and to Western globalisation has served the anti-establishment right-wing forces well. Repeatedly, over the years. Today, however, Russia’s military invasion of Ukraine and the shelling of civilians make it difficult, or rather impossible, to still defend the Russian cause.

It is no coincidence that most of the Italian conservative parties are undergoing a great strategic repositioning. The most amazing, though not really unpredictable, is that of Brothers of Italy, the right-wing party led by Giorgia Meloni that has been soaring towards the top of Italian polls for months.

“It’s time for field choices,” said the leader in the aftermath of the Russian invasion, calling Mr Putin’s attack “unacceptable […] The West and the international community are united in fielding every useful measure to support Kyiv and the respect of international law,” she added.

On Tuesday, Ms Meloni and her party – the only major political force in the opposition of Mario Draghi’s government – voted in favour of a resolution to send lethal weapons to the Ukrainian government, which was approved by an almost unanimous vote in Parliament.

Over the last few days she also reiterated her condemnation of Russian aggression at the Conservative Political Action Conference (CPAC) in Florida, the yearly kermesse attended by the élite of American and European conservatives. The former president of the United States Donald Trump spoke after her.

Brothers of Italy’s clear pro-NATO stance marks a change of pace compared to the recent past. The party was initially based on anti-system and anti-establishment positions. Perhaps this was a strategic move ahead of the 2023 elections, where the Italian right-wing coalition hopes to gain a majority and win over the government.

As written by the influential journalist Marcello Sorgi, Ms Meloni “believes the way to get there is within Italy’s current international positioning.” And she’s clearly committed to it: on Wednesday afternoon she met with the American chargé d’affaires Thomas Smitham to discuss the Italian and global response to Russia’s invasion of Ukraine.

However, not everyone in the Italian centre-right field possesses such clarity. The entire coalition voted in favour of sending arms to Kyiv, but several ambiguous positions remain. Starting with Matteo Salvini’s League, the party that led the centre-right until a year ago and now is trailing Brothers of Italy in the polls.

Mr Salvini, a former interior minister and deputy prime minister, has repeatedly demonstrated his closeness to Moscow in the past; in one occasion he had called Mr Putin “one of the greatest European leaders.” In the past days he has strongly condemned the war and aggression, calling for a “peaceful solution” to be found “as soon as possible” (but generally abstaining from directly naming the Russian president or the invading country).

Yet there are those who dispute Mr Salvini’s basic ambiguity. Initially, the leader seemed sceptical about sending arms to Ukraine and uttered phrases like “not in my name”. Others recall the agreement of collaboration and information exchange, which the League and United Russia, Mr Putin’s party, signed in 2017. That’s still active, although the Italian party called it a“dead letter”.

Among the great absentees from the public debate is also Silvio Berlusconi, former prime minister and leader of Forza Italia. A tycoon who has been four times at the head of the Italian government, he has always boasted a friendly relationship with Mr Putin.

Recently Mr Berlusconi talked about the Russian president over the phone with PM Draghi. Those who know the former PM said he’s “astonished” in the face of Mr Putin’s decisions: “I don’t recognize him anymore,” he allegedly said.

Nevertheless, several members of the Italian Parliament have publicly taken a stand. The League’s own Paolo Formentini, deputy of the Foreign Affairs Committee, said “we are all NATO” as he spoke in the Chamber of Deputies.