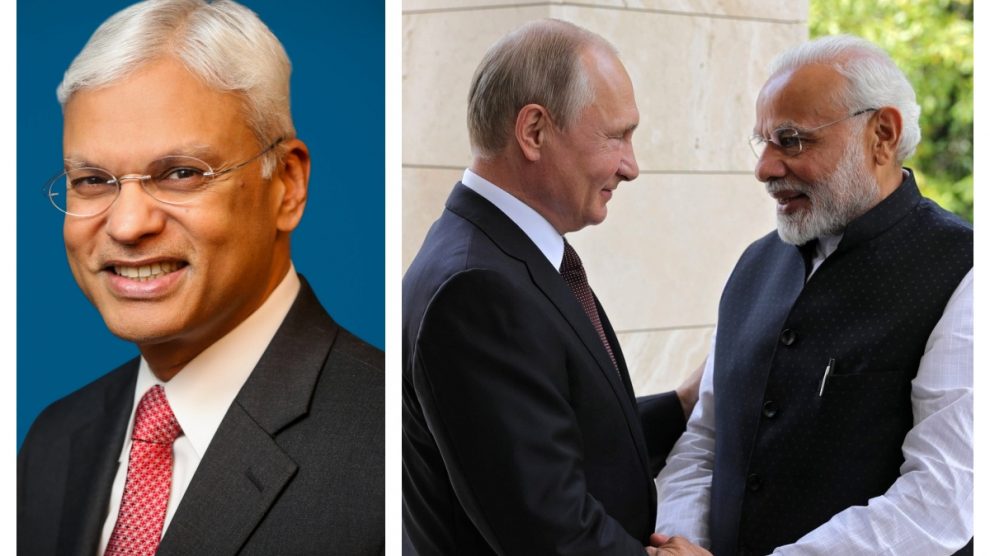 The Indo-Pacific and nuclear deterrence expert details why India remains neutral, buys oil and weapons from Russia and welcomes Lavrov. And why Washington, despite everything, maintains excellent relations with New Delhi. Here are three steps that Europe will have to take to come out of the conflict stronger than before

India has been at the centre of the (geo)political news for its attitude in the face of the conflict in Ukraine. The country abstained from voting for United Nations resolutions condemning Vladimir Putin’s aggression, both at the Security Council and the General Assembly, took advantage of the discounted price to buy more Russian oil, and welcomed Foreign Minister Sergei Lavrov after the conflict began. I turned to Ashley J. Tellis, Senior Fellow at the Carnegie Endowment for International Peace and former member of the US National Security Council.

This interview was edited for the sake of clarity and readability.

Mr Tellis, what is the reason for this neutrality, given that in the last year India has maintained excellent relations with the United States in the Quad (the forum that also includes Australia and Japan) and aspires to be a leading democratic player in the Indo-Pacific?

India and the US have had increasingly close relations for about 20 years, since the beginning of George W. Bush’s administration. In Washington, these days, they are certainly disappointed, but don’t think that the Indian government is comfortable with what is happening in Ukraine. It is not indifferent; in fact, it is definitely on alert. But it has shaped its response according to its own security challenges. And the number one challenge is China, and its plans for dominance in the region, just as with the US. Indians fear the strengthening of the Russia-China relationship, with Moscow coming out of the conflict weaker and even more dependent on Beijing.

Where does the good relationship between Russia and India come from?

In the past decades, Russia has “protected” India internationally, using its veto power on six occasions at the Security Council. When the Sino-Indian war ended in 1962, it was Russia that guaranteed military supplies. The MIG-21s that Moscow delivered then are still used in the Indian Air Force, and a large part of the current equipment, estimated between 60 and 70%, is Russian-made. That entails a continuous flow of spare parts and ammunition to keep their armed forces operational. To openly oppose it would not only bring Russia even closer to China, but risk losing its military capability.

However, in 2021, India’s largest trading partner was the US with $113 billion worth of trade, while trade with Russia was worth about a tenth. What happened in the meantime? Could Biden ask India to stop buying advanced Russian systems, such as the S400 anti-aircraft, which are at the centre of a dispute between Washington and Ankara (since whoever buys it cannot participate in the F35 program)?

India was a British colony, and at the time of independence its entire arsenal was Western. The goal was to keep the same armaments, but since it was not part of the American alliance system amid the Cold War, that was not possible. Since 2001, India has slowly started to diversify its suppliers: today they are American, French, Israeli. I do not believe that the US wants to impose the same ultimatum it presented to [Turkish President Recep] Erdogan: Turkey is a NATO country and is bound by the principle of collective defence, unlike India. The US government is realist and knows that it cannot influence this kind of decisions, although obviously it would not mind if Delhi were to free itself from Russian military dependence. The 2+2, i.e. the meeting between the Indian and American foreign and defence ministers, happened a few days ago. The joint communiqué was very measured.

What happened in India during Mr Lavrov’s visit a few weeks ago?

I can’t go into detail about the confidential communications I had with Indian government officials, but I can give you some elements. Mr Lavrov arrived with a specific objective: to thank India for its ostensible neutrality and ask it to maintain the same position. India publicly avoided criticising Russian moves, and [Indian President Narendra] Modi met with Mr Lavrov. But it doesn’t mean at all that they were enthusiastic about the foreign minister’s position. In fact, I’m sure the question hammered out in those meetings was, “when are you going to end the war?” Because nothing good for India can come from the conflict. I’m sure Mr Lavrov left without thinking for a moment that India supports what they are doing in Ukraine.

Neutrality in the conflict, the purchase of Russian oil and weapons, Mr Lavrov’s welcome. All elements that the US seems to take with surprising sportsmanship.

The first objective of the American government is not to alienate India and maintain a common attitude towards China. Because Russia is our problem in the short term, but in the long term it is China. The Biden administration has made a conscious choice not to compromise, for short-term advantage, key alliances for the rest of the century.

One issue you are familiar with is nuclear deterrence. Mr Putin’s threats are a spectre for Europe, and the US plans to allocate another $33 billion for Ukraine suggest a longer conflict than might have been expected. What will Russia do with its nuclear arsenal?

Realistically, there is no possible nuclear path for Russia. It is not at war with a nuclear power. It has a far superior conventional capability than Ukraine; it does not need to use atomic weapons to outmanoeuvre its enemy militarily. The threat? It’s an old-fashioned diplomatic move and there are several targets Russia wants to “hit.” First, there is the West: do not help Kyiv or there will be an escalation, until you get to the unthinkable. A way to force the hand of those who are helping the Ukrainians. But it is also a message to the Ukrainians themselves: if the situation will require it, Russia is ready to use incredible forms of attack. That is: think twice about resisting. I can’t predict what Mr Putin will do because he has already proven to be irresponsible. I hope he won’t, and I believe he won’t, at least if circumstances remain as they are today.

How is Europe viewed by the US and the Indo-Pacific region? It is back at the centre of the geopolitical “map” and it is a different Europe than two years ago: the pandemic has opened the eyes of citizens and (slightly short-sighted) governments to what the Chinese regime and being dependent on its supply chain really means. The war has done the same with the Russian regime and our energy dependence. Can Europe once again play a strong role in the international context, now that it has somewhat disengaged from these two actors that threatened to suffocate it?

This US administration has made a great effort to reconnect with Europe because it feared that the Trumpian legacy would alienate a historic ally. A Europe that views the US as an unreliable partner is very dangerous for us. It is our oldest ally and is still home to innovation and technology. We wanted to re-engage Europe because there are security implications, economic implications, as well as technological dominance of our rivals. China in particular saw Europe as the last “source” of technology available, since that sector in America and Japan was precluded.

The war in Ukraine has put Europe in a very bad situation, but this crisis may also provide new opportunities. The US hopes that Europe will now take its role as a primary player in global security seriously. For some 30 years since the end of the Cold War, Europe has enjoyed the full benefits of economic dependence on China for goods and Russia for energy. And it has enjoyed US military protection without having to engage in international theatres too much. The conflict has woken up European partners and made them realise that they must take on a new responsibility in the security and defence framework, and build the capacity to deal with the crisis on its borders. In Washington they know that the main challenges come from the Far East, but they are power challenges. Those coming from Russia are challenges of weakness.

With Moscow, Europe must take the driver’s seat, and the US will act as reinforcement. With China, the opposite is true: we will be on the front line, but our European allies must be ready to back us up. If the Europeans make difficult but far-sighted choices about energy dependence on Russia; about the Chinese threat, both value and economic; and finally, about investing in military spending, then I believe we have a very good chance of thriving in the future.

Draghi and Yellen’s speeches at the Atlantic Council
Enduring love: Italian populists still have the hots for Putin