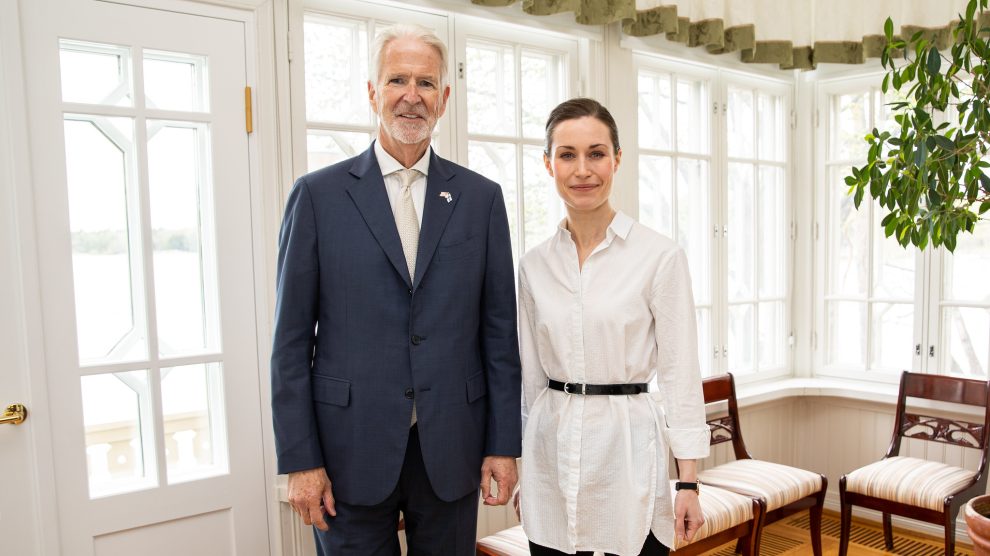 Douglas Hickey recently became the new US Ambassador in Helsinki at a historical junction. In the face of Moscow’s aggression against a free and sovereign country, Finland and Sweden decided to join NATO. Here’s his interview with Decode39

On Finland joining NATO: “it’s a historic moment for the country, [and] it’s been coming for a long time. And it was really propelled by the actions that President Putin took not just in February, but when he first invaded Crimea.”

On Turkey’s opposition: “I think we need to be respectful of Turkey’s process, just like we are with virtually everybody else within NATO […] But the perception right now is that all parties will come together in a timely manner.”

On energy independence: “the Finns have been really thoughtful” and planned ahead of Russia. Also, the US plans to help its allies manage the energy crisis both at the government and the marketplace level.

On the war in Ukraine and its endgame: “We ought to support [Ukraine] in this conflict, in everything they’re doing. And it’s up to the Ukrainian people in government, as a sovereign government, to decide on what they’re willing to negotiate about.”

This interview was lightly edited for the sake of clarity and readability.

Ambassador Hickey, you arrived in Helsinki during a momentous occasion for Finland and Europe. What’s the atmosphere like in the capital?

It’s definitely a historical moment for the country, and it’s been coming for a long time – I’ve been preparing for four years. It really became propelled by the action that President Putin took not just in February but when he first invaded Crimea. That galvanised the people in Finland to reevaluate their desire to join NATO. And once that became apparent, the process moved along pretty quickly over here. I believe roughly 75% of the Finnish people are supportive of what’s taking place, which is pretty extraordinary. There’s a very unified view of the government and of the population about moving forward. And across NATO, too.

It takes all 30 existing NATO members to approve both Finland and Sweden joining. Virtually everyone has come out in support of it. Turkey said they have some issues that they want to address, and the Finns and Swedes are discussing that. But I think the view is unanimous among members: they want to find a way to get this done and get it done as quickly as possible.

Do you believe the process will move along quickly?

I think everybody understands the importance of getting it done in a timely manner. The same goes for the United States: [the Republican Senate minority leader] Mitch McConnell was here a week ago, and he said he wants to get it ratified before the August recess. Which I think shows the degree of bipartisan support to get this done. Other countries, including the UK, France, and Italy, have said they’re very supportive.

Turkey, however, keeps opposing the two countries’ accession. Is there any leeway to solve this?

Yeah, I think there is. I also think we need to be respectful of the Turks in their process, just like we are with everybody else in NATO. Serious conversations are taking place. But like I said, the perception right now is that all parties will come together and will come together promptly.

President Putin threatened repercussions and cut off gas flows towards Helsinki. And yet it seems as if this energy blackmail isn’t really working out. Is there a lesson here for the rest of Europe and its energy resilience?

The term resilience is a really good one in this context because the Finns have been preparing for energy independence for a long time. As you may know, they expect to be carbon neutral by 2035, which is well ahead of many other countries, including the US. When the Russians said they would cut off natural gas supplies to Finland, Helsinki announced a liquefied natural gas deal with a US company called Excelerate, which will be available before the winter season – in Q4 of 2022. That will mitigate what Russia won’t supply.

Will the United States help in filling the EU’s energy scarcities?

President Biden has said that he’s willing and able to help our allies on energy-related issues. On the commercial side, we just mentioned one company, but there are multiple companies doing interesting things – including from a green perspective. I think they will be helpful, both in the short and the long term. Our commitment is long and consistent to helping others in that effort.

How will NATO change with the entrance of Finland and Sweden?

The addition of Finland and Sweden is a fundamental contribution to NATO. Both can boast very effective naval and air forces. Also, Finland has just signed an agreement with Lockheed for 64 F-35 fighters, which makes them one of the strongest Air Forces in all of Europe. Quite frankly, those two countries joining strengthens all of the other countries within NATO, regardless of the region that they happen to be.

Is this a defeat for Mr Putin?

Well, I think it’s good news for the world, and it may be bad news for [Mr] Putin. But this is all self-inflicted; without his actions in Crimea and then again in February, this probably would not have happened as it happened. So if there’s an issue here, President Putin ought to look in the mirror because that’s who really caused it. By virtue of his actions, other countries had to take their own actions on defensive security. And they did it expeditiously. I think that’s really positive, not just for Finland and Sweden, but for all of NATO.

Where do you believe the war is heading, considering there are different ideas among allies on countering Mr Putin?

I think there are two parts to that. One is from a military perspective, and from that side, the alliance of all countries involved just needs to keep its resolve. And I have a high degree of confidence that’s going to happen. The fact that countries have come together and provided equipment to Ukraine is pretty remarkable; the US, for instance, just passed a $40 billion piece of legislation to help out. The other side is humanitarian, and I think the alliance is really tight and focused on providing humanitarian support to Ukraine too, which I think is going to be critical.

There are discussions about the peace process. Must Ukraine compromise on its occupied territories?

Why education is Italy’s extra strength in North Africa
Beyond energy. Italy and Algeria seek a strategic dialogue