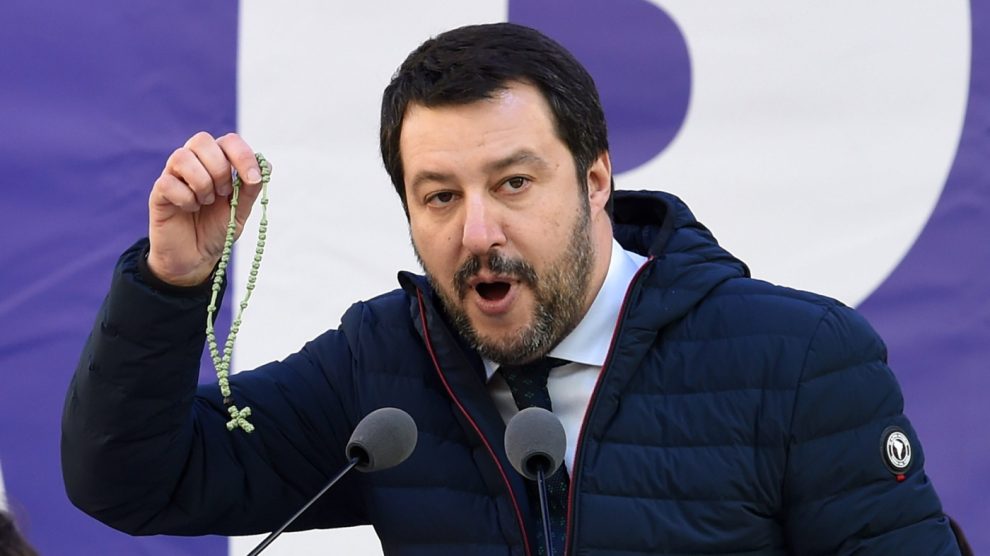 The League’s leader abandoned the cornerstone of his 2018 electoral campaign, Euroscepticism, in favour of a new slogan hinged on religious ambiguity. Although the religious electorate no longer exists, Salvini’s League seems bent on taking a page out of Patriarch Kirill’s playbook. Foggia University’s Pasquale Annicchino gives his expert take

Betting on belief. On Saturday, the League’s leader Matteo Salvini presented his party’s new electoral slogan, which had already appeared across Italy’s cities, stripped of any political reference. One word: credo, which is both the present first person of the verb credere (i.e. to believe) and a term indicating a religious confession (i.e. creed, faith).

And linguistic ambiguity. The expert noted how the classic themes of Euroscepticism, hallmarks of the League’s previous electoral campaigns and political programmes, have been significantly downsized in the current one. He believes it’s no coincidence.

Filling in the gaps. Another factor driving the League’s leader to use the religious element is the Catholic Church’s “diminishing activism on the Italian political front,” said Mr Annicchino. “Francis’ papacy focuses more on international issues than Italian ones,” in strong discontinuity with the past.

The strategy. So how did we go from Euroscepticism in 2018 to credo in 2022? The expert believes that the underlying message – concerning the centrality of the religious issue, or at least identitarian issues – is the result of the search for a carrier element, a messaging forestay, capable of powering the League in a different context than 2018.

The international connection. The League’s use of religious symbolism “is a product of Mr Salvini’s international connections with the global religious right […] In the centrality of the religious question lies an obvious reference to [Russian Orthodox Patriarch] Kirill and to the framing of the Russian debate, as well as the world of ideas to which even the Hungarian PM Viktor Orbán and, paradoxically, some Republicans in the United States, pander: the Islamic invasion, supranational institutions, the decline of Western civilisation and LGBT+ activism, to give but a few examples.”

And the discrepancy. Nevertheless, the credo strategy “contains a paradox,” warned Mr Annicchino. “In fact, Italy no longer has a religious electorate as such, and it’s quite hard to reach a certain [section of it] using the religious element. This also emerges in some recent polls, according to which the citizens’ attention is mainly focused on economic issues.”

What fascism? Meloni speaks German too: here’s what she said
Economics and interference. Exploring Russian and Chinese influence in Italy